The Pirates of the Caribbean set the benchmark for all films about the buccaneers thieving on the high seas. It had family entertainment, a motley of characters that proved to be hilarious, and an eccentric lead who somehow overcame all the odds. However, while that series focused only on pirates in the Caribbean sea, the age of pirates and the idea existed wherever there was open water. The Pirates: The Last Royal Treasure, a comedy-fantasy-action-adventure drama, is all about just that.

Set in the 14th century around the Joseon era in Korea and perhaps in the Korea Strait, this Netflix Original focuses on Hae-rang and her pirates, and Wu Mu-chi and his bandits as they team up in an unconventional manner and aim to secure a lost treasure. En route, they find maps, people with selfish interests, caves, islands, and a sea of legends. All of these classic treasure hunt elements get included with betrayal, comedy, comically choreographed action, and intense fights. These somehow enhance the backstory about the group. They aren’t bloodthirsty pirates, but a bunch of misfits.

The comedy elements of this film are something that may delight younger audiences. There is a scene where the leads get tossed back on the ship through a blowhole in a highly cartoonish manner. Additionally, when asked for the silver, the whale responds with something that is silver rather than ‘the silver’. 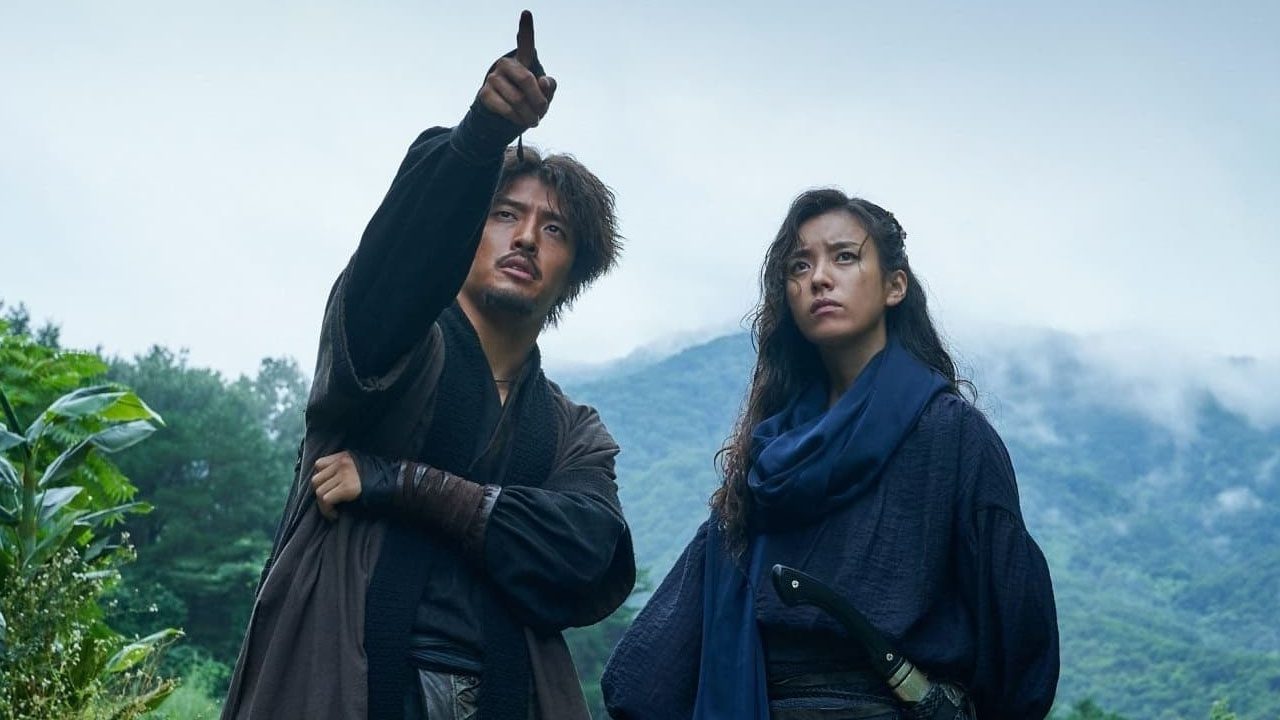 The sight of the crew trying to have a human conversation with the penguin lived up to a myth of men lost at sea doing desperate things, but nowhere in this film were they presented as men lost at sea. It only enhanced the buffoonery that existed in every frame where all the characters tried their best to act funny and childish, except for one.

As Hae-rang, Han Hyo-jo was a confident leader who has control over her men and is a confident woman out at sea. She is the only woman on the vessel and on both sides. Her line claiming that being in the front and taking responsibility for everyone else is what leadership is about, is what defines her character. She is not one to shy away from danger, as can be seen in that one scene where she lives up to her belief in the role of a leader.

Wu Mu-chi (Kang Ha-neul) was the entertainer as he tried his level best to go against Hae-rang, but secretly, his ambitions were different. His sly pursuit of Hae-rang is hinted at throughout the film right from the start, where he mistakes their fight as a playful one, but realizes that she is fighting to kill. A confident swordsman, the self-proclaimed best of the region, he lives up to his words as he proved the notion of one beats all. It is not only due to the opponents’ lack of skill as he holds his own, even when confronting the antagonist, Bu Heung-soo.

The leaders’ fight at the climax, accompanied by thunder and lightning, was delightful as with a clap of lightning, there appeared a marvelous shadow frame of two absolute warriors having a gladiatorial battle. Fight choreography shone in the intense sword fight scenes and may have made certain fans wonder why the producers didn’t opt for a gritty take on this film and make it more around Mu-chi and Heung-soo. It was unfortunate to see that relegated to the secondary plot.

It is also sad to see films have to resort to CGI overuse in most circumstances. This was dismal on the whole, with the jellyfish in the river under the sea appearing as though they were straight from Pandora. The concerned department may justify that by talking about it representing the mystery of the unpolluted ocean of a bygone era. While they can say that, the penguin in The Pirates: The Last Royal Treasure was poorly done. 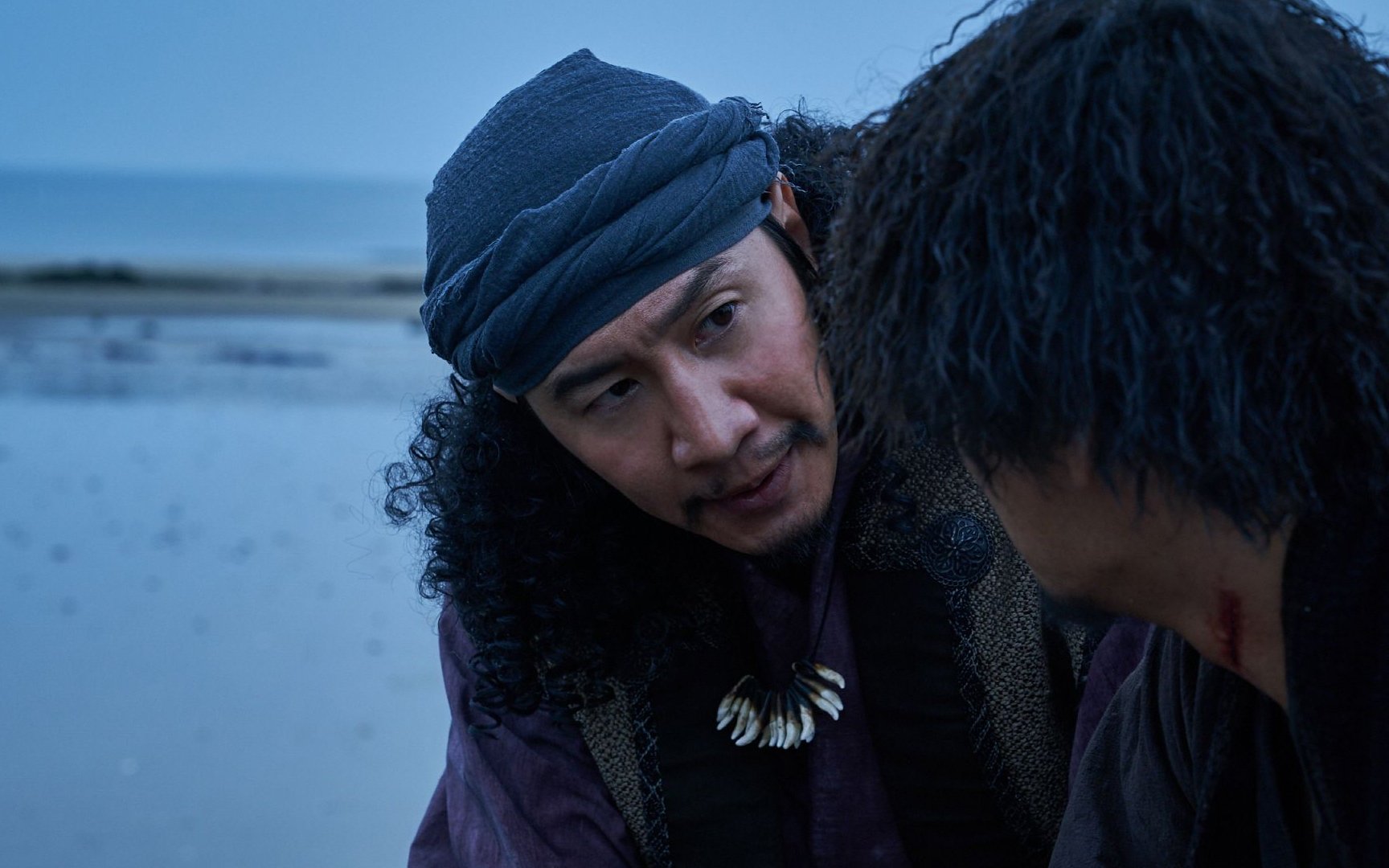 Another issue I had with The Pirates: The Last Royal Treasure was the fact that all the people on deck were extremely fresh. The grime and dirt of their travels through the sea seemed to be absolutely non-existent, making it appear as though they had stepped out of a tub. Has anyone seen Black Sails? Did the pirates on Hae-rang’s vessel perhaps make port off-screen and clean?

In aiming to polish and touch up the crew’s faces, the make-up team let this slip and it didn’t bode well for a film focusing on pirates on the high seas. It is unlikely that they deboarded or made port, as they plundered ships primarily due to the urge to find beef and appeared extremely disappointed at the sight of more fish.

Apart from being fresh as daisies, the pirates, and I’m talking about sword-wielding men who could temporarily hold their ground against an elite swordsman, seemed to stop when asked to stop and wait for Wu Mu-chi to wave at his crew. They even fell for the oldest trick in the book in terms of fight gags.

Their inefficiency beyond a point reminded me of Red Rackham’s men when they fought Sir Francis Haddock on the unicorn in The Secret of the Unicorn. The scenes of ships getting side by side with men jumping from one deck to the next were also something that reminded me of the Tintin flick.

Related to The Pirates: The Last Royal Treasure – A Matter of Life and Death [1946] Review: A Timeless Treasure of British Cinema

The Pirates: The Last Royal Treasure positions itself as a comedy and succeeds as it lives up to fans’ expectations. However, director Kim Joung-hoon should have noted that another subplot may have elevated the film if it were the main angle. Mixing everything up seemed very confusing. If looked at with the conventional pirate comedy films, nothing seemed surprising. Even when fell off the cliff, when he didn’t get on the boat, and when he took the sword; fans knew that this main character would be back. The underdeveloped villain (Bu-Heung soo) proved to be another flaw, as Mak-yi had more screen time than him.

Head in to watch this film, if you want to have asinine laughs for just over two hours. You aren’t really missing anything here. Perhaps you could re-watch The Curse of The Black Pearl if you crave a story about treasure? Maybe you can even re-watch the animated episodes of The Secret of The Unicorn and Red Rackham’s Treasure.

The Pirates: The Last Royal Treasure is a rehashed pirate comedy that can be skipped.

The Pirates: The Last Royal Treasure is now streaming on Netflix