The White Lotus (Season 2), Episode 3: After a really eventful season premiere which was a notch higher compared to its maiden season, The White Lotus decided to take things a little slow in last week’s episode 2 which was understandable.

But it is sort of baffling that other than some changes in character dynamics and subtle hints at things to come, nothing significant really happens in this week’s episode. Of course, Mike White Has certain plans in his head which will eventually be revealed, but the latest hour of the show is one underwhelming experience overall.

Our third day at Sicily starts with The White Lotus manager Valentina trying to start her day in peace with a cup of coffee at a local cafe, but her precious alone time gets ruined by a random stranger approaching her. As a really frustrated Valentina storms off the cafe and gets past a running Ethan on her way, we get back to our tourists.

Greg is leaving, for good?

To our surprise, we don’t see Tanya confronting Greg about what happened at the end of the last episode. In fact, it is unclear if she is choosing to ignore what happened by putting herself in denial or if she only saw him talking on the phone and didn’t hear a word.

But anyway, Greg is leaving for two days (at least that’s what he is saying) and we find a really sad, heartbroken Tanya and an apologetic Greg at breakfast. He does mention how grateful he is for whatever she did for him (quick refresher: he was a dying man last season, but now got a new lease on life thanks to expensive treatment) and says sorry for being bad at marriage.

After Greg leaves, Tanya urgently seeks a psychic and Valentina arrange a tarot card reader for her. 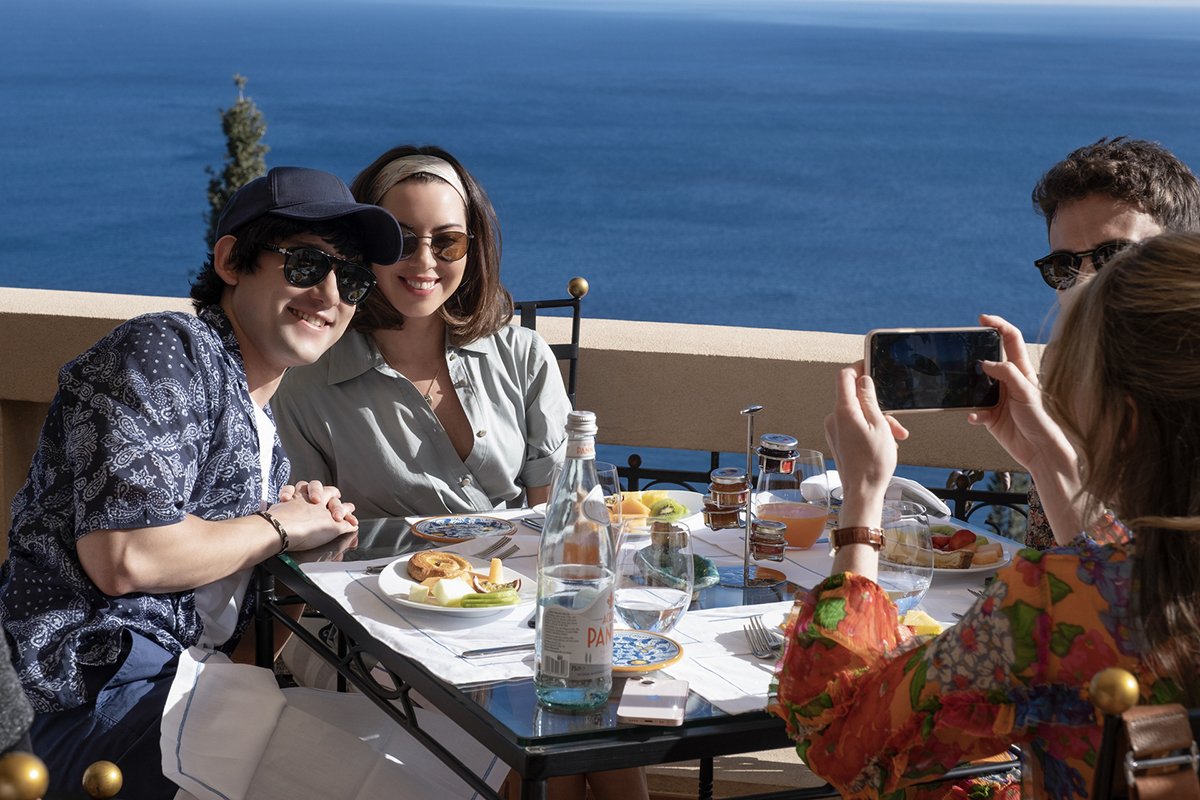 The patriarchal problem and the De Grasso family

Greg might get away from Tanya but Dom doesn’t have such good luck as he is confronted by his over-enthusiastic, obnoxious father about the two women from last night. Even though Dom denies he realizes that he can’t convince Bert so he plays it safe by pleading with his father to not tell anything to Albie.

Albie and Portia are having breakfast together and as we discussed last week, Albie’s extreme “niceness” has been a problem for Portia as she mentions that she did want him to “hang out” in her room last night. Even though there are no uncomfortable exchanges of words, the hints are more clear than ever. Portia asks Albie to be a little more aggressive, implying she is still interested in him.

The family leaves to see the locations of “The Godfather” and upon Albie’s request, Portia tags along. However, unlike the day before the tour doesn’t go that great as Bert starts to normalize and even glorify the overly “patriarchal” sentiment of The Godfather which makes Portia uncomfortable. She didn’t say anything but Albie doesn’t let it go and starts an argument with Bert and Dom about how problematic the typical male fantasy is; where a man gets to do whatever he wants including cheating but still gets to have “pasta” at dinner made by his loyal wife. This irks Bert as he finds it hard to accept the fault in his old-world beliefs. Dom tries to unsuccessfully play a medler while also trying to be on his father’s side.

Relief comes for Portia as she receives a call from a distressed Tanya who asks her to come back immediately. However, Albie blames Bert and Dom for making her “leave”.

Daphne and Harper go to Noto

It’s a new day and it’s a new improved Harper with a positive attitude toward life.

However, her day doesn’t start that nice when Ethan clearly ignores her sexual advances even after her attempt at being a morning person for him.

At the breakfast, Cameron and Daphne have an argument about their very different wishes for the day. While Daphne really wants to go to Noto, a South Eastern Sicilian town to explore the architecture and culture and do some Christmas shopping; Cameron has already booked jet skies for him and Ethan. Daphne finally decides to go on her own but upon her insistence, Harper happily agrees to join her.

Cameron and Ethan seem to have fun on their own. Ethan is persuaded by Cameron to invest some of his money with him after they get back. Meanwhile, Cameron receives a call from Daphne that they’re going to stay at Noto for the night. He gets surprised and maybe a little angry but soon shifts gears and proposes to Ethan for a night full of parties. As the men walk by to their hotel, Cameron looks at two women lustfully clearly hinting that he is anything but a faithful husband. Not surprising at all.

The tarot card reader looks at the cards Tanya has picked and declares as per the cards Greg is in love with another woman. Things get darker when she says Tanya is going to kill herself eventually. An absolutely broken-up Tanya tries to drink herself to death at the bar in the evening when she finds a man (Tom Hollander finally makes his entry) smiling at her from afar.

Is something good going to happen for Tanya after all, or is this man going to bring more trouble? We are hoping to find that over the course of the next four weeks.

Dom is trying really hard to be “good”

Albie and Dom have a conversation where Dom claims to be a “feminist” but Albie says Dom can’t fix anything unless he really changes himself.

In the evening, Dom tells Lucia and Mia that he can’t really see them in his room at night as his son might find out and he is actually trying to be “good”.

While having dinner, Bert sees the two girls from a distance and mentions them to Dom which clearly makes him uncomfortable.

Portia, Albie, awkwardness, and the stranger in the pool

We find a lonely Portia by the pool in the evening when she sees a stranger taking a dip in it. The stranger appears to be a hot young man and we can tell Portia is intrigued.

Albie comes into the scene and offers her a beer and asks about her day, which is so nice of him, of course. Then he makes a move but that doesn’t go well as Portia is really “fried” after a long, depressing day. Or is she?

The thing is, Albie and Portia are not going to work out anyway. So there might be a possibility of some kind of an intense “fling” happening between Portia and the stranger, something she is possibly looking for.

Daphne is no victim

Far from the madding crowd at the hotel, Daphne and Harper find themselves high on edibles in Noto where they have a discussion about their men and cheating.

Daphne reveals to Harper that she is aware of Cameron’s cheating but somehow she has accepted that as a part of a culture associated with “men”. She doesn’t consider herself a victim here as she has her own way of not losing it by pulling up abrupt stunts on Cameron like randomly deciding to stay at Noto.

Harper finds it hard to relate as she claims Ethan to be an “honest to the fault” man who would never cheat on her. However, when she calls Ethan dead at night he doesn’t pick up the calls, but does that make her suspicious?

And Ethan might be a lot of things, but not a cheater

After Dom ditches them, Mia has a brief conversation with Giuseppe who again gets back to his original sleazy self by asking her to be friends with benefits which upsets Mia.

The grim evening scene soon changes for the girls as they eventually join the two young men without their wives for the evening, which is obviously initiated by Cameron.

As expected, a party filled with booze and drugs breaks down inside the room and Cameron soon engages with Lucia sexually, affirming the theory of this guy being an absolute douchbag with zero consciences.

When Mia tries to make a move on Ethan, he refuses. Well, we still don’t know what is up with him, but he is definitely not a cheater. At least that’s what it seems like as of now.

Not many small things will matter eventually, but..

This episode does seem like a commentary about men and how faulty their worldviews and perspectives are about everything. And how the woman has to deal with that every day.

In fact, even the best male of this show, Albie, seems to be problematic with his over-the-top “I’m a nice guy” approach. Less said about the others is better.

Subsequently, this episode also talks about how men are inherently lonely no matter what they do. The title of the episode “Bull Elephant” also points at that.

Now we need to remember that this show did reference the legend of Testa Di Moro, which in fact is about the unfaithfulness of a man. All the subtle hints and also not-so-subtle (Cameron is a straight-up cheating asshole, also not to forget Greg) hints might actually lead to an explosive culmination in the end.

Victim(s): Okay this week we are putting our money on Cameron because he is a piece of shit and Daphne deserves better. Along with that, we are unfortunately unable to rule out Tanya.

Killer: How long is Ethan going to tolerate Cameron, after all?

Where to watch The White Lotus (Season 2)