It’s not to say that, for a video-on-demand release, this movie is lax in quality. After all, a movie written by Paul Schrader does deserve to be seen with a few raised eyebrows. The eyebrow-raising would be validated in some aspects because of the typical Schrader protagonist-reserved, prone to bursts of violence, religious, and yet comprised of shaky morals. He is not entirely God’s Lonely Man here, but the nickname of the Jesuit certainly indicates his propensity to torture, like the Jesuits of old.

The plot is simple. Ex-Con Neto Niente (Jose Maria Yazpik) is let out of death row because of the discovery of new evidence that acquits him. But as his counsellor, Carl Abrahams (Tim Roth), states, whatever the law states, the streets never forget. And now the Jesuit has enemies on both sides of the fence, from the lawmen who are keeping a close eye on him, to his ex-gang members who want to make their mark by taking on the Jesuit. But Neto is on the path to finding redemption and reconnecting with his son, who is with his wife and her new boyfriend, Vincent, a real estate mogul and an arms dealer.

The inciting incident occurs when gang members, initially hired by Vincent, and later revealed by some unseen hand, are hired to kill him. When that fails, in a spectacularly violent fashion, Julio, Neto’s son, is kidnapped, and now Neto is on the hunt for his son, not averse to dropping bodies along the way. 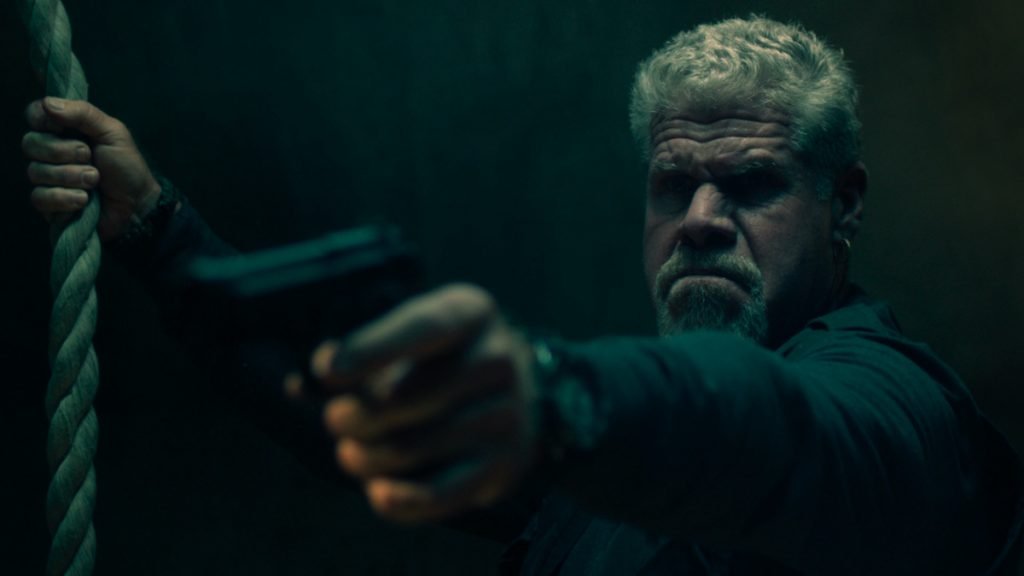 More than the plot, it is the action that truly excels. The brutality of its execution and the resultant gore enhances the gritty vibe of the movie. Director Alfonso Pineda Ulloda knows how to edit the action set-pieces into small, digestible chunks. So, while the action isn’t being thrown at the screen at every alternate moment, the build-up is done enough that the minimalism of the violence produces a healthy concoction of R-rated moments sparsely spread throughout the movie.

The tone of ‘There Are No Saints’, though, is unsurprisingly bleak and exceedingly self-serious. That is why moments between Neto and Jet Rink (Tommy Flanagan) are funny because Flanagan is playing an over-the-top Scotsman, and that elicits chuckles from you even at inopportune moments. But it doesn’t manage to offset the bleak moments, which the screenplay doubles down on at the beginning of the third act, with an intense torture scene, and then the final moments of the last act.

Ron Perlman, playing the final antagonist, is in the movie for ten minutes, but he leaves a lasting impression. However, the movie’s screenplay doubles down on the “what goes around comes around” proverb. An interspersed flashback of Neto torturing a woman is shown in the movie, which might make you wonder whether the movie is reciting the incident that sent Neto to prison. However, the final act resolves that question. Every action has consequences, and karma responds by giving us one of the bleakest endings I have seen in an action movie in a while.

Also, Read – The Killing Of A Sacred Deer (2017) Review: Revenge Is A Dish Best Served Twisted

As an actor, Jose Maria Yazpik has been exhibiting leading role charisma ever since Narcos and Narcos Mexico. Here, he shows his ability as a stoic antihero capable of internalizing violence, which explodes in precise bursts of calculated bloody brawls reminiscent of The Equalizer. Tim Roth gives one of the most recent steady performances as a smooth counselor and an ally to Yazpik’s Neto. Neal McDonough is always good and reliable as the slightly unhinged bad guy, while Shannyn Sossamon gives a good performance as Inez, one of the escorts at the strip club who agrees to roleplay as Neto’s wife to help in Neto’s plan to identify Vincent’s operation.

“There are no Saints” affected me heavily on the first watch, primarily because of its bleak ending. While there are moments where it feels like Schrader has a deeper point to make (Vincent buying land off of the Mexicans at very low prices and building condos to sell them off, Neto’s religious iconography and usage of his moniker), all of it feels like superficial layering in a revenge drama plot. There is nothing wrong with simplicity, and the effectiveness of the climax validates the simplicity, but having seen Schrader’s work, expectations were a tad bit higher than usual. As the preamble of this review stated, this is a four-star, three-star movie—it knows what it is and it does it well.

There Are No Saints Official Trailer

Everything Everywhere All at Once Explained: Ending & Themes Analyzed

She-Hulk: Attorney at Law (Season 1 Finale), Episode 9: Recap and Ending Explained – Whose Show was this?