If you aren’t aware of who Bartosz Bielenia is, chances are you would be bowled out by his performance in Oscar-nominated Polish feature Corpus Christi. In that film, Bielenia rose up to the tough task of playing a 20-something recently released from juvenile prison. He made-believe the half redemption he gets, disguised as a priest in a grieving town. Similarly, in Jakub Piatek’s “Prime Time” he plays Sebastian – another 20-something, who, on the occasion of the Y2K (eve of the new Millenium) takes a television studio hostage.

First premiered at the Sundance film festival 2021, “Prime Time” opens with Sebastian as he infiltrators into a television studio with a gun in his hand. This is a rather happening night at the studio as there is a live game show scheduled. Last-minute anchor changes and the rush of fresh energy is on the flow but there is also a feeling of unease foreseen. This is where the audience is clued to what is going to happen.

Sebastian soon cuts into the live broadcast taking the center stage for a few seconds. Piatek makes his film as realistic as he can. Instead of playing along with the usual hostage tropes, he makes Sebastian look and feel his age. The hostage situation here feels pretty unplanned as the broadcasters and the TV network people soon cut him off. While a situation like this one could go two ways – one feeling like an anxiety-induced confined space thriller with vigilante elements and the way that Piatek takes. 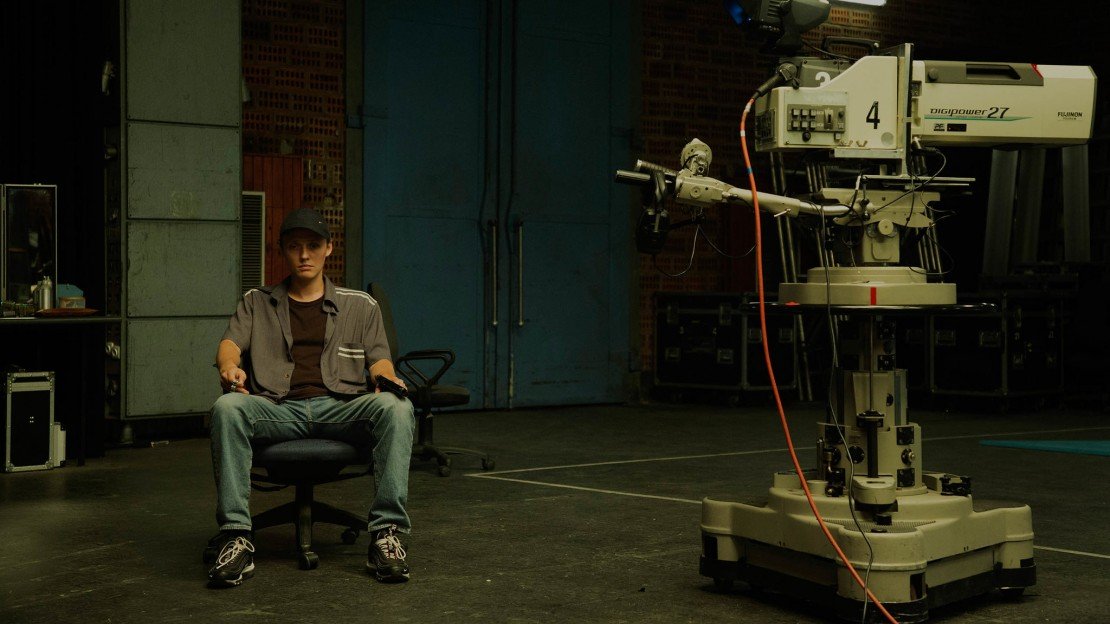 Here, the film plays out like a chamber piece that only replicates the satire of Sidney Lumet’s ‘Network.’ This is a slow-burn from the word go. The director’s intention is more inclined towards Sebastian’s internal dilemma. He takes his own sweet time to get the ball rolling and while it comes a little too late, when he gets there, you really sink into the situation that the young guy finds himself in.

What works for the film is the director’s ability to use the confined spaces to build a sense of unease. Sebastian takes the anchor and security guy hostage and the stakes always feel high since we don’t know the reason behind the young man’s actions. Films like these often end up feeling mundane after a point in time. However, Piatek introduces the police and the negotiators with major development into really understanding Sebastian’s point of view.

There’s a slight look into the whole individualism vs commercialism approach here but  Piatek keeps it low-key to focus more on the character’s motives. He uses Sebastian as a device to check on the privilege of the high-end people in question. He also questions their ethics and humility in order to bring the focus on the more pertinent questions about human nature.

That said, the soul of the film comes a bit too late into the mix. The atmosphere that the director conjures up with Bielenia’s fantastic performance and a thrilling score only run deep while the substance puts the question up. The premise feels empty in spite of hints towards the feeling of neglect that most Polish youths go through.

The mistake here is Piatek’s use of the other two key players in the mix. Magdalena Poplawska and Andrzej Klak play the anchor and security guard who are locked in with Sebastian. Since their characters are not fleshed out well, we don’t really see beyond their personal performances. Their motivations don’t nudge the film in the right direction and all of the slow-burn feels like an excuse to get someplace that feels far away.

“Prime Time” is a fine film that deserves to be seen. However, if there was a deeper look into how mass media and the need to be seen and heard come together, this would have been such a brilliant outing.

Why The Oscars Need To Start Recognizing Horror Films