Home»Articles»There Will Be Blood (2007): PTA’s Indomitable Protagonist & The Fundamentals of Business
Articles/Essays

There Will Be Blood (2007) – PTA’s Indomitable Protagonist & The Fundamentals of Business: Paul Thomas Anderson’s 2007 epic period tale, There Will Be Blood, is a magnanimous pictorial drama about the rise of ruthless Goliath, Daniel Plainview, who embarks on an ambitious quest crammed with perks & perils of Business, and the becoming of the insurmountable Monopolist he is. Set in the period of Oil Industry Bloom, receding 19th & early 20th century, There Will Be Blood rose to prominence as one of the greatest films in the 21st Century with critics extolling the Film’s ambition, dexterous screenplay structure, and anxiety infusing Background score, larger than Canvas Cinematography, virtuous Production Design and Oscar-Claiming Performance by its titular. Besides the quintessential period drama it is, There Will Be Blood (2007) is a film that gleams with relevance with the current times in similitude of Business tactics & fundamentals. It is a film that’s deeply steeped in the Metaphorical representation of Human Traits & Tenets carried by its Protagonist.

As we partake in the menacingly ambitious crusade undertaken by the Daniel Plainview, played by the nonpareil Daniel Day-Lewis, we can’t help but pick up the ageless lessons dropped by the character in his long stretch walk towards Success. A laudable success that entails endangering Life, Greece stained torse & limbs, breathless pits, irrevocably eroded spines, tarter teeth & stinky breath, gloomy lifestyle as an Oil Man. Though Daniel Plainview is a cold-hearted bawdy misanthrope whose contemptuously nihilistic attitude threatens the opportunity to stand & revere his arch (cinematically speaking), one can’t help but attest to the fact of brimming theories & excruciating sacrifices the character makes in order to claim the dream he envisaged as a loner with nothing but mud, ramshackle traction wheels, beat-up colleagues & A Life that’s as precarious as cryptocurrency. Although many acts perpetrated by the Character to ascend the throne are singed under scrutiny & deemed as deplorable, there is a non-ephemeral Life Lesson launched into the World by Daniel Plainview that is to never forsake your past, never compromise your present & never stop perceiving your Future.

Related to There Will Be Blood (2007): All Paul Thomas Anderson Films Ranked

If we pay much attention to see beyond the formidable beast of a character Plainview is we can see a fluffy Bunny that’s stuffed with a plethora of emotions & sensibilities. Daniel Plainview, as opposed to what he demonstrates to the World, is a self-conflicted individual who’s soft as a feather masquerading as a fox. The very true nature of his Heart lies in adapting the abandoned baby who grows to become his competitor, throwing Plainview into disdain. Of all the things said & done by the ruthless Oil Titan (Daniel Plainview), Paul Thomas Anderson triumphs in weaving the Character so translucent & conspicuous that as the audience we are overwhelmed to see through his rigid opaque armor-of-pride skin into the depth of his heart. To suffice the multi-dimensional Daniel Plainview in one word, He’s a Great Businessman with exceptional persuasive skills who mastered the art of Aristotle’s Rhetorical triangle. Daniel Plainview is a character treated with great ambiguity, but he is one thing for sure: A Great Businessman.

As Elon Musk once said, “It’s ok to have fragile eggs in your basket as long as you control what happens to the basket,” the Life of Daniel Plainview is a spitting embodiment of the aforementioned quote if we choose to replace the eggs with his dreams & basket as his Life. He thrives on a polarizing atmosphere, emanating a thick sense of narcissism depicted as a monopoly. In the film, Daniel Plainview gets to decide every incurred reaction in his Life because he’s meticulous in his actions in the first place. To be more precise, Daniel Plainview’s Life is a doctrine that contradicts Newton’s third law. Daniel Plainview’s every Reaction is a destined repercussion of his assiduously weaved action which is what makes a successful Idealistic Business Entrepreneur. Moving forward with that very assertion, here are the 8 extremely Entrepreneurial Business Lessons Daniel Plainview teaches us in the Film that helps every aspiring Entrepreneur in current times, especially those who just binged Shark Tank India and are in a desperate search to cement their entrepreneurial determination through Movies. 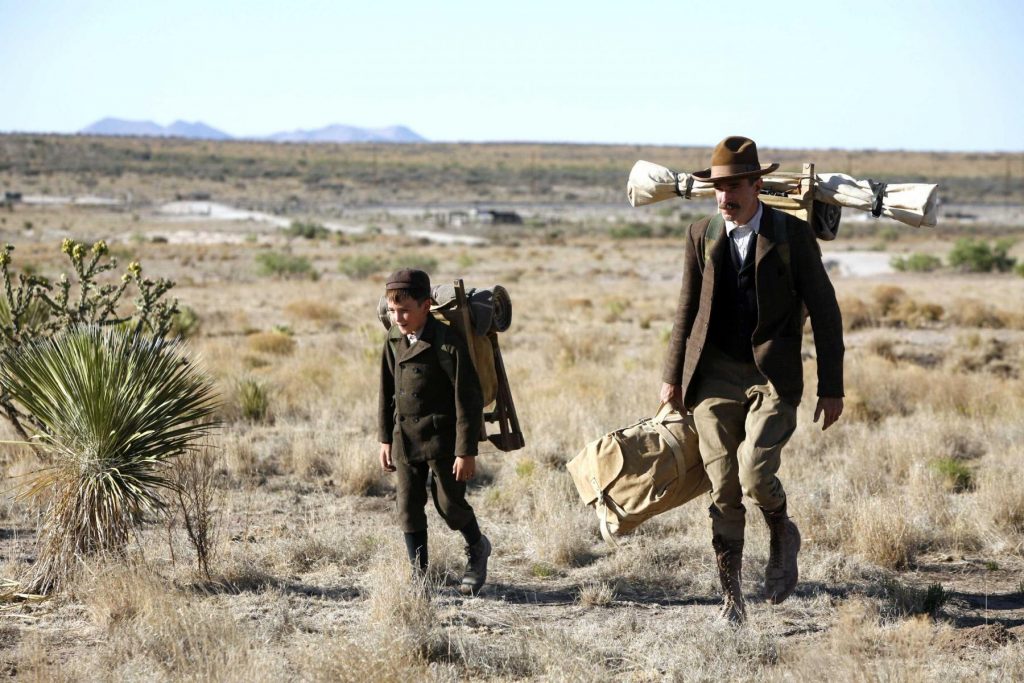 Sounds familiar? Something related to screenwriting I guess! But this is of a different context. When an unidentified Paul Sunday (Paul Dano) visits Daniel Plainview with a deal pertaining to the Oil Business Mr. Plainview never lets his enthusiasm overcome his judgment. He stipulates rather clearly about documenting the deal only after finding lucrative oil, not seepage. Plainview teaches us that “If” means “No” in the World of Business. In today’s World of evolving Ideas & Business tactics, the audacity in saying NO is richer than currency. Every deal corroborated by Mr. Plainview emphasizes the word “IF” clearly stating his dominance over contracts. The etymology of Business is convoluted so it’s imperative to state your stance succinctly.

It is extremely dangerous to let your mistakes slide out of your hands into the open sky. Letting it slide will only haunt your future with its omnipresence. Mr. Plainview’s approach to redo his mistakes was rather visceral & violent considering the fate of Henry Plainview who stupendously messed with the wrong animal in the jungle. The penance inflicted on Henry by Plainview is a symbolic representation of burying your mistakes rather than becoming a victim of one’s own. It’s a metaphor.

Related to There Will be Blood (2007): 10 Best Daniel Day-Lewis Movie Performances

Get Rid of Impediments

Daniel Plainview always embraced the dichotomy of him being reasonable & ruthless at the same time. Good Discernment skills, Acuity, Heedfulness, and Prudential Behavior are the prime traits that embody Daniel Plainview, also, a great checklist before writing a Protagonist. Seldom, Personal Life interferes with the Professional which can only be dealt with a certain degree of sacrifice. When a morbid accident in the form of a Gas blowout deafens H.W (adopted son of Plainview) thus making his existence – cumbersome– to the business compelling him to bid adieu to his endearing son. Success is an amalgamation of choices you make & the way you cope after you make a choice. The Director-Writer, Paul Thomas Anderson, makes no mistake in showcasing both the facets of his characters conclusively to make the Protagonist more realistic, honest, sensible & grounded.

There’s no magic, it’s the Magician’s beguiling ability to elude the eyes of his audience that does the trick! Daniel Plainview precisely knows what to offer, when to offer, in return for his needs. In the integral scene where he promises the inhabitants of little Boston about leasing their lands, he only emphasizes what they get in return (schools, agriculture, etc…) not how he will be profited by the deal. Always be on the offering end that grants Power.

Show the World your Good side

Daniel Plainview is a man of many words and tricks under his sleeve. Many of his attributions are elucidated to the audience in the first act & that’s where the film keeps the audience in the judgment seat. Extrapolating your character completely is a great screenplay technique to make the audience act as invisible messengers liaising between the Protagonist and the rest of the characters. By doing so, every decision the character takes has an equal and opposite reaction in the audience. The people steeped in his world only know his good side, making his path much easier to weasel his way to the top. 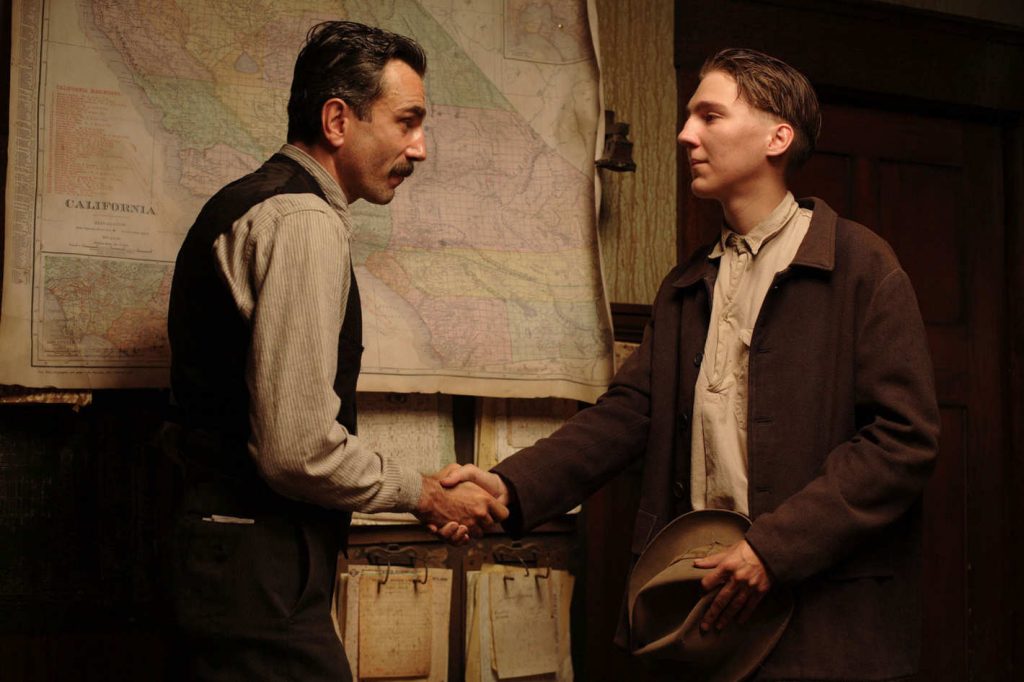 The fragile relationship between Mr. Plainview & Pastor Eli (Paul Sunday’s twin brother) plays a crucial role in justifying the Rise & Fall of Daniel Plainview. The burning religious conflict between the two integral characters (each representing Capital & Religion) on the cusp of consuming each other makes an awful lot of impact on screen. When a piece of land acts as a hindrance to lay pipes, Daniel Plainview succumbs to those religious rituals leading him to a humiliating public confession orchestrated by Eli. Daniel Plainview can go to any extremes to acquire what he wants. So he acts! Repressing the urge to react to get what he wants.

Get Your Hands Dirty

Great Leaders are People who endured much greater ordeals. They never hesitate to get their hands dirty. The film opens with the exhausted yet optimistic Protagonist scraping the mud inside a cavernous shaft to find silver. He iterates multiple times despite his frail beat-up mien with incorrigible persistence. Fundamentally, getting your hands dirty does not necessarily imply plugging into action under any circumstances. It speaks about the Individual mindset and motivation thus developing a strong state of mind. In the film, Daniel Plainview seldom relies on his crew & labor. His adept dexterous skills are demonstrated throughout the film keeping him buoyed amidst the rest. He never sought Luxury while building his empire. Great Businessmen stop for no reason!

No pun intended! This does not imply Daniel Day-Lewis’s laudable practice of never breaking the character. While promoting his Film (Phantom Thread) on Jimmy Kimmel PTA famously answered a question about Daniel Day-Lewis’s approach saying “You don’t go to work with Daniel Day-Lewis, You go to whoever his character is.” Learning the ability to never break your character is a cornerstone for success as long as we are speaking about soaring in any particular field. Character balances the outer world with inner zeal in a pristine state. No matter what the circumstances you’re engulfed in Never Break Your Character and Never Succumb to the consequences.

With all that being said & done, the celebratory oeuvre of PTA is a conflux of Writing, Art & Filmmaking that is contagiously inspiring to the budding Filmmakers and Aspirers all across the world. Over the decades, Cinema has garnered an indisputable reputation for shaping Human Behavior & Character through intrusive Writing & Imbuing Art that thrives with a Purpose. There Will Be Blood (2007) is a Cinema that is beyond what we see & comprehends as it will forever bear the crown of Quintessential Cinema that taught the World a great lesson to live by: “When Life gives you Milkshake, make sure to find the longest straw.”