The film doesn’t deny the harrowing emotional impact of the sexual abuse on Una, who now equates intimacy and connection with another male only through sex. But while focusing on the horrendous aftermath, the writer also transcends the common cliched portrayal of abused and abuser. There’s enough ambiguity in the treatment of this subject which we think of it to be clear-cut.

Inquiring into the subject of child sexual abuse on cinema is an arduous task. It should be inherently unsettling, purge the societal cliches adjudged on the subject without tackling the sexual perversions and emotional anguish in a blatant, insensitive manner. Scottish Playwright David Harrower successfully accomplished this task through his acclaimed 2005 play ‘Blackbird’. The film version Una (2016) is directed by Australian theater director Benedict Andrews and the script adapted by Mr. Harrower himself. Una is Benedict Andrews’ first feature film, although he is pretty familiar with the subject. He has directed the play onstage in Berlin. But what’s surprising is Andrews’ smooth transition from the mechanics of stage direction in order to incorporate a relevant and robust film form. Una is the tale of two people locked inside their mind and confined to a giant industrial block. One is a damaged young woman and the other is a seemingly ordinary middle-aged man. But the average looking guy had a three month sexual relationship with the woman, when she was a 13 year old, eventually leading her to emotional desolation. Fifteen years later, she confronts him in a closed space where there is no escape from the words and through words the unspeakable, unresolved reemerge to the surface. 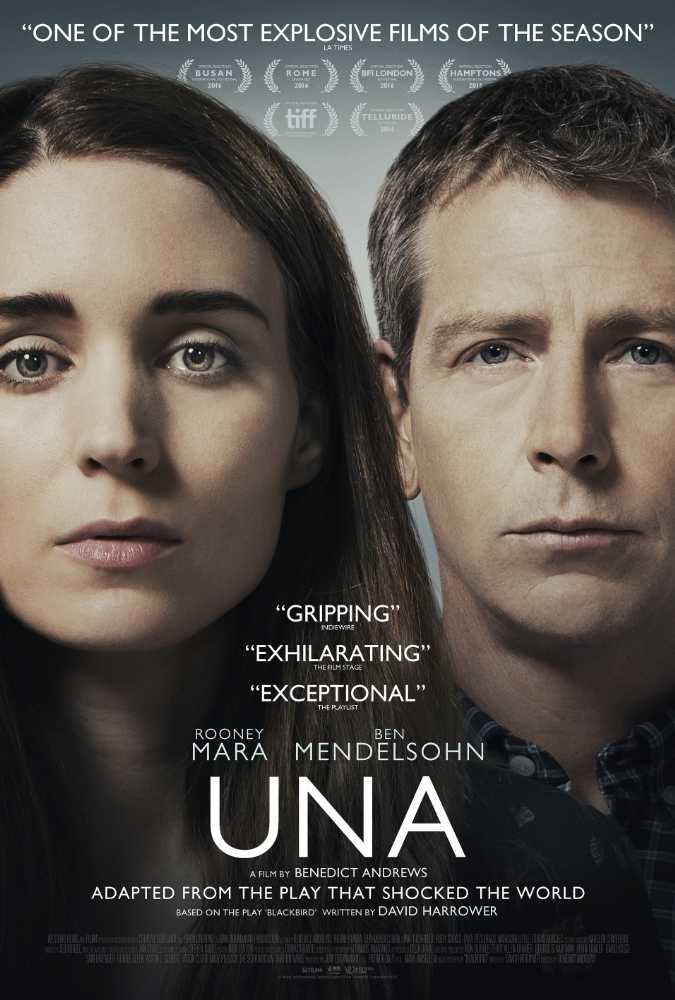 The eponymous sexually abused girl is fiercely performed by Rooney Mara. When we first see her she is in a dance club, her face lit by flashing strobe lights. She stands like a brooding statue amidst the throbbing music and swaying bodies. Later, in a bathroom stall, she has sex with a stranger. Cloaked in glittering silvery dress she walks to home in the dark street. Prior to this scene, we observe the 13 year old Una (Ruby Stokes) walking into her neighbor’s backyard and smiling while standing in front of a shed. Both the movements through space conveys the emotional truth of the character or the lack thereof. The adult Una, next day, gets ready for work after coldly greeting her mother (Tara Fitzgerald). However, instead of going to work, Una takes a detour and arrives at a factory. She asks for Ray, but an young employee (Riz Ahmed) identifies him (after Una shows a photo) as Pete (Ben Mendelsohn). Upon seeing Una, Ray turns white and leads her to serpentine corridors of industrial estate into big glass box that serve as male workers’ locker room. Their last encounter was at the courthouse when teenage Una gave testimony through closed-circuit television.

Ray asks her, ‘What do you want?’ Is it revenge since Ray got away with four-year sentence – a mere pittance for damaging Una and her family’s life? Or does she simply want answers – on why he chose her or why he left her after having sex? Initially, Una just says, ‘I want to see you’. Their long conversation unfurls in locker room, bathroom, and other secluded places in the factory and is often cut to the past, tracing Ray and adolescent Una’s step-by-step progress of the affair which eventually led them to sleep together one evening in a cheap motel. Ray promises that he is a changed man and he is unlike those ‘sick bastards’ – pedophiles (that it was just one time thing). He fleetingly recalls the brutal reception he received at prison. Ray has now rebuilt his life from the  scratch and is married. The agonizing part of this confrontation is the acknowledgement of Una’s attraction towards Ray. She was fascinated by him back then and even at the present she distressingly yearns for Ray’s intimacy. Such shocking aspects raise difficult questions about the uncertain boundaries between abuse and love.

Director Benedict Andrews seems to have adept understanding on the contrasting qualities of theater and cinematic medium. Considering Andrews’ experience on stage, the film adaptation could have easily turned into filmed theater. However Andrews was blessed with gifted actors and expert technicians (including Yorgos Lanthimos’ cinematographer Thimios Bakatakis, Editor Nick Fenton, and composer Jed Kurzel) to sharply deal with myriad of bleak emotions through cinema’s two defining aspects: space and time.  While Una tries to find a way out of her psychic labyrinth, she is placed inside claustrophobic enclave – the perfect marriage of cavernous mind and space. The conversations inside the square glass room or in the bathroom lay bare the manipulations and lies to confront the act of pedophilia in immaculate details. Other brooding exterior shot of places substitutes the dark deeds happened inside it. For example, while verbally divulging the details of Ray’s tryst with Una in a park, the camera is locked at a tall, dense hedge, leaving our disturbed mind to conjure the physical details. 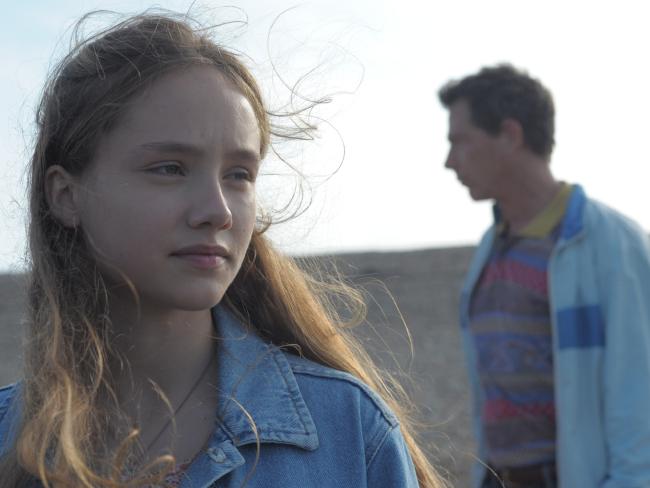 Director Andrews cleverly inter-cuts between two different time-lines, intertwining the idea of how past continues to disturb the contours of present (Andrews cites the Alain Resnais’ masterpiece Hiroshima Mon Amour (1959) while discussing about his experiment with time and space). A neatly assigned flashback may only inorganically elevate the story’s dramatic quotient, whereas Andrews’ inquiry into time conveys a lot about the conflicts faced by the two characters. Whenever we possess unchecked rage towards Ray in the present, we glimpse into the fleeting past where he seems to be more driven by weakness rather than conniving evil mind. Or whenever we admire Una’s courage to confront Ray on his unpardonable mistake, the narrative cuts to teen Una’s attraction towards Ray and her complete understanding of their relationship. Andrews and writer Harrower deliberately wants our perceptions of Ray and Una to keep changing.

Harrower doesn’t deny the harrowing emotional impact of the abuse on Una, who now equates intimacy and connection with another male only through sex. But while focusing on the horrendous aftermath, the writer also transcends the common cliched portrayal of abused and abuser. There’s enough ambiguity in the treatment of this subject which we think of it to be clear-cut. It would be repulsive or shocking for viewers to observe the hint of joined responsibility for the commitment of adult crime. Perhaps, these grueling suggestions and lack of resolute answers sheds new light on the issue of child sexual abuse. Despite the controlled aesthetics and unique exploration of the theme, Una mildly falters due to its very limited narrative scope. The back and forth passages do become exhausting after a point. The whole psychological thriller part in the third act (which is said to be added for the film) seemed like a contrived effort to expand the context of the narrative (with Riz Ahmed in an under-written role). Rooney Mara incredibly conveys her deep-seated pain up until the final shot, but towards the ‘filmic’ end it becomes difficult to empathize with her character as much as we want to. It’s made clear that (from the start) salvation isn’t possible in this confrontation and the prolonged ending just repeats itself, failing to make us care. A lean 60-minute conversational drama would have been more effective. Nevertheless, we can’t fault Andrews for the narrative missteps. It would be interesting to see the next subject he chooses to enhance his exceptional directorial style.

Una (90 minutes) offers gut-wrenching movie experience as it tackles one of the taboo subjects in cinema. Actors Rooney Mara, Ben Mendelsohn, and director Andrews impart formidable strength to this excruciating study of memory, love, and abuse.