Home»Reviews»Films This Week»’83 [2021] Review: Not Spell-Binding Enough and Sacrifices Storytelling at the Altar of Entertainment
Films This Week/Reviews

When the Indian cricket team faces the West Indies cricket team for the second time in the 1983 World Cup, the latter’s ‘hostile’ game not only injures the Indian players but forces them to climb down their high horse of confidence. The Indian commentator, Farokh Engineer, played by Boman Irani, compares the match to a battlefield by its end and the players to battered soldiers. The director, Kabir Khan, widely popular for his directorial ventures, including Bajrangi Bhaijaan (2015) and Ek the Tiger (2012), which are mostly perfumed with nationalistic sentiments, spares no chance to take up this metaphor of battle seriously in an already high-strung sports drama that promises to upload the Indian cricket team’s journey from being a losing affair to the world champion in the game of cricket. 83, thereafter, is entertaining to watch but ultimately succumbs to the weight of patriotism forced upon it.

The narrative progresses linearly to track the Indian cricket team’s journey, from the warm-up matches to the final game. We watch them as they erupt in excitement after their first win and go on to celebrate with them as they uncork bottles of champagne after every match. It is a story of rags to riches for the team’s popularity, best expressed through a small press conference plot.

Earlier in the tournament, this conference housed a handful of journalists, but it went on to be flocked by innumerable press correspondents before the team’s final match. After their first win, we see Kapil Dev (played by Ranveer Singh) and Mohinder Amarnath (played by Saquib Saleem) scrubbing their match trousers in a bathtub full of soap while the others go out for drinks at a local pub. A small moment like this is dotted across the main narrative, allowing the audience to catch a break in-between the excitable matches.

I am particularly impressed by these informal anecdotes into the team’s success story, even if these may be fictional. It never lets these subplots, mainly involving family and personal relations, get into the way of the larger picture – the game of cricket. According to Bollywood’s recent trend in sports dramas, such as from M.S. Dhoni: The Untold Story (2016), a song to complement the relationship between the protagonist and his lady love has become compulsory. 83 breaks away from the tradition and limits its romances to a scene, only a couple of minutes long, before the world cup finale unfolds. 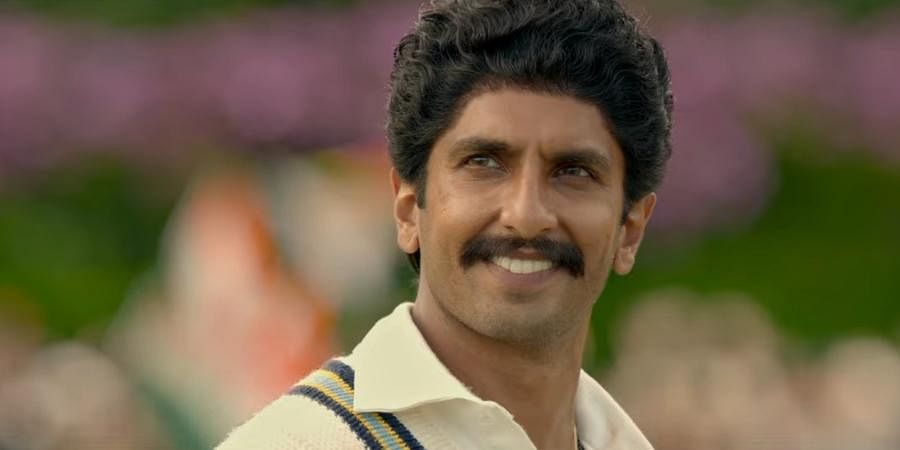 Ranveer Singh shines as Kapil Dev, or is it vice versa? Sometimes, it is difficult to tell. His acting skills make him malleable as he slips into the role of the Indian cricket captain with ease, burning with the passion to win and cleaning the mud off his shoes with the insults printed against his team by the press. It is beautifully captured in his expressions when he is informed by the umpire in the match against Zimbabwe that he has just broken a world record. However, it is the entire team of actors, and players, around Singh who deserves to be applauded for bringing alive the cricketers on the screen.

Written by Kabir Khan, Sanjay Puran Singh Chauhan, and Vasan Bala, the screenplay makes sure that every actor who plays the role of an Indian cricketer is allotted some screen time. Pankaj Tripathi, playing the role of PR Man Singh, the manager of the Indian cricket team then, and Deepika Padukone, who features Kapil Dev’s wife, Romi Bhatia, shine in their respective roles as well.

The narration makes a commendable effort to plant some Easter eggs, impossible to miss if you are an Indian and, primarily, a fan of Indian cricket. However, there are several characters, such as the Indian duo working in an English garage, who get more screen time than their sub-plots demanded, adding to the fluff around the narrative and not in the best possible way.

Some aspects of storytelling are hit straight through the roof into the wide world of imagination. For example, the hotline call that informs the Indian army stationed at the Indo-Pak border about the cease-fire from Pakistan’s end due to the World Cup final, or the Prime Minister’s public statement about India’s game. Some of these are very advertisement-worthy, and I can’t tell if I approve of their overindulgence in the film. Although necessary to produce an environment that can sprout optimum nationalism in the hearts of the audience, the director overshoots the mark. We are left with too many subplots jostling for attention by its end which did bear down upon the moment of India’s victory for me. Too many songs spoil this broth, especially the change in background score whenever the West Indies cricket team appeared on the screen, assigning to them the antagonists’ role.

Also, Read: “83” Authenticity at the heart of New Sports Drama

Further, a last-minute racist slip did make me crook up my nose in disapproval. The dialogues, written by Kabir Khan and Sumit Arora, refuse to stay with you after the movie has ended. By its end, a very tear-jerking, emotional journey, no doubt, 83 leaves little to no impression at all, thanks to the brand of Kabir Khan’s show of nationalism that gives us a sugar-rush.

83 is all things that Bollywood, and most Indians, love – cricket, drama, and Ranveer Singh. The concoction might not have been well balanced, but it delivers the story of the Indian cricket team’s journey in the 1983 World Cup almost satisfactorily. I’d personally like to declare the game of cricket itself as the Man of the Match after this film. Released on the big screen today, 83, with its 161 minutes long runtime, doesn’t take a toll on patience and deserves to be enjoyed in a theatre, amidst a wave of Indians proudly cheering at this historical remake.