The movie is visually and technically so spectacular that it has been and can be reduced by some critics as being superfluous. But superfluous the movie is not. “People usually consider walking on water or in thin air a miracle. But I think the real miracle is not to walk either on water or in thin air, but to walk on earth. Every day we are engaged in a miracle which we don’t even recognize: a blue sky, white clouds, green leaves, the black, curious eyes of the child- our own two eyes. All is a miracle.” writes Nhat Hanh. But to most people, it takes a life altering journey that Ryan (Sandra Bullock) takes in the movie to realize it.

One of the sequence wherein the protagonist (Ryan) is struggling to contact Earth for help and gets instead a Chinese on the line and soon hears the voice of a child is a sequence comparable to the famous montage of 2001: Space odyssey difference being that the philosophy behind the odyssey is existentialist, while in Gravity is Buddhist. He has said, “The most important thing for us is that all of this stuff, and all of this technology, are only tools to achieve the cinematic experience and cinematic moment. For us, the conceptual aspect behind it and the theoretical aspect of what we were trying to convey was more important. All of the technology was in service of that.”

This road trip movie is filled with major life lessons, which are brought to the audience in small pockets with brilliant performances and witty dialogues. Gael García Bernal is one the most underrated actors of the recent times and he gives a valuable performance along with his fellow actors that makes this movie nothing short of a masterpiece. The movie lightly brushes on the issues of immigrants and discretion that is attached to a person’s origin. While the climax of the movie has the deepest impact, the entire movie is a joyful ride that one shouldn’t miss. With quotable quotes like, “Truth is cool but unattainable… the truth is totally amazing, but you can’t ever reach it.” or “Life is like the foam of the sea. You must dive into it. ” the movie becomes a remarkable watch. 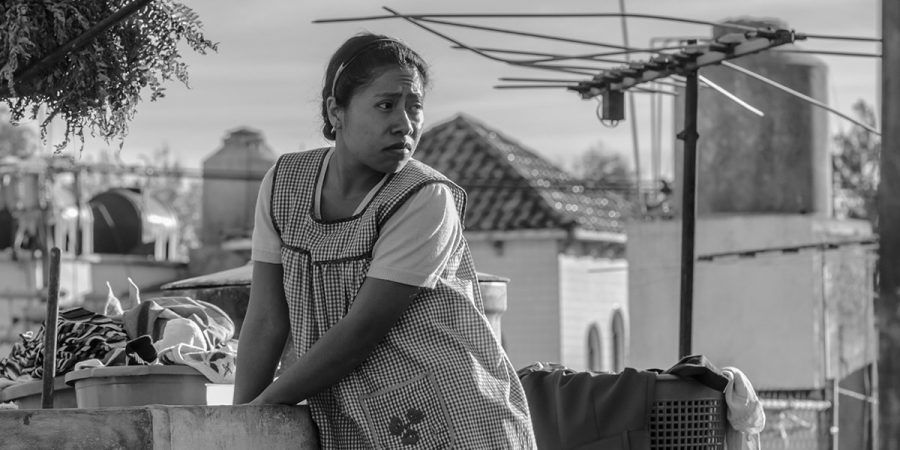 Roma is a staggering achievement in narrating the most intimate and personal work of Alfonso Cuarón. The film feels like reading the most vivid and eloquently written chapters from a personal diary of an exuberant child. Brought up by a devoted woman (first-time actress Yalitza Aparicio) who is nanny and housekeeper, it’s a Cuaron’s love letter to all the nannies out there, who bring up the kids as their own. It’s tragic to find her lonely when the entire family is around her and depends on everything.

Roma is a heartfelt story of two women belonging to different social and financial strata struggling to keep together midst of personal tragedy and emotional turmoil and political uprising. The most noticeable thing – which I am sure Cuaron did out of respect – was that the camera never intrudes in the personal lives of the characters. Shot in 65 mm and glorious black and white, Cuarón let the camera glide inside the house as if it’s a character, keenly observing the family dynamics and piecing together their quotidian lives. It’s lyrical and heart-breaking.

Only rarely does a filmmaker tries not to be simply inspired by a book and bring it on screen but rather translate the book onto the screen. This is one of the rare and fair moments. The movie not only manages to bring the symbolism to it’s significant best but also makes the camera compassionate such that the audience can empathetically relate to the protagonists. He uses both the foreground and the background of the shots in sequences significantly. He has used symbolism wide ranging as the song “Arbeit Macht Frei” by The Libertines. “Arbeit macht frei,” meaning “Work shall set you free,” was written above the entrance at Auschwitz, to Pablo Picasso’s “Guernica” representing General Francisco Franco’s bombing of Guernica, Spain. The lead and supporting cast is uncanny in their respective roles especially Michael Caine as jasper and Clive Owen as protagonist Theo. But it’s the portrayal of the mother-to-be and her symbolism with Mary, mother of god, that’s numbing to the effect of tears that won’t come out! Needless to say, it’s a must watch.

The 10 Best Dysfunctional Family Films of the Decade (2010s)