In the opening scene of Saeed Akhtar Mirza’s “Arvind Desai Ki Ajeeb Dastaan” (1978), we witness a carpet come to life. The camera slowly pans around a village full of laborers who finish up different aspects of the same clothing. A gentle score rings into your head as the shot glides into a posh showroom where the carpet finally ends up. In a single transitioning movement the director establishes the basic difference in privilege. However, the scenes that follow actually touch the themes that the filmmaker wishes to touch upon.

When we first meet Arvind Desai (Dilip Dhawan) he feels like a committed and confident man who is good at his job. But before we actually meet him we also see him aimless roaming around in his car and the streets of Bombay. This mise-en-scène is carefully calibrated to dive into Arvind’s conflicting existence. The film – whose title neglects other adjectives to portray his tale as ‘weird’ becomes apt with every moving minute. Mirza’s film is a constant struggle about a person trapped in a privilege that he both enjoys and doesn’t understand.

Arvind Desai’s ‘dastan‘ (tale) is that of a drifter. He is constantly in motion but never actually satisfied with who he is. He has a little affair with his secretary ‘Alice’ but that interest doesn’t have any kind of spark. There’s no sign of physical intimacy as Arvind only takes her to a restaurant of his choice. He also stumbles onto a communist/leftist friend (played by Om Puri) whose ideologies seem interesting to him. However, this one time when he does end up sitting with him while he and his colleagues discuss the state of the country – he doesn’t have anything to say. He blankly looks out of the window claiming that he is not intellectual enough for the discussion. He is also not pleased with the way his patriarchal father treats his mother who has submerged herself in her holy books. 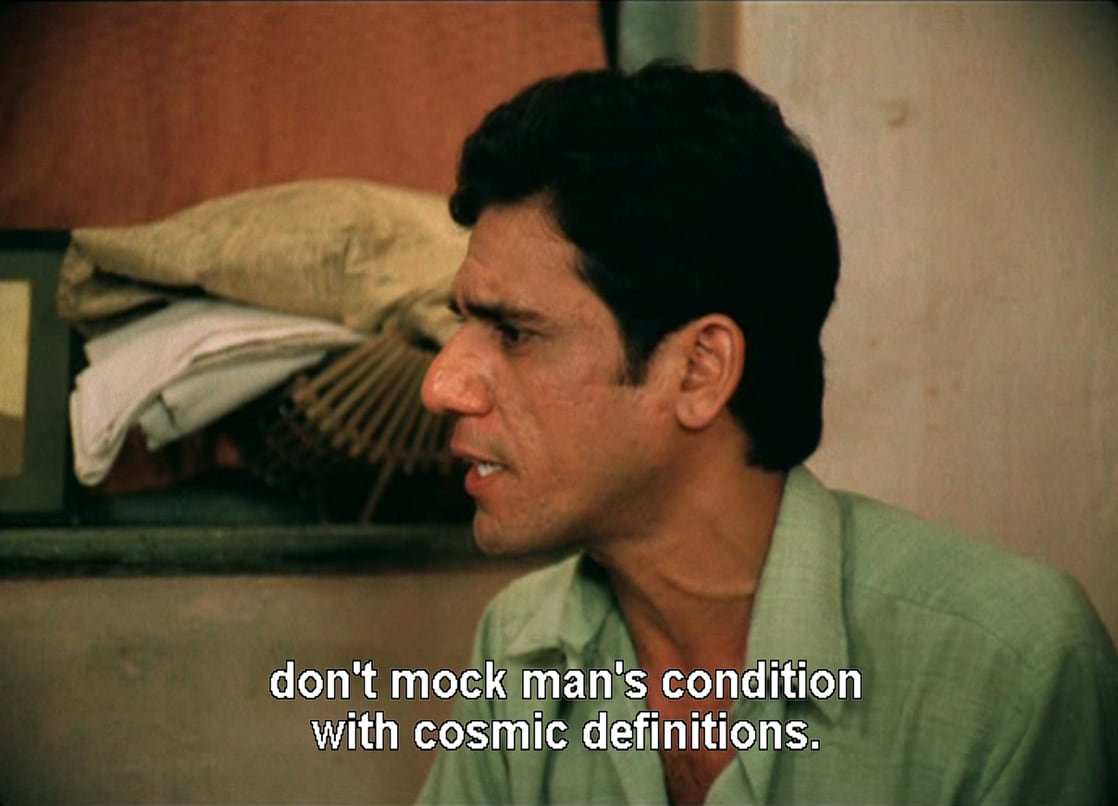 We see Arvind being considerate about social injustice when the middle-men of his business want higher margins. There’s a clue that he wants to take the side of the laborers who will be at loss here but we never actually feel that he’s in any kind of plight. The film never focuses on plot devices to bring Desai into a conflict. This is because there isn’t one. Arvind Desai’s greatest conflict is his existence. This is probably one of the very few films Indian films that actually deal with the existential question of an elitist upper-classman. When Arvind, in one of his quests, ends up in his sister’s apartment he is passive-aggressive about her existence. He is almost fuming at the possibilities that she is, in fact, living a life that is a lie. She condemns her posh livelihood, handling out a reality-check to her. In this particular scene, there’s also a sense of self-actualization. Arvind realizes that he is acting in a very difficult manner. Almost as if he is reveling in self-guilt.

Saeed Akhtar Mirza’s direction in crucial scenes seems heavy-handed. This might be because this is his first film after just graduating out of FTII. There are obvious lift-offs from legendary filmmakers but the cyclic, drifting feeling of this feature debut feels original in it’s setting. Mirza’s narrative feels really distant at times – almost exhausting and too random to really dwell into the tale but there are some really interesting filmmaking choices. For instance, the particular scenes where Arvind meets the middle-men in his office features a sequence where the audio cuts off once they move through various doors of the showroom. Hinting towards the capitalistic claustrophobia that is found in such official workplaces.

We see Arvind is uncomfortable working there but we also see that he is not focused on anything else in his life. Mirza manages to show us the tale but never manages to make us sympathize or invest in his plight on an emotional level. “Arvind Desai Ki Ajeeb Dastaan” is a truly existential drama about a man who is unable to perceive what his life is all about. Much like Govind Nihalani’s satire ‘Party,’ Mirza’s protagonist and his weird tale serve as a scathing critic on the cushy existence that the elite enjoy. He shows us the hollowness of the upper-class life through a person who is constantly trying to crawl out of it but simply can’t.