With Aadukalam (2011) and Vada Chennai (2018), Vetrimaaran has proved himself to be adept at engagingly dramatizing the social and political history of violent conflicts. He often zeroes-in on the theme of treachery, and the basic human response to it, revenge. And in the ensuing emotional upheaval, the lines drawn between friends and enemies get blurred. Vetrimaaran’s latest venture, Asuran (2019), loosely based on Sahithya Academy Award winning Tamil writer Poomani’s novel Vekkai (‘Heat’, 1982), once again delves into the history of violence between a wealthy, land-owning middle-caste family and a family of small-scale farmers (coded as Dalits). The core element in the narrative is familiar: the people without enough political or social clout are coerced to succumb to the higher powers, and peacefully accept their displacement.

Sivasamy’s (Dhanush) family, however, resists the power-hungry Vadakkuran’s (Naren) attempts to capture his little parcel of farming, land which foils their plan to build a cement factory. Asuran opens with Sivasamy and his 15-year-old son, Chidambaram (Ken Karunas) go into hiding after the alleged murder of Vadakkuran. Anticipating a ruthless reaction from the powerful family, Chidambaram’s wife, Pachaiyamma (Manju Warrier) and their little daughter also go in to exile. As the father and son wait for daybreak in a cold night on the top of a mountain, Vetrimaaran, the assured storyteller, starts to narrate the depth of animosity between the two families.

Character development is one of the strongest aspects of a Vetrimaaran’s film. Asuran seems to lack a bit on that department. The rebellious son, assertive mother, yielding father – most of the characters seems to fit under a label and weren’t bestowed with different shades. The villain characters are more one-dimensional. In Aadukalam, Vetrimaaran has created one of the best villains in Tamil cinema, and in Vada Chennai, a gruesome assassination scene was meticulously imparted with constantly changing temperaments of the bad guys. 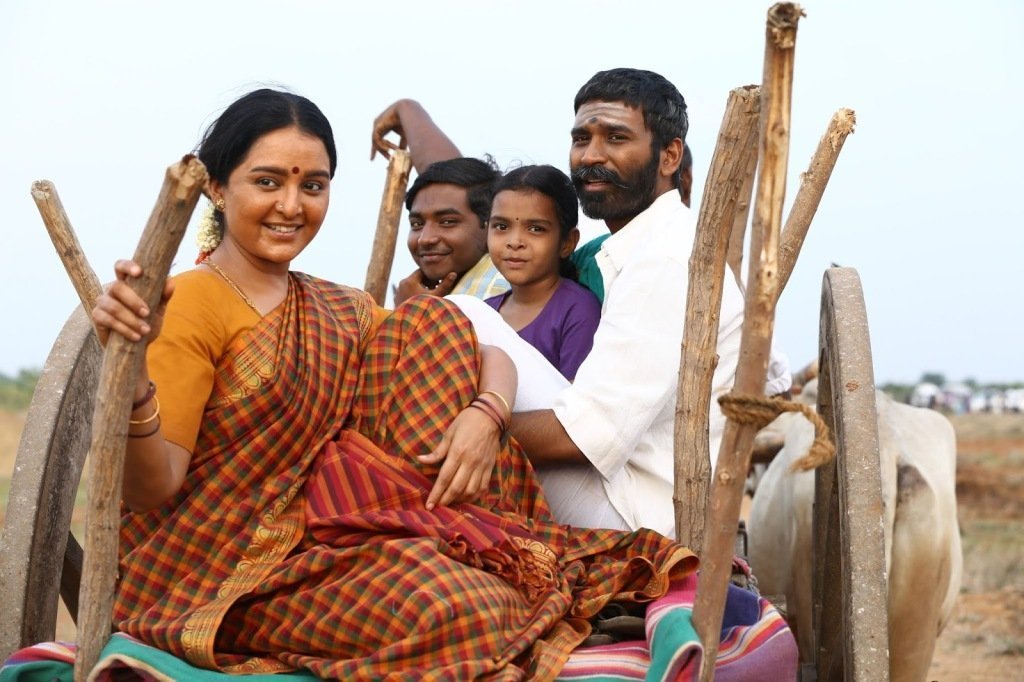 Nevertheless, the film-maker makes up for the flaws in characterization through the sheer disturbing way he stages the murders of Murugan and Sivasamy’s family (in the flashback portion). The violence directed against the narrative’s ‘good characters’ distresses you so much that the ensuing rampage (shot in an astoundingly visceral manner) provides us with a much sought out cathartic experience. May be, if the characters were established in a more organic and profound manner, Vetrimaaran would have created the impact of their loss without relying much on graphic violence. Yet, I’m not complaining about the action sequences, which were superbly choreographed and set to an electrifying score from composer G.V. Prakash.

Vetrimaaran has rightly insisted that those who have read Poomani’s novel wouldn’t be satisfied with the film narrative. Vekkai’s brilliance lies in establishing the father-son relationship, their way of life, their deep connection to the soil, etc. The soul of the novel exists in that distressing yet quietly moving journey of the father-son pair. Eventually, what I love about Vekkai is the lack of overt commentary (social or political). It might be because the novel unfolds from the perspective of a 15-year-old who doesn’t have much understanding of the caste identities. One could say that Tamil cinema hasn’t evolved (both its market and its general audience) to a point to allow a faithful transition of the novel to screenplay; or one could say that this is the best you can do with a novel-based-film, made under a big banner and a star actor. Maybe, it’s mixture of both these things. Furthermore, the necessity to deliver the social commentary doesn’t give a film-maker of Vetrimaaran’s caliber to keep things more nuanced. Hence he writes a flashback which repeats all of the themes that’s already being dealt with in the main story, albeit in a comparatively less cinematic manner (as I mentioned earlier, the wonderfully crafted scene of younger Sivasamy’s ‘asuravadham’ in the vile landowner’s house is the only highlight of the second-half flashback).

Of course, Vetrimaaran’s discernment of the ways the caste and power structures work is something rarely exhibited in Tamil films. He makes a key reference to the Keezhvenmani massacre (of Dec. 1968) in the flashback sequence, also set in the 1960s. The caste bias that runs deeply within people is exemplified in the rise of that educated, soft-spoken stranger who eventually lords over Sivasamy, just because he belongs to the same caste as the landlord. It showcases how caste identity can abruptly render some powerless, and put some others on a pedestal.

Tamil cinema has a long history of stupidly revering panchayat sessions as something of high moral standard. Here, the inherent hypocrisy of such a set-up is unmasked (their version of justice is afflicted by caste-induced myopia). Moreover, it’s not just these age-old feudal system of dispensing ‘justice’ that’s at fault, even the state-machinery dances to the tunes of caste Hindus. Even in death, Murugan and Vadakkuran aren’t the same, and the justice provided to their killings won’t be the same. It’s the deep current of righteous fury combined with powerlessness which turns one into an asuran. But Vetrimaaran (despite fascinatingly filming the bloodletting) assures that a collective rebellion against the solidified caste and power structures are only possible through education.

Also, by Vetrimaaran — Visaranai : A Riveting and Meaningful Cinema

There’s not many faults to find in Vetrimaaran’s direction and cinematographer Velraj’s execution. There are many standout sequences, but I particularly liked the scene when Chidambaram commits the murder (with Sivasamy cleverly helping his son to emerge unscathed). In another memorable scene, the camera smoothly travels into the cramped hut of Sivasamy’s family, taking in their reactions to Chidambaram’s actions while they decide to pack up and leave. The key strength of Asuran, apart from Vetrimaaran’s direction, is undoubtedly Dhanush’s mature, lived-in performance. He particularly excels in the early portions of the narrative as a subservient, heedful father trying to protect his family.

Overall, Asuran (140 minutes) is yet another intense feature by director Vetrimaaran on injustice and betrayal, enacted by venal social and political structures.

Jesus [2019]: 'Japan Cuts' Review - The dilemma of belief through the prism of innocence.