Beats is now streaming on Netflix

Chris Robinson’s Beats starts off on a note of gun-violence. At the time, August Monroe, the protagonist of the film, is shown to be heading home with his sister from one of the quiet streets from Chicago. All of a sudden, a guy comes out of nowhere and fires a bullet. Being unaware of having any kind of presence around them, their survival instincts hardly work at the moment; which leads to his sister getting shot. Losing his sister in such a way leads him towards his further anxiety-ridden journey.

Cut to the present where we see August (Khalil Everage) in his room, listening to beats so loud from his headphones almost to isolate himself. As a result of the aforementioned loss, he has been diagnosed with PTSD which leaves him bedridden. Thus, he loses contact with his friends and has hardly any social interaction. Meanwhile, the film shows another central character of Romelo Reese (Anthony Anderson) who works as a security guard at his school. As we move along, we get to know him to be disoriented while pursuing a career of being a music manager. During his visit at August’s house for school-related reasons, he secretly listens to his beats and gets so impressed that he makes it his mission to take his creative genius to a much better platform. In the process, August’s mother tries to protect her son in every way possible whereas his crush Niyah helps him in his way out of his self-inflicted cage. We see both of their journeys while trying to get over their conflicted past.

One thing that the film surely succeeds in is portraying a PTSD survivor, and how that affects their role in society. It expresses how ‘fear’ can hold a person in a self-created prison and what can set free for someone like him. And the gun-violence which initiates or triggers the character’s condition is definitely a topic that needs to be discussed more. Perhaps for the same reason, the film appears to just skim the surface while trying to make several statements through its narrative. The effort of expressing both of their coming-of-age journeys is admirable yet loosely tied. As a result, it ends up being a largely inconsequential film that relies too much on its emotions and gets weaker with its generic plot. 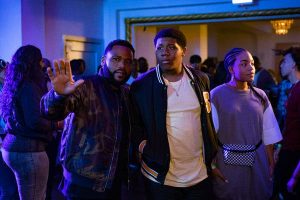 Besides, the film seems to be confused in which one of the topics it wants to discuss and highlights hardly anything substantial. Anthony Anderson’s highly impressive dramatic turn definitely pulls the chords, so does some other performances. But, the desired impact that the makers intended to have, wears thin despite the earnest intentions. That is mostly because of the loose ends tying many aspects that the film puts forward, without being clear of their connection in the first place. The lack of sense of clarity is what mostly drags down its impact.

And it’s sad particularly for the characters that one strongly wants to root for. I can’t stress enough on how important it is to get into the discussion for how an outlet is important to express in the chaotic world around the central character. The film does represent the genre of hip-hop as a mean to do that while being aware and sensible about the process of its creation. But that too is handled just on the surface without the required depth for the subject. Even when I resonate with the characters, there’s very little insight provided for why I am. And this film needed to put that forward rather than sharing what the viewer would already know.

As a result, even if Beats elicits the emotional response once in a while, it sadly remains to be an incoherent and forgettable fare.