Better Call Saul Season 6, Episode 6: Recap & Ending Explained: ‘Better Call Saul’s season six has mostly been on the quieter side. Except for the episode where Nacho dies, there haven’t quite been that many big events. Instead of this lack of instant gratification, we have received a delightful slow-burn of little pieces of story assimilating. Gilligan and co. have gradually and patiently strived to contribute small chunks to different parts of the BCS universe to make the end result a compelling one. Now that Howard and Saul’s showdown is about to happen, we can expect nothing but an explosive end to it. The way episode six ends provides peculiar insights into what is coming next. Right now, the characters are reeling in the impact of uncertainty about their fate.

The atmosphere is a little tense right now with seemingly no respite. All of this can change at a moment’s notice, though, as we have seen before. Episode six, for now, completes the setup that gives a reliable foundation to the upcoming fireworks. Happy reading!

Episode 6 of Better Call Saul Season 6, titled “Axe and Grind”, starts with a strange flashback that doesn’t reveal its meaning at once. A young Kim, sitting in the back room of a local market-chain store, nervously taps her feet. Her mother and the store manager walk in – Kim has been caught stealing a necklace and earrings.

Her mother is low-key proud of her after the manager refrains from pressing charges. We next get a peek into another unprecedented part of the BCS universe – Howard Hamlin’s life. The audience has been quick to take sides and completely disregard him as a character. But as is always the case, he warms up to us, somewhat. His lonely life has all the excesses one could dream of in life. But the comforts come without human touch. His marriage with his aloof wife does not evoke passion. It seems outside his work, Howard’s existence is soulless. 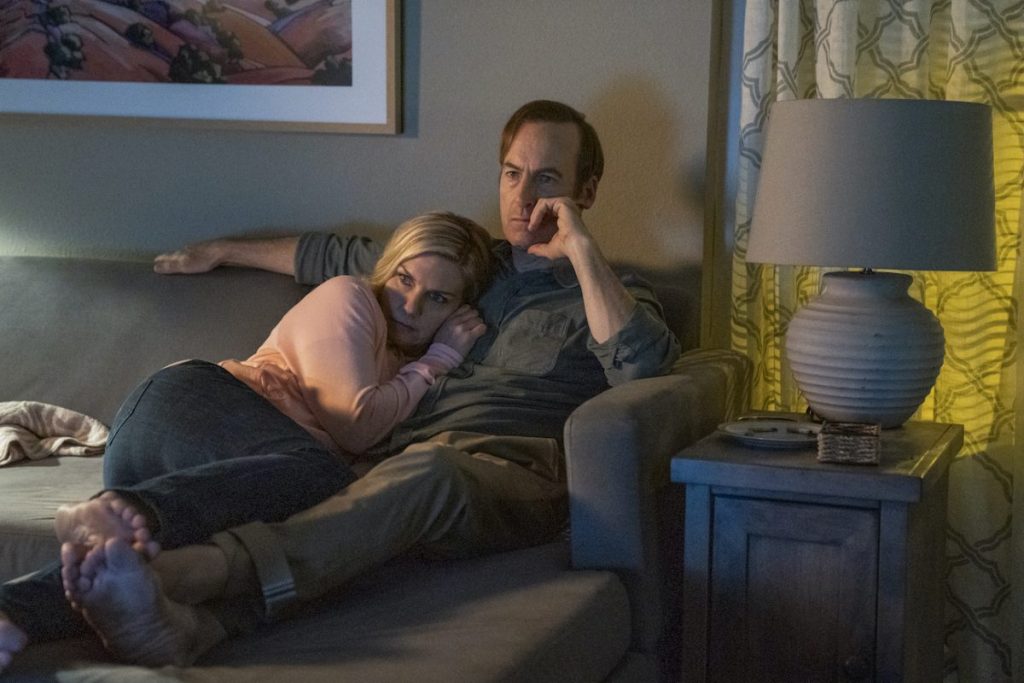 He follows up with the investigator at work. Saul has been seen taking out around twenty grand in cash in the last few days. This rings the alarm bells in Howard’s head. Saul visits the veterinarian – whose side job is to stitch up men on the run – who makes a brief appearance in BCS (after Breaking Bad). Saul supposedly takes an enhancing drug, the purpose of which is hidden from the viewer. The vet tells Kim and him that he is now retiring from this life and his “little black book” – that has all the contacts of men he has helped till now.

Clifford Maine’s assessment of Kim turns out to be right when he sees her in action. Her stout defense for her pro-bono client inspires confidence in him that the Mercer foundation – one of the country’s largest – will come up with a reform program in the State and Kim can be a part of it. She is excited to share the news with Saul at his new office. Saul and Kim’s plan is revealed. The two have hired an actor, a makeup team (from Saul’s shenanigans in season two), and costume accessories. They want to click pictures of Casimiro – rather, someone who looks like him – accepting money to spoil the Sandpiper mediation.

One catch in Kim’s good news is that her presentation for Mercer will happen on the same day as the Casimiro plan. Saul reassures her that her presence won’t be required. The scene shifts to a small house in the woods in Germany. Lalo gives one of Werner’s men a visit. He gets the maker’s address from the sculpture he stole from Margarethe’s house in the previous episode. The man runs and injures Lalo, demanding to know who he is. Lalo tricks the man and pins him down, determined to know about “what Fring is building down there” (referring to the meth lab).

Mike is paid a visit by Victor. He reveals that the “boss” is unhappy with Mike. He feels there aren’t enough men posted at his own house and that a certain Alameda Street has an unnecessarily large amount of men watching it. Mike’s reasons are then revealed in the heart-crushing next scene. He has relocated his family to a house on the Street. He is absent from their lives, for the time being, saying he has work in Chittagong.

On the day of the luncheon and the Casimiro plan, Kim and Saul are brought together, against the plan. Saul purchases the same wine he used to show Kim a scam in season two as a celebratory measure.  To his absolute shock and chagrin, the real Casimiro, whom he runs into in the shop, has actually a cast on his left hand. The photos that Saul framed with the fake Casimiro clearly show his left hand without a cast.  Saul leaves the wine on the counter and phones Kim in a panic and reveals the mess. She is taken aback. Despite Saul’s insistence that she continues on for the luncheon, Kim swirls back towards Albuquerque to execute the plan.

By now, there is so much of a moral difference between what Saul and Kim do, that you almost feel angry at the former for messing up the latter’s plans. Whenever something good happens for her, Saul’s “business” intervenes. Their plan to use the arbitrator’s name and forge a fake conspiracy falls flat on his face. The coincidence is damning and threatens to derail their entire progress. Can they still salvage the plan? Will Kim still get to do the presentation? We’ll see.

“Axe and Grind” maintained BCS’s stellar run this season. There is just one more episode left before the mid-season finale and we can expect some closure on the Casimiro timeline, at least. Whether or not Lalo will get the required evidence and come back to haunt Fring will depend on how quickly the creators can wrap this storyline up. For now, things do not look good for our protagonists. They’re neck-deep in the mess of the plan that they haven’t been able to execute. But the question remains: who will bail them out this time? To find out, wait for another week.