In the opening sequence of Eddie Huang’s directorial debut, Boogie, a montage of the titular character (Taylor Takahashi) playing basketball and strolling the streets of Queens, New York, is shown while Jay Electronica’s Exhibit C blares out. The smooth intercutting between the two sets the stage for what’s to come: a visually enthralling, purely cinematic hip-hop experience, telling the coming-of-age story of Alfred “Boogie” Chin, whose peer pressure from his parents (Pamelyn Chee & Perry Young) to get a scholarship and beat renowned street basketball player Monk (Pop Smoke in his only posthumous film performance), while also balancing his relationship with his girlfriend, Eleanor (Taylour Page), whom he has a tumultuous relationship with. While not all of it comes together as it should, Boogie still succeeds at delivering an engaging story with brilliant performances from its lead actors.

Boogie has a hard time finding its footing for a long time, as it doesn’t entirely know what it wants to be: a coming-of-age family drama or a basketball picture? What does it want to tell on the importance of family and pursuing your dreams? You can tell there is extreme confidence coming from Huang, who seems desperate to tell three different stories simultaneously, without ever knowing where to focus. This is why not everything flows together because Huang’s end goal doesn’t necessarily seem clear to the audience. However, where Boogie fails, it more than makes up for it with its purely expressive and freeing visual style.

Related to Boogie – Something in the Water: A Kinston Basketball Story [2020] Review – Glories of the past, present, and future

Boogie’s main focus is Taylor Takahashi’s central performance as the film’s titular character, and the camera constantly follows him and him only. We see the movie through his eyes, and the camera constantly reminds us of how he observes every meticulous move made by Eleanor or Monk, his basketball rival. Huang is a big fan of the Kuleshov effect, or “pure cinematics,” as Alfred Hitchcock would call it to signify a character trait through visual methods, by assembling three pieces of film (a shot of the character looking; what he sees; his reaction). This creates, according to Hitchcock, the purest cinematic expression possible. In the case of Boogie, there are many instances of purely visual sequences, where everything is told implicitly rather than explicitly. One sequence in particular, where he looks at his enemy [Monk], creates some semblance of conflict and rivalry, without it ever being told directly to the audience. This is what Boogie does for the entire film–he analyzes every move a player makes before he makes his own, which makes for some of the greatest basketball sequences I’ve seen in a long time. 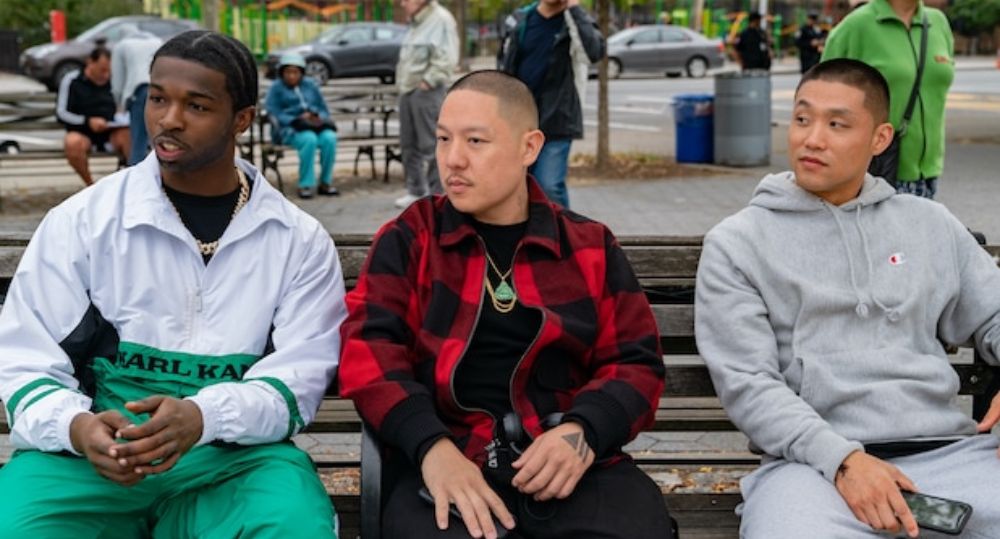 Basketball could be considered the greatest cinematic sport due to its fast-paced and unflinching brutality. Huang perfectly understands how to translate an aggressive game of basketball through purely cinematic methods: rhythmically paced to the incredible music of Adrian Younge and Ali Shaheed Muhammad, juxtaposing insanely smooth editing with a camera that never leaves its main subjects. Basketball then becomes fantastically expressive and is now a battle between two rivals to determine who is the better athlete. The film’s climax presents some palpable tension between Monk and Boogie, featuring some of the best close-calls you’ll see for the tension to become more and more present as the scene strolls along.

Taylor Takahashi commands every sequence he is in with brilliant determination and has fantastic chemistry with his co-stars Taylour Paige, Pop Smoke, Jorge Lendeborg Jr., and Domenick Lombardozzi (in a fun supporting role). However, his most heartbreaking sequences are when he has to confront his controlling parents, who are sending him abroad and using Boogie’s talents as a pawn to get money to pay off their debts. He will not have it and wants to pursue his dreams for him and not fill their parents’ selfishness. It’s particularly heartbreaking to see him being pressured to sign a contract that’ll send him to China after his manager (Mike Moh) presses charges against his father, and the only way they’ll be dropped is if he signed the contract. Pop Smoke’s only film role (as he tragically died in Feburary 2020) is also brilliant, portraying an antagonistic figure with ultra-confidence, a basketball player who never looks at his opponent while playing, but how they move on the floor. Once again, the visual medium does all the work here and complements Monk’s ability on the court for greater cinematic effects.

Nowadays, it feels rare to see a movie that relies solely on visual mechanisms to tell its story brilliantly and succeed at it, even if some of it feels wholly unfocused and not very confident. If you watch Boogie as a visually poetic, 90-minute hip-hop performance, you’ll find great value in it: its musical editing and dynamic cinematography construct the entire movie, while Taylor Takahashi solidifies his portrayal of the film’s titular character as a total star-maker. There’s a lot to enjoy in this vastly underrated and underappreciated picture, showing fantastic promise for Eddie Huang as a serious filmmaker who gives his own reinvention of film as a visual medium. Let’s hope he makes more movies.

Minari [2021] Review - A breathtaking effort on family and resilience