Todd Haynes’ Dark Waters (2019) tells one of the biggest, blood-curdling stories of corporate malfeasance. Through the slightly dramatized tale of a resilient attorney, it exposesthe abysmal depth of a chemical giant’s social and environmental crime, which deliberately poisoned 99 percent of the world for profit. Dark Waters is based on the New York Times article by Nathaniel Rich. It outlined how a mild-mannered corporate defense lawyer, Rob Bilott at Taft Stettinius & Hollister used his years of legal knowledge, working for the big industries, to relentlessly take on an environmental suit in order to hold DuPont accountable for their unprecedented, decades-long dumping of toxic chemicals. The script written by Matthew Michael Carnahan and Mario Correa allows the chain of events that lead to the expose to speak for itself rather than overly embellishing it.

The accidental discovery of polytetrafluoroethylene by American chemist Roy Plunkett in April 1938 might be one of the widely discussed stories in recent times. When the patent was granted and PTFE (polytetrafluoroethylene) was industrially developed during World War II, the chemical had military applications, especially to serve as a corrosion-resistant coating to protect most metals (mainly used in the handling of radio-active materials). When Plunkett’s discovery was eventually declassified after the war, DuPont used the chemical to develop household products. From the early 1960s, the craze for nonstick cookware gripped American households. Furthermore, DuPont came up with a more consumer-friendly name: Teflon. For the large-scale manufacture of Teflon, even from the 1950s DuPont purchased perfluorooctanoic acid (PFOA) aka C8. 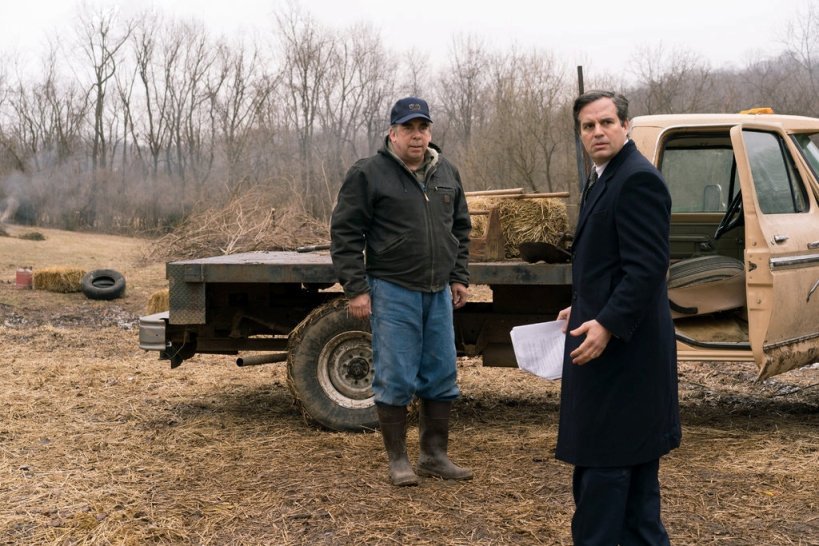 The company raked in at least $1 billion in annual profit just from Teflon products, while it knowingly poisoned the drinking water supply of Parkersburg, West Virginia, where the DuPont plant is situated. Even the chemical giant’s internal documentations clearly show what PFOA exposure did to the plant workers and its hazardous effects on the town residents due to groundwater contamination. More shocking was how the ‘family’ of deadly chemicals (particularly C8) which made its way into the household products, after jumping through the loopholes of regulatory oversight, is found in the blood of 99.7 percent of Americans (according to analysis from the Centers for Disease Control and Prevention [CDC]).

The film opens in 1975 in Parkersburg, West Viriginia. Teenagers jump a fence and go skinny-dipping in the dark waters of Ohio River, only to find themselves being chased out by a boat dispersing chemicals into the water. Cut to 1998, a tenacious farmer from Parkersburg named Wilbur Tennant (Bill Camp) visits a Cincinnati lawyer, Robert Bilott (Mark Ruffalo) with boxes of tapes and documents, entreating the lawyer to file a suit against DuPont for polluting his land and causing the death of his farm animals. Mr. Tennant doesn’t know that Bilott is a corporate defense attorney. He approaches Bilott because he knows the guy’s grandmother. The lawyer is naturally reluctant to take up the case, because he knows there’s no chance a lone farmer can take up a behemoth like Dupont, which can just crush its adversaries through mountains of paperwork and prolonged legal battle.

Yet Mr. Bilott visits his grandmother, and later the Tennant farm. He sees with his own eyes how the deadly landfill, situated next door has polluted the nearby stream and lands. Tennant says he has lost 190 cows. He also has taken pains to dissect his dead cattle and document the organ failures and other deformities. Not only Tennant’s earnestness, but the feeling that there’s more to this story pushes Bilott to take up the case. He convinces his well-meaning chief partner at the law firm, Tom Terp (Tim Robbins) and assures he will limit himself to the Tennant case. Tom is naturally wary of this because they represent corporate companies, though he allows Bilott to proceed.

The lawyer’s resolve and doubts about DuPont’s malpractices only gets stronger when the company shows no intention to cooperate. The normally gentle DuPont CEO, Phil Donnelly (Victor Garber) responds with a ‘Fuck You’ at a crowded dinner gala, when the lawyer persistently questions him about the chemicals To thwart Bilott’s intentions, the company sends hundreds of boxes (withholding all the internal documentations, decades-long report of lab results, etc.) But instead of getting overwhelmed by the data, the dogged Bilott slowly pieces together the truth behind DuPont’s treachery. In the documents, Bilott repeatedly comes across the acronyms PFOA and PFOS, which at the time was not known even to chemists, not working inside DuPont. And when he stumbles upon the truth about the indestructible PFOA (or C8), Bilott learns that the Tennant case is just the tip of a giant iceberg.

Director Todd Haynes ably juxtaposes the human factor very relevant to the case with the legal and scientific technicalities that stretched the battle to nearly two decades. Moreover, by the film’s end it only feels that there’s still lot left to do to hold the suited monsters at DuPont accountable for their crimes against humanity. Anne Hathaway as Rob Bilott’s wife, Sarah has a very limited role (which she aces it effortlessly). Nevertheless, the handling of how Bilott’s professional tenacity took a toll on his marriage is convincingly portrayed without much dramatization. Bill Camp offers a scene-stealing performance as Tennant, a man determined to tell the story of his farm’s ruination despite his deeper distrust for the system. Joe and Darlene Kiger, the lead plaintiffs in the class action suit against DuPont, and Bucky Bailey makes an appearance in the movie (whose lives and battles were portrayed in detail in the 2018 documentary ‘The Devil We Know’).

Todd Haynes, best known for making idiosyncratic character studies (Safe, Carol) and for subtly handling identity politics, has probably made his most generic film to-date. Of course, it doesn’t mean Dark Waters is strictly mediocre, or that there’s nothing interesting in terms of craftsmanship. I felt his direction here was strongly functional although nothing exceptional (even though ‘Carol’ and ‘Wonderstruck’ weren’t written by him like Dark Waters, those films withheld the film-maker’s distinct, tightly coded themes). He hits all the right notes, in terms of presenting the corporate criminality and legal thriller narrative, but nothing distinct enough to upend the rules of the genre. Edward Lachman’s phenomenal cinematography strikingly captures the environmental destruction of Parkersburg and retains a somber mood throughout.

The one good thing worthy to be highlighted in Haynes’ approach to the story is the way he restrained himself in projecting Rob Bilott as a heroic/savior figure. Instead, the chief intention is to tell the world the horrific cover-up of DuPont and the human costs directly linked to its actions. Mark Ruffalo provides firm support with his passionate performance in the lead role(who’s also one of the producers). He admirably and elegantly brings out the inherent drama in the narrative instead of overselling the character. Hence his outbursts and panic attacks come across as organic development, similar to the way he movingly played the journalist role in ‘Spotlight’. Again, it’s not a character study that’s as compelling as usually found in Todd Haynes’ oeuvre, yet it works functionally.

Overall, Dark Waters (126 minutes) concisely tells the story of years of litigation on DuPont’s horrific malpractices through the pivotal viewpoint of a steadfast lawyer. It’s a timely tale for our climate-change era.