Home»Reviews»Films This Week»Bombshell [2019] Review: A largely impersonal take on the personal narratives
Films This Week/Reviews

Jay Roach, who has made his career on several ordinary comedies, diverts his mind to a particularly serious matter. With him, comes the screenwriter Charles Randolph who has the same smugness that worked incredibly well in his collaboration with Adam McKay (The Big Short). With ‘Bombshell’, both of them try genuinely to find a human story amidst the scandalous nature of the real-life fallout of its powerful male entity. Need I say more how the film will possibly turn out?

A topic that has already been churned out many times in the news bulletins, I completely agree with how the female narratives need to be told by a female filmmaker. Not having female creators on a narrative that personally affects them, shapes the way a film looks and gets delivered. We already have Jenifer Fox’s ‘The Tale’ as a prime example of how effective an internalized narrative can be when told from a personal point-of-view. While bringing narratives with predominantly female characters, Todd Haynes has a gentle touch and an overall sophistication. Pedro Almodóvar has also brought female characters a life of their own while treating their arcs with the required respect.

But the creators of Bombshell have their head so transfixed on this idea of a scandal that it directly affects how impactful the film can be. Instead of being a voice of courage or strength, Bombshell remains largely about the horrors of the working environment in the corporate world. There’s no denying that there can be a scathing criticism in the exploration of such winds of fear. The Me Too movement itself started for similar reasons, on the silencing of such voices. While the powerful men kept calling their misconduct acts as a way ‘to working up the ladder’, the much-needed uproar for this movement started rising. 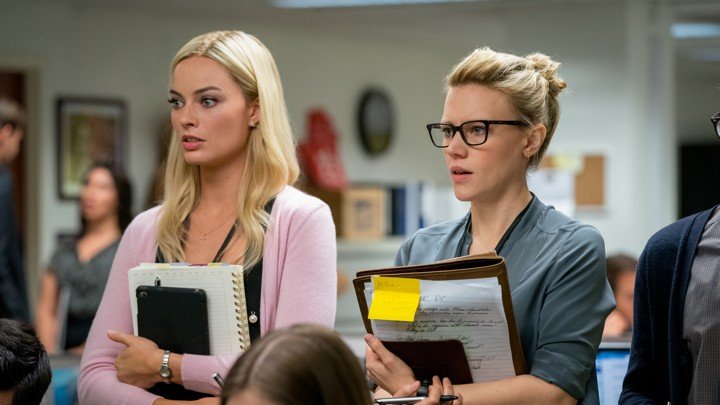 But while making the warriors out of these three ladies (which they rightfully are), the film hardly looks at it from their individual perspective and try to find their human voice (for which the movement actually started).  Instead, it just hovers around their faces with extreme close-ups and relies completely on their powerful performances instead of having a voice, a human voice for these ladies who were denied to speak up. Their story of determination becomes a little too distant to get engaged in their pain and anger.

Not to say any of these performances disappoint. While Nicole Kidman is on her similar level of precision, it is Margot Robbie who often takes the limelight through her role as a bubbly, ambitious girl while swiftly switching from that image to a sense of vulnerability. What aces both of them for me is Charlize Theron’s enigmatic presence that never dulls the significance required for a personality such as Megyn Kelly. She perhaps tries to stitch all of the film’s needlessly expository scenes with an ease that it almost makes you miss these little contrivances.

Also, Read – Polytechnique [2009]: A Ponderous Glimpse into the Layers of Misogyny

And still, the expositions in Bombshell stick out like a sore thumb. Its dialogues are presented mostly in a basic question-answer format that does not leave any possibility of nuance. Not saying that Randolph’s style of humor has to work like that for my convenience, but it feels too on-the-nose when you see a lawyer explaining things like the idea screenwriter has before getting on the first draft. These dialogues appear largely to present the film as something important – as an essential piece of filmmaking. And while the actual issue can never lose its significance, the film keeps going on with a sense of self-importance while having very little to add to the discussion. So, while a certain level of wackiness – like the Billie Eilish track introduces in its trailer- can be admired for the efforts, it just never breaks out to become anything but merely an introductory film on this issue. Its heart hardly aces the comic flavor it desires to bring and the docu-drama remains just occasionally with a much-required soul.