Missing Link (2019) Review: A Spectacular Stop Motion Animation: In their first offering since Kubo and the Two Strings, studio Laika brings to us yet another stop motion animation. Written and directed by Chris Butler, Missing Link (2019) is a film that talks about acceptance. Not of the ones, we know, but the ones who are a little different from us. It presents to us the story of an explorer and adventurer named Sir Lionel Frost. He craves fame and acceptance amongst a certain society and constantly embarks on quests to attain proof of “monsters.”

Lord Pigott-Dunceby (Stephen Fry) who serves as the film’s antagonist challenges him to attain proof of a sasquatch i.e. ‘the missing link.’ If he succeeds he will be offered membership to the club. The scene is so reminiscent of the wager between Phileas Fogg and the members of the Reform Club in 1957’s Academy Award Winning ‘Around the World in 80 days’. What differs is that Fogg isn’t dislikeable nor do the reform club members make any attempt to thwart him.

Sir Lionel Frost is voiced by Hugh Jackman. He successfully manages to shed his usual Australian accent. I only knew that Jackman was part of the film because I read his name in the credits. In the first scene, we see that he doesn’t even hesitate to endanger his valet, Mr. Lint (David Williams). He is dangling onto the end of a rope which is lassoed around a lake monster (presumably the loch-ness monster) and is being tossed all over. At that time Frost is nonchalantly instructing his valet to move within a frame and say “cheese” instead of the “help me” and “my hands are bleeding.”

He maintains his causal nonchalant demeanor throughout. At times it clicks such as in the final act. Now don’t call this a spoiler just because I revealed he makes it to the final act. In another instance in Missing Link (2019), he uses a clever play of words and makes what is supposed to be a joke but actually would make adult audiences give a “Haha” to feign politeness in front of their children who would be wondering where they can use such a line. The production design by Nelson Lowry is commendable in this frame. It has the skeleton of an ape in it which provoked me to join the two and connect the joke to something that is aged and is now a relic.

The sasquatch (Mr. Link) is given the name as both a parody of Frost’s ex-valet and his quest. He is what makes the film enjoyable and draws a chuckle to the audience’s face quite often. Mr. Link is voiced by Zachary Galifianakis in a manner that makes the audience buy into this loveable warm-hearted character’s innocence. You can’t help but smile as he identifies sarcasm and explicitly says so to Sir Lionel Frost. 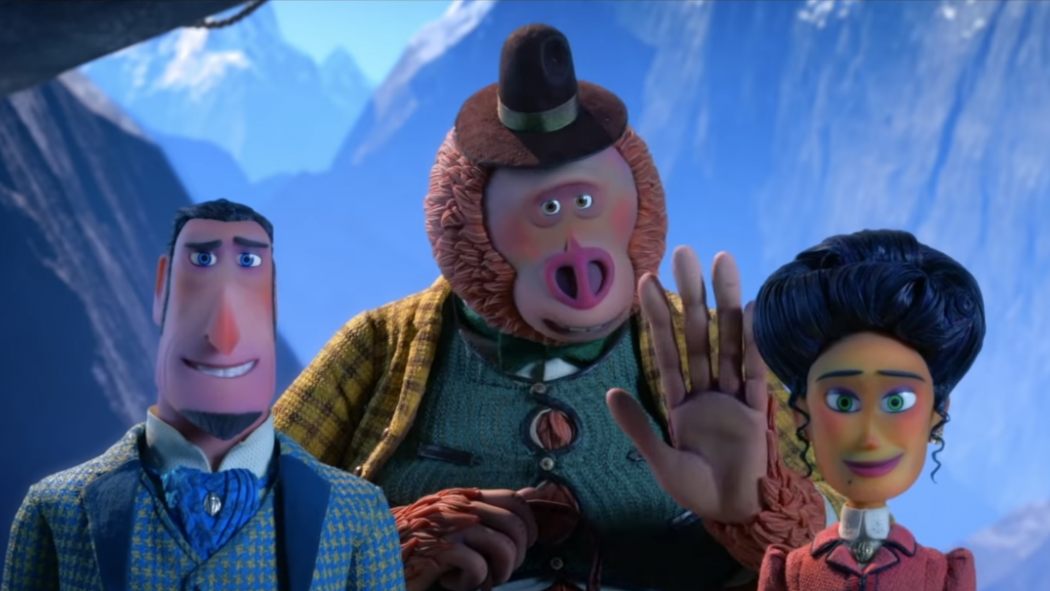 Missing Link (2019) is leisurely paced. Despite it being an adventure film that touches upon scenes from Indiana Jones films (I was reminded of one from Indiana Jones and the Last Crusade) it doesn’t give us an adrenaline rush. The film attempts to normalize the idea of one gender using names that were usually considered as apt for the other gender. Frost solves this by being gentlemanly and addressing that character with the prefix ‘Mr’ thus using his surname. No qualms in this regard by Adeline Fortnight (Zoe Saldanha) who assists Sir Lionel Frost on this adventure across continents.

Missing Link (2019) is spectacular stop motion. However, it doesn’t feel like one as the movements are quite fluid as though it was regular animation. Quite an achievement for Laika and they didn’t stop there. The film sees the lead trio pursued across raging oceans, through dense forests and in high ice-capped mountains overlooking pristine valleys. Just like its previous film the studio has once again constructed elaborate sets and presented us with dazzling visuals.

I loved the fight and chase scene on the transatlantic ship. It is filled with comical fight goofs ups on deck and an “inceptionesque” chase scene below decks with constant shots of the ship from above to give us a context as to why this is happening. Kudos to the Art Department for this. The villain or more so the goon is very cartoony and suffered due to the lack of any sort of backstory. He is presented as a hired gun. But as the film progresses it seems as though he is in it for something personal. What? We don’t know. At least Lord Piggott had a motive for his actions. The lack of backstory would have worked had the henchman not gotten as personal as he did.

Missing Link (2019) works as a light-hearted one time watch. What will set it apart from its competitors in the award swing will be the lack of shoehorned songs right in the middle of the film. It moves fast and has a crisp 95 minutes runtime which won’t lead to complaints that it was too short or should have been longer. Shame that the writing wasn’t just a notch higher that would help us remember this film. But that didn’t seem to deter the Hollywood Foreign Press Association right?