Shawn Ruddy is one of the more infamous live streamers on Liviid, a Twitch analog. He hosts a show called Wrath of Shawn, which would force the host to face his fears, or at least whatever fears would entail him pulling off an epic prank to gain internet infamy. This consists of calling the police names, sledding down icy slopes naked, etc., and more serious issues like exploiting the Mexico border crisis by being smuggled through. Deadstream was shot using point-of-view cameras, overlays that resembled Zoom, Skype, or other video applications, and, of course, Liviid, the social media platform where Shawn would interact with his fans as he planned another epic prank.

He would spend the night in a haunted house in the woodlands of Utah, the house belonging to Mildred Pierce, a lovesick poet. And we knew exactly what would happen because horror movie conventions have become second nature to the viewers. We know that Sean is going to royally make things miserable for himself, and we, as horror fans, will lap up every second of it. At least, that is the hope that any horror fan has when he begins to watch a horror film.

Thankfully, directors, Joseph and Vanessa Winter do not disappoint us in this horror-comedy. The movie does take a while to set itself up, as the walking and talking nature of the screenplay finds Shawn with his obnoxious nature revealing story elements, important plot points, and backstories while setting up cameras throughout the house. The set-up does tend to drag a bit, but what works is Shawn’s arrogance, bordering on distasteful levels of privilege. The screenplay cleverly sets you up to be perpetually annoyed by Shawn as well as simultaneously laughing at his observations and referencing horror movie tropes while he is interacting with his fanbase. The reactions of the fanbase are also as expected and draw a handful of chuckles. They are either completely behind him or simultaneously goading him on, even as creepier elements start to burrow their heads in.

The movie ratchets itself up a notch when the inciting incident finally begins, almost a half-hour in. But credit to the directors: once it sets in, the movie evolves into a breathless thrill ride. It helps that the reliance on practical effects and makeup in the design of the monsters, as well as the creepier elements of the haunted house, gives them an overall lived-in sense of location. Couple that with the use of go-pro cams to replicate the sense of watching a YouTube live stream, and the audience is already drawn into the storytelling because of the pseudo-interactive nature of the story. 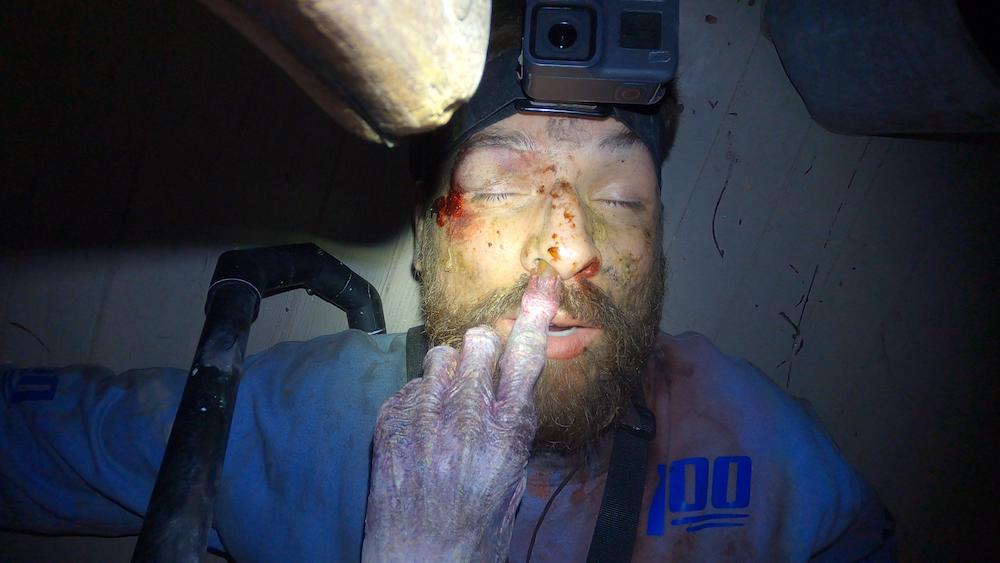 The Webcast cameras give the manor a vastness that is necessary to signify the horror of the haunted house. There are moments where the horror elements don’t work. A prime example would be Shawn hiding in a closet and hearing a sound below him, removing the blanket covering his knees to see Mildred’s head between his legs and her biting his nether regions. While it is still a gory image, it only forced me to chuckle instead of wince in pain. On the other hand, there are moments where the horror elements mix seamlessly with the tongue-in-cheek humor or the gross-out humor, like Sean shooting a monster with a tater gun, blowing a hole through his chest, and the body sliding downwards through the barrel towards Shawn as he screams in horror.

But then there are moments of reference and tongue-in-cheek humor that sometimes land with a thud. The comparison of the 18th-century poet Mildred Pierce with a live-streamer like Shawn, due to their propensity for attention, would draw baffled chuckles from the audience, but also highlight the inherent narcissism in the protagonist himself. It is evident from Shawn letting go of mind control by the evil spirits by exclaiming, “I am the influencer here.” Expecting consistent levels of horror is not the point, but enjoying the throwback nature of the 80s horror and creature feature vibe and supplanting an obnoxious narcissistic man-baby influencer in the middle of this carnage to fend for himself is going to elicit derisive and genuine delight from the audience, or in the case of the world within the movie, fans reacting with disbelief, horror, and even laughter.

It all works within this low-budget thriller because of the expertise of the director duo and the makeup and creature effects, as well as creative blocking and the use of grainy camera footage in certain segments. It manages to sidestep some of the usual flaws of such movies, but especially the glaring ones in this regard. Characters would enter Sean’s Livestream and deliver important information via video messages that would disrupt the flow of the scenes at key moments. However, there was one instance where the director undercut this disadvantage to elicit a comedic reaction. And it is for this reason that Deadstream is destined to be, if not a future classic, then at least a film with vibes comparable to Evil Dead. It is gory, gleeful, humorous, unapologetic, and goofy.

I mean, the house burped blood in the end. What else is there to say after that? Just watch it once it’s out.

DEADSTREAM WAS SCREENED AT THE 2022 SXSW