I think I got the Russian doll right.

Even if I haven’t, I don’t think the movie has it down either.

Fucking with Nobody, directed by and starring Hannaleena Hauru, starts off as something relatively tame. After losing out on directing a feminist horror movie to her male colleague Kristian (who also happens to be her ex-boyfriend and is currently in a relationship with the screenwriter of this film Shirley), Hanna tries to drown her sorrows at a party with a bunch of her friends. She complains about her current predicament and laughs about Shirley and Kristian’s staged for Instagram romantic pictures.

It’s at this moment when Hanna’s two friends Viima and Maria, decide to create a sort of immersive and subversive project where Hanna and Ekku (one of their actor friends at the party present) would pretend to be a new couple in love on Instagram. This project, Viima, and Irma surmise, would upend the traditional gender stereotypes and hierarchies while also calling to attention the fakery and manipulation of social media.

Related to Fucking with Nobody – [Not a Review] Deadpool [2016]: Wade Wilson & His Maximum Effort

Imagine their surprise when people actually buy into the project, and people start behaving with Hanna in a far nicer fashion, Ekku also gets much-needed exposure in his acting career. However, as the movie progresses, we start seeing the making of this exact movie, and the conflict starts when the protagonists begin to step out of their characters. Or, more accurately, they forget to, and the lines between reality and fiction begin to get blurred. As the overall movie begins to take shape, cracks start to form in both the reel and the real, and Ekku and Hanna might be falling in love for real, much to the chagrin of both of their partners. 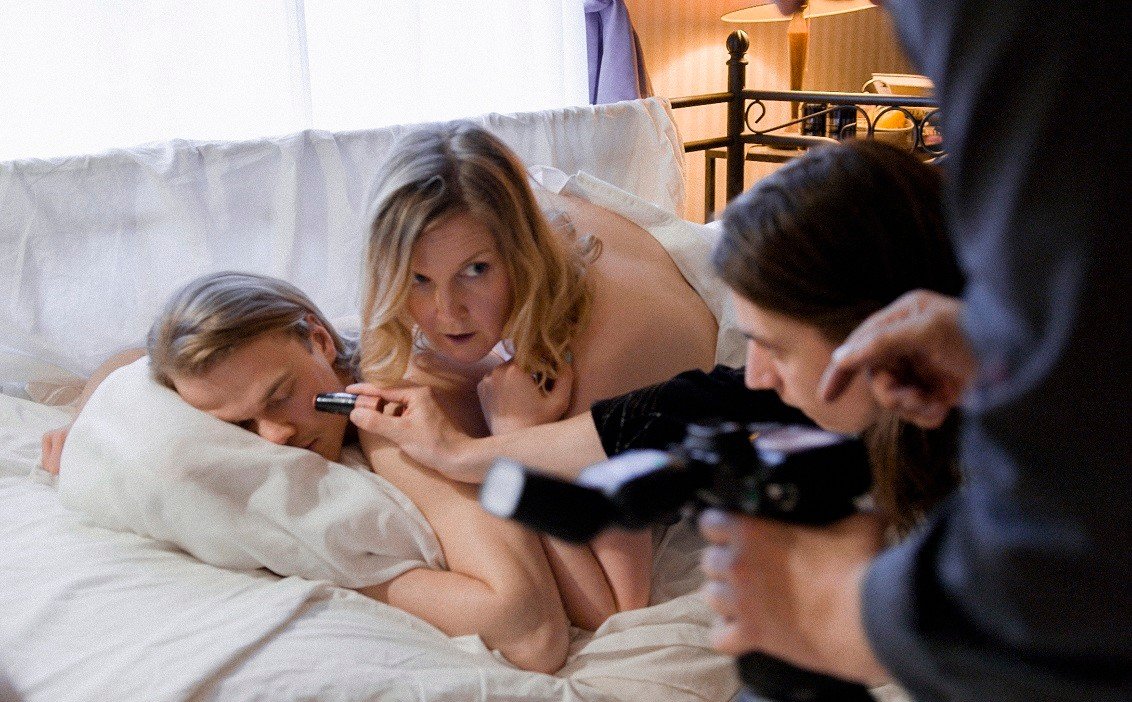 Fucking with Nobody works exceedingly well when it makes fun of the entire movie and entertainment industry as a whole. Especially in regards to feminism, the generally progressive attitude as well as the political correctness and the “walking in eggshells’ with regards to any types of social policies. The parodying of such progressiveness which slowly gets revealed as more hollow and mutating into pretentious drivel is equally interesting. Yet, the third act becomes disappointing and somewhat inevitable.

The primary reason for it being disappointing is because Fucking with Nobody as a film takes the premise and gets lost in its own pretentiousness. The reel and the real walls blurring, Hanna’s own character becoming more and more desensitized as time goes on, all of the characters revealing themselves to be hollow underneath, in pursuit of the fleeting and fast earning stardom – these are plot threads which feel familiar, and the movie tries hard to be far too clever than it actually is.

From a technical standpoint, Fucking with Nobody tries hard to change the visual character of the film – Instagram filters, emojis filling the screen, drone shots, super 8 camera, staged photographs with filters added on them – this makes for a disorienting and fast-paced experience. For such a tame and yet complex premise, the comedy setup is also quite broad. The fantasy scene at the nightclub with excreta falling, the nipple piercing, other moments of excreta and vomit just show that the film is trying every trick in the bag to be tongue in cheek. This leads to a tone variation with the speed of an arrhythmia. And yet it also tries to be emotional, but as a viewer, even I got tired at the vapidity of most of these characters.

Also, Read – FILMMAKERS NEED TO LEARN LYNCH AND SHUT THE FUCK UP

Fucking with Nobody is a movie dripping with irony. Contrary to its name, it fucks with everyone – the characters, the story, and especially the viewers. But, after a point, the movie becomes so pretentious that it starts reeking of self-aggrandizement. Metatextually speaking that might be the whole point, and credit to Hauru and co-writer Poser that at the end even the characters admit that the movie they are making does not work. A way out from criticism, maybe? Maybe. A method to show how smart it is? Maybe.

But by that point, even at a runtime of 104 minutes, one gets tired of the layers upon layer upon layers. Irony can only work if you don’t want your film to be taken too seriously. But the subtlety applied at times to show the emotional repercussions of said manipulations suggest that you do want your movie to be taken seriously. This tug of war ultimately ends in an unsatisfying experience.

Fucking with Nobody is now streaming on MUBI

Fucking With Nobody Links – IMDb