Childhood memories poured into my mind as scenes from Nandita Roy and Shiboprasad Mukherjee’s Gotro (2019) preached brotherhood and humanity.

Six year old me was taught that it was okay to have food from Ria’s tiffin box but I was never, never supposed to even touch Hussain’s lunch. I didn’t know what religion, caste or ethnicity meant. To me, Hussain wasn’t any different from my other friends and so I never obeyed what I was taught. The noodles in his tiffin box were hard to resist. These childhood memories poured into my mind as scenes from Nandita Roy and Shiboprasad Mukherjee’s ‘Gotro’ preached brotherhood and humanity.

Mukti Debi, a septuagenarian lives in her ancestral home, Gobinda Dham in Kolkata. Her son Anirban and his family live in Houston and the film opens with him requesting his mother to move to Houston. However, Mukti Debi is very attached to her house and refuses to leave the place where her thakur, God Krishna resides. Mukti Debi is a woman with strong principles and strict rules.

She is a krishna bhakt, a staunch vegetarian and expects the people in the house – a young girl, Jhumu who helps her with cooking and grocery and the priest, to obey her. Hence, when Anirban appoints a caretaker for her, he ensures that he is introduced to her as Tarak Guha, a Hindu rather than Tariq Ali, a Muslim man who he really is.

The film is a tale of the relationship that Mashi Ma(Mukti Debi) and Tariq share. Their bond is one of warmth and keeps growing stronger until the day when Mashi Ma sees Tariq reading Namaz in his room.

With light hearted and funny dialogues, the film makes you fall in love with Mashi Ma. Anashua Majumdar is spot on with every detail of her character. The film progresses with a perfect blend of entertainment and poignancy. 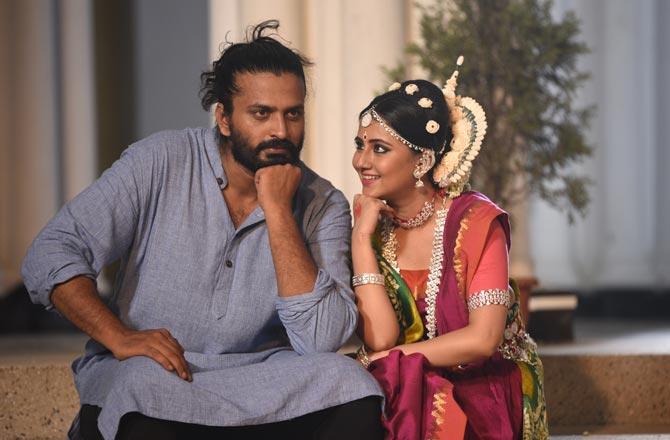 It drenches the audience in the message of humanity being above all religions. Love, faith, non-violence and peace are other messages the filmmakers have conveyed through well-written dialogues. From real life instances of religious tolerance to using King Ashoka as an exemplary, the film does its best in attempting to change the hearts of those who believe in religious stereotypes. The need to take care of the elderly, the importance of selfless love and care and the meaning of responsibility and duty reflect as subtle pleas of the filmmakers.

Each time something heart wrenching happens in a scene, the film ensures that it is followed by funny antics of the silly brahmin priest or some weird dialogue by the always cheerful and jumpy Jhumu. It doesn’t let you stay with one emotion for long. You take a dip into curiosity and then it lifts you for you to take a dip in the pool of light humour.

The background music and the songs in the film beautifully compliment the narrative. Babul Supriyo, Shreya Ghoshal and Arijit Singh weave the magic with their voices.

Nigel Akkara (Tariq) who most of time remains the man with the stern looks and soft heart, in the very end finds homes in calling Mukti Debi his Ma, mother. The climax comes with its message of humanity and humaneness being the ‘Gotra’ of us all, in a tender and heart warming way.

Shiboprasad Mukherjee and Nandita Roy like always have touched upon human emotions with great intricacy. In each, Praktan, Posto, Hami and several others, the duo have plead the audience to be more caring, to be more understanding and in this one, to let all Hussains and Rias and everyone else to eat together.