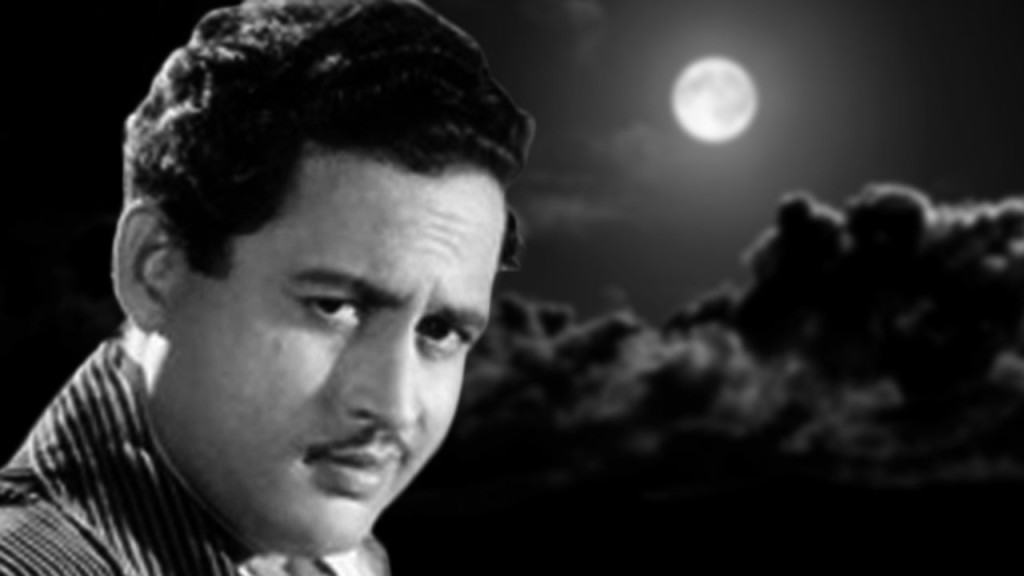 A spurned lover lets loose a poignant evocation of his tryst with unrequited love in the house of a well-known publisher Mr. Ghosh (Rehman), upon seeing the latter’s wife Meena (Mala Sinha) who once meant the world to him. Decrying the demise of integrity in true love when struck by the dreariness of materialism, he confronts the existential vacuum of regret and rejection. His voice is sombre when he ardently declares – “Jaane who kaise log the jinke pyaar ko pyaar mila” (I wonder who those people are who receive the love they truly seek). The cognoscenti listens and absorbs – beguiled and perplexed – but is eerily muted in response. The esteemed gathering is shaken and aghast at encountering palpable flashes of raw truth, revealing the hollow delusions it has latched onto. There is fleeting acknowledgement, but it is soon muffled in the deafening silence of apathy and self-absorption. Vijay, in a saturnine trance, continues to bare his soul in a profound, lyrical presentation of his poetry, unmindful of public acceptance.

The singular scene is from Pyaasa (Thirst) (1957), Guru Dutt’s poetically surreal masterpiece in which he plays the passionate, vagrant poet Vijay. It is a multi-layered accomplishment teeming with religious, political, social and patriotic themes. They are inseparably tangled in a decadent urban milieu lurking beneath the lustre of post-Independence optimism. The film, unwavering in its conviction, culminates in the rejection of fame as an artifice invented by a flawed society which abysmally fails to recognize its true artists. Formerly written as Kashmakash (Conflict) during the tough days of actual struggle, it was drafted many times and altered throughout the course of the film’s production. Dutt teamed up with the poet Sahir Ludhianvi to get the right lyrics, using many of his former literary pieces as references to create Vijay’s character and the tumultuous world around him. VK Murthy, his frequent collaborator, lent visual flair to the subject while SD Burman composed the songs and background score. With a perceptive amalgamation of lighting, close-ups, music and symbolic imagery, Dutt forged a unique, endearing aesthetic to reflect his rumination on Romanticism. 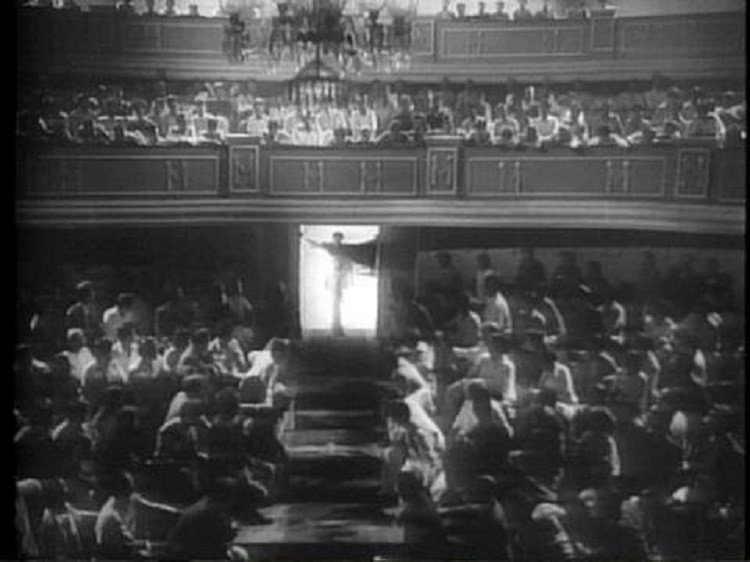 Concerned with the erosion of humanity and truth in an uncaring, deceptive world, the Romantic poet eschews the role of an apologist and takes injustice head on. He has a singular weapon in his hand – ability to wield the pen. When he encounters another self-effacing individual ostracized in daylight yet amorously desired as darkness engulfs the homeless on the streets, he construes the woman as a fragmentary embodiment of his own struggle in the search for enduring authenticity. In Pyaasa, Vijay perceives Gulabo (Waheeda Rehman) not as a vicarious object of pleasure but an unblemished and poignant reflection of his own self. Gulabo begins to bracket the intricacies of Vijay’s poetry with the arduous quest for her own meaning, even though she initially uses his writing to importune herself. When she discovers that the penniless pursuer she turned away was none other than her cherished poet, she decides to make amends by empathizing with his inner crisis.

Driven out of his own house by the asperities of disowning brothers, Vijay is deep in despair and penury. Guru Dutt makes evident his initial preoccupation with a nihilist theme central to almost all his films post Pyaasa – annihilation of the self. Guru Dutt understands this theme as being an ambivalent emotion, almost nascent in a mercurial yet perceptive protagonist. Vijay drowns his misery and failure in alcohol, aimlessly mingling in unscrupulous dens of vice – places where even the most ardent chauvinist is a slave of amorous desire. Even here, Vijay cannot detach himself from his inherent cognizance. His gift of creativity is now a curse as he embroils himself in the ghastly dystopia of a red light district. His observations are more than words of description, questioning the very idea of patriotism and dignified morality – both vanish when bruised souls cower in young, hapless bodies peddled as property. The wailing of a hungry infant is also muffled so that a dance performance by the infant’s mother may continue unhindered. Vijay can bear no more and he unleashes his own conscience upon the insidious inhumanity around him.

Abdul Sattar (Johnny Lever), a nonchalant, quirky and peculiarly forthcoming masseur acts as a foil for Vijay’s more brooding stature. Their light exchanges are simmering with age-old conflicts of ways to live life – pine for truth and beauty at the cost of sinking in the ocean or just keep on sailing gleefully till you reach land. Sattar advocates the latter with zest as he struts around touting the virtues of his trade, in a poem written again by Vijay. Abdul Sattar’s character is not mere happenstance but represents the other side of the coin – not the counterfeit handed to Vijay but the currency which keeps both Sattar’s visceral joy and Vijay’s cerebral anguish going. Sattar also proves to be of immeasurable help when he engineers Vijay’s escape from a ghastly prison meant for the mentally ill. On seeing the quagmire and shock of blind madness, Vijay decides to be iron-willed in his desire to unmask the ailing face of society. Rejecting Sattar’s cheeky call for buoyancy, he is emboldened to carry on his arduous quest alone. 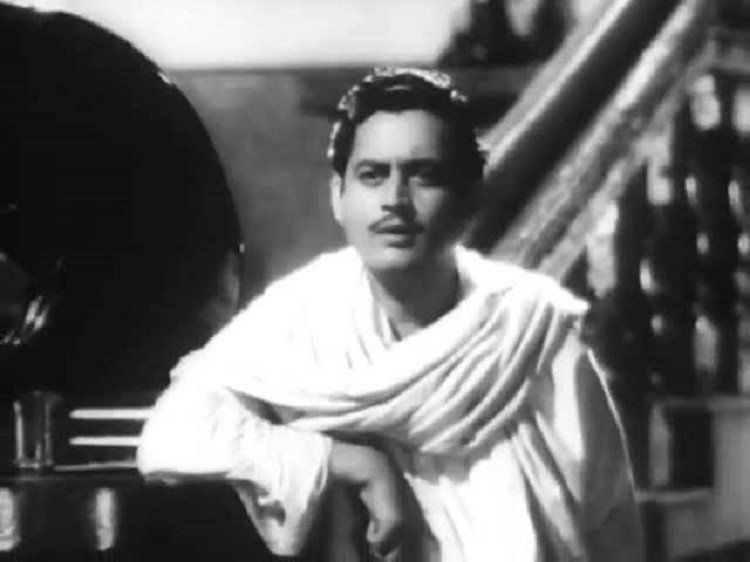 As the ultimate betrayal of his own kin and those around wound him, Vijay rejects the world and all that comes with it in a climactic sequence strikingly reminiscent of crucifixion. The usage of lighting, long shots and space as distinct structural elements, rhythmically ensconced in evocative music connote shades of the surreal. “Ye duniya agar mil bhi jaye toh kya hai” (Even if the world hails me and my work, I will reject it) – a point-blank refusal to blind oneself with illusions of a merciless, hypocritical people, forms the pivot of the film. At this juncture of the narrative, Dutt embraces the core of Romanticism and also uses melodrama with flair, underscoring crucial emotions dictating essential character graphs. He reveals his artful sensibilities with aplomb, for the audience within and without. The audience in the film however, is unable to forego the intangible fetters their poet mightily rejects and is prone to impulse, soon descending into a raucous, chaotic state. The erstwhile patrons of literature are now an unruly mob in the clutches of delirium when their beliefs are attacked. Gulabo is the only member who has finally redeemed herself as she beholds Vijay’s poise. Her tears betray a freedom she has seldom felt before. As Vijay decides to severe his tether to materialism, he seeks out Gulabo – the only woman who can be his anchor, a soul longing to give life meaning. They proceed hand in hand, walking towards the setting Sun.

It would be years before Pyaasa would be resurrected from the annals of Hindi cinema, finally freed of its alleged mainstream character and exalted to the pedestal of a classic. Its creator’s unfortunate demise had already taken place by then, leaving behind an everlasting thirst for self-expression and an unwavering love for filmmaking. His command over the language of cinema has been consistently praised ever since and his deep understanding of human emotion is cathartic to the discerning viewer. Pyaasa remains etched in the memory of all those who have experienced its sheer beauty – not lush, ornate scenery but a fearless, humble poet wafting through urban shadows, transcending space and time.

A final year computer engineering student from Mumbai who loves cinema which stimulates the contemplative mind and lifts one up from daily humdrum. Though all genres are equally engaging, I am drawn more to horror and the surreal, peppered with a tinge of old-school romance. The late 50s is where I belong.