Tom and Jerry is a live-action film that may leave you scratching your heads and wondering about the stupidity of everything around you. At times, you may even question whether the film has been aptly named. Like could The Dark Knight have been called ‘The Transformation of Harvey Dent’ instead?

I felt like this film could have been titled ‘The Adventures of Kayla ft. Mot..oops Tom and Jerry. Let’s go ahead with what director Tim Story called it.

The ‘live-action’ Tom and Jerry film features the much-loved protagonists as they strive to survive in ‘The Big Apple’ New York City. Initially, the positioning of the characters makes older audiences scratch their heads as to why they hate each other with such passion. It’s not as though they were living in the same house as they did in a plethora of animated shorts.

Jerry, Tom, and Kayla (Chloe Grace Moretz) all reach the same hotel and get caught up in the adventures surrounding a huge wedding on the premises. Kayla is supposed to be the driving force of the film, but she comes across as uninteresting and cannot save this mess.

She plays a clever girl who does whatever she needs to, to get her way. This character still doesn’t lead many to comprehend how a hotel would hire a cat over a pest control to sort out a mouse problem. Surely the sight of a cat sauntering along the halls would present an issue? We get to see Kayla fall on her feet and not stumble. We see her friendships with the hotel people. This is why I wonder if the film has been aptly named. It’s more about her rather than Tom and Jerry.

Similar to Tom and Jerry: 4 Great Animation Shows To Watch On Netflix

But then, in a way, it is a Tom and Jerry film, because we get the cacophony of noise and a collection of unimaginative plots. Unfortunately, we also get a very misconstrued representation of the Orient. It’s sad that they had to resort to that. Whilst the shenanigans such as the chases and the animal tornado are staples of the animated shorts, Christopher Lennertz’s music isn’t quite something that can make up for Scott Bradley’s score. Furthermore, the rap scenes are absolutely uninspiring, and when I look back that’s where it all began. Cringe. This should have been either a live-action film or an animated venture.

The trend of live-action films based on cartoon characters has certainly taken flight. It’s not a bizarre notion to see what used to be our daily dose of animated features be part of a feature film. Whilst some of them are entirely live-action like the Scooby-Doo franchise or the Lion King and Jungle Book’s CGI, at times the blend between animation and reality seems a bit too preposterous to digest. Like how could every animal in the feature film be a cartoon? Yes, this includes the fish at the marketplace as well. 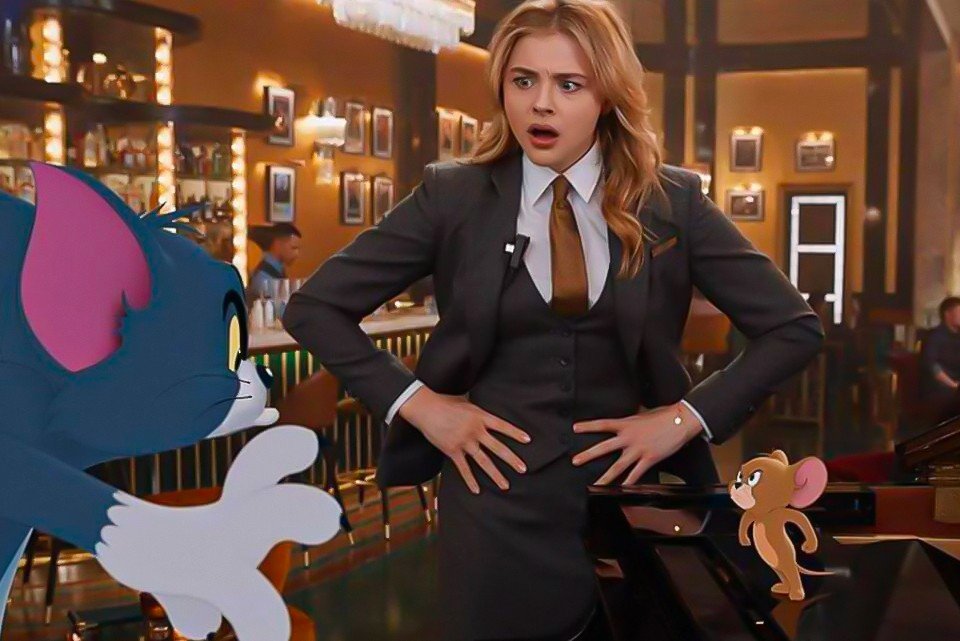 That’s how childish the new Tom and Jerry film is and one can just imagine how the target audience i.e. the children (who are getting smarter by the day) would digest such a tale presented to them. The parents accompanying them would be stunned at the butchering of their childhood.

Yes, the first reaction of any adult who grew up watching William Hanna and Joseph Barbara’s creations prance around on-screen would be to go back, get a hold of those delightful shows and binge-watch them. A child would watch this, and perhaps the characters may be redeemed in their eyes.

For praise’s sake, one can see nods to certain classic Tom and Jerry episodes such as ‘The Cat Concerto’, ‘Jerry and The Goldfish’, ‘The Flying Cat’, ‘Designs on Jerry’, and many more. The presence of supporting characters too is a nod that could present optimistic cinemagoers with something positive to look at. Although such a thing is akin to searching for needles in a haystack.

As the film progresses, adults would realize that the nostalgia wears off. Despite seeing some of the best characters from the animated show, it is tedious to watch cartoon humor make its way into the real world. How can such incidents take place with no serious injuries? Kevin Costello, what were you up to whilst writing this and imagining it as a live-action film?

Similar Read to Tom and Jerry: Wolfwalkers (2021): Unleashing The Wild Side

Yes, let’s agree that these types of films are made for the kids, but the kids too may not be able to digest this mess. A better plotline would have been along the lines of the ‘Fat Albert’ films where the toons break out of the animated world. It sure beats the preposterous logic of every animal being a cartoon.

Unimaginative, unfunny, and poker face-inducing, Tom and Jerry’s crowning achievement could be its ability to draw people back to the original and beloved cartoon. Or perhaps the original Tom and Jerry: The Movie, which in itself is quite forgettable, but works as it was a purely animated effort.

The Best Gambling Movies Ever Made