Finnish filmmaker Juka-Pekka Valkeappa’s fourth directorial venture focuses on not-so-likeable underdogs trying to hit big and change their bleak fate. Perhaps JP Valkeappa is drawn to such characters inhabiting the margins, socially or psychologically. His previous film Dogs Don’t Wear Pants (2019) was about a grief-ridden family man named Juha encountering a BDSM scene. Juha’s bizarre relationship with pain and pleasure becomes the crux of this intense drama. In Hit Big (aka Hetki Iyo, 2022), one of the central characters, Marjaleena (Outi Maenpaa) has been partying for a long time. In the 1980s, she was Miss Finland runner-up (aka 2nd Princess). Presently, she’s like an impoverished Norma Desmond-like figure, clinging to the identity of the past and shuffling through each day in a drunken haze. The intertwining threads of pain and pleasure could be perceived in Marjaleena’s characterization.

However, on the outset, Hit Big is a crime-caper comedy which follows certain genre conventions and breaks a few. The narrative is set in the sunny Spanish coastal town of Costa del Sol. Marjaleena runs and lives in the bar called Bella. Mikko (Ilkka Heiskanen) is her loyal companion. He is an old, gaunt, and exuberant drunk who seems to have hailed from Emir Kusturica movie world. Vili (Johannes Holopainen) is Marjaleena’s half-witted grown-up son. He smokes hashish and remains curious about his imprisoned safe-cracker dad, Worm (Juka-Pekka Palo).

Dust, dirt, sweat and cheap alcohol define the interior of Bella. Empty bottles are scattered everywhere. The furniture is shabby, and the dress Marjaleena wore to the Miss Finland pageant is framed and hung on the sloppy wall. The trio has run out of money and the Albanian mafia is threatening to take over. Soon, Marjaleena receives news about her ex-husband’s release through his Finnish lawyer, Jormanainen. The lawyer informs Worm’s decision to evict them and promises a monthly allowance for Marjaleena. 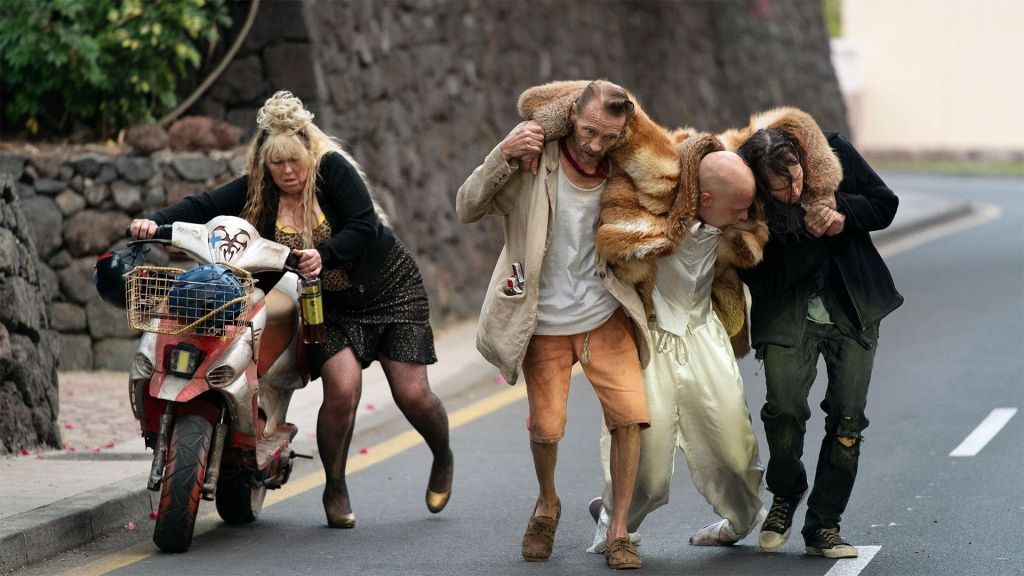 Hit Big’s enraged trio is forcibly relocated to a run-down apartment complex. However, Mikko discovers Worm’s secret. Worm’s loot has been hidden in plain sight at the bar for nearly two decades. The money is delivered to Worm’s new mansion in a van. Naturally, the ever-inebriated Mikko and Marjaleena want to use the bag of money to change their lives and identities. Their plan is simple but hilariously flawed. The three break into the house in order to obtain the money in the garage. But they only find Worm’s new spouse Ninja (Paaru Oja), a trans-woman who got acquainted with Worm in the prison.

Mikko devises a kidnap and ransom scheme after failing to locate information about the garage door code. They take Ninja to their hideout and request ransom money from the lawyer. Mikko devises an ingenious plan to steal the money without being discovered by the lawyer’s thugs. Unfortunately, the underdogs make a minor error that results in bloodshed. Things only get nasty from there as Marjaleena not only wants the money, but also seeks revenge on her abusive ex-husband.

Just as how Dogs Don’t Wear Pants wasn’t entirely about sex despite focusing on sexual fetishism, Hit Big isn’t actually about alcoholism, although booze is the driving force of these flawed characters. The film is more about forging new identities, chasing hopes and dreams even though it all ends up being a mirage.  JP Valkeappa, the writer/director, appears to stumble a little in finding the right balance between genre pleasures and thematic exploration. The structure of the narrative keeps morphing to include new themes and strange encounters that Valkeappa misses out on emotional beats.

The kidnapped Ninja poses a valid question to Marjaleena about rigid gender identity. They both come close to understanding each others’ suffering. Moreover, solidarity of sorts is forged when Ninja and Marjaleena plan to go against their vicious spouse. But the goals of the narrative and the characters keeps changing that it feels tonally uneven. Of course, the characters’ marginal status keeps them in a volatile state. Nevertheless, Hit Big juggles between different character arcs and none of them seems to leave lasting impact on us in the later-half. Vili’s coming-of-age, Marjaleena’s salvation, and Ninja’s doomed fate are teased out in the narrative proceedings. Unfortunately, the inconsistent writing gradually chipped away my emotional investment on these characters.

If there’s one character in Hit Big whom I loved and looked pretty well-rounded, then it was Ilkka Heiskanen’s Mikko. To their credit, both Heiskanen and Maenpaa never allow their respective character’s drunkenness to reduce them into a caricature. Mikko is especially endearing, with his silly antics accompanied by an earnest, hangdog expression. The quirky humor of the character is sorely missed in the film’s final act. Perhaps, one of the most interesting aspects of Hit Big is when Vili realizes how Mikko has been more of a father to him than his real dad. The Jesus-obsessed car mechanic and music-loving Albanian thug add a nice flavor to the narrative.

Finnish cinema often brings to mind the minimalism, visual poetics, and deadpan humor of Aki Kaurismaki. But like Teemu Nikki’s Euthanizer (2017), Hit Big is intriguingly disgusting and unpleasant. In fact, the film contains a hilarious scene in which a Spanish taxi driver regurgitates positive stereotypes about Scandinavia after encountering these goofy misfits. Hit Big (123 minutes), like all dark comedies, ends on a sad note. Vili most likely got what he wished for. Alas, his vacant expression in the final frame bothers us.