Joint [2021] Review: The concept of a yakuza in Japan has existed since the 17th century. A Yakuza, for the uninitiated, is a syndicate for organized crime in Japan. They are more or less different from the famous Sicilian Mafias or the American gangsters. However, they typically share their tendencies when it comes to spilling each other’s blood. Other than the familiar Asian physical features, a Yakuza mobster is identified by his heavily suited appearance and well-bred code of conduct, earning them the reputation of being one of the wealthiest and most refined crime communities of the world.

Japanese cinema has always had a knack for blending their mystic visual grammar with subtle realism. Thus, it comes off as no surprise that the films depicting the Yakuza are a genre of their own, popularly called Yakuza cinema. These stories have been told more frequently since the Japanese new wave. A few prominent examples are the hypnotic Branded To Kill (1967), Ichi The Killer (2001), and Fireworks (1997). Takeshi Miike and Kitano are the most important names, their works mixing anesthetic cinema pleasures with gritty realist storytelling in a way that rarely fails to surprise.

But despite such settled grounds, Kojima Oudai’s choice of premise and his treatment still feel like a brave attempt. Not because of its daring narrative, but for making such a vast film his debut work in Japanese cinema. Oudai needs to be lauded for his ambition, and his fearless plunge into the fetor of the underworld this early in his career.

The director has repeatedly claimed in his interviews that his film isn’t inspired by, and finds itself as quite different from the other Yakuza films. However, it’s clearly an inspired fiction, dropping influences based on style concerning the classic works both in Japanese and other Asian or even American film industries. Even the premise has a very familiar feel right from the beginning. It’s structured complexly with forgettable names and alliances and a dense range of heavy information. Of course, this doesn’t stay for too long in the head. But ultimately, the humanity and simple attempts not to get involved anymore and to get pushed into crime inform the overall vision, makes it work. 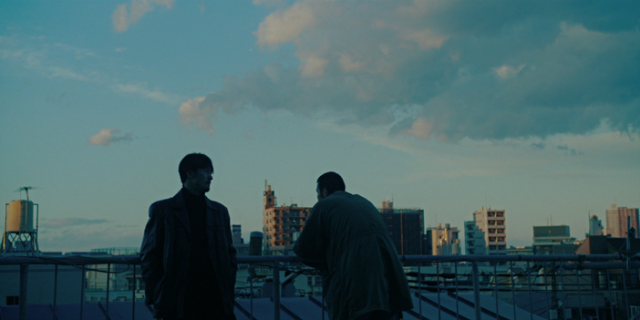 Ishigami Takeshi doesn’t return to Tokyo directly after serving his prison time of two years. For the next two years, he tries to set up his funds by working on a construction site. When he finally does return with the help of his best friend Yasu, he needs to raise more money to free himself from the clutches of the underworld. Now, this means diving deeper into the business. He enlists his Korean friend Junghi and starts a business selling data for phone fraud to his Yakuza friend Yuki. But when his path is quite clear with the growth of his business, the old alliances and a split in the yakuza family start dragging him back towards his old ways of living.

While it all seems closely heard of, Oudai is successful in bringing a certain freshness out of the material. It isn’t hesitant about depicting ruthless violence, it just makes an unusual choice not to depict it unless necessary. It is incredibly informative for a genre film about the relationship between technology and trade. The immediate fall into the world of data analytics and investment capital is persuasive if you go in completely unaware of the film’s substance. The leading performance by Ikken Yamamoto is impressively understated and keeps one engrossed when he is on the frame.

Having said that, Joint isn’t a very entertaining and provocative film. It isn’t too keen on developing the interest of people behind the motives of the core members of the family. This takes some meat from the character sketch of the protagonist. Kojima indulgently goes about structuring the alliances. He writes dialogue that’s too distant and mechanical at times. It is as if these bulky mobsters are humanoids with bits and pieces of a beating heart. This is also to say that the film’s structure feels too generic and intermittently frustrating, overall.

However, despite its messy and ultimately generic nature and voids which need a lot of filling, Joint works. It’s a poignant and freshly impressive spin on the modern Yakuza film. Surprisingly, it has also got a minimal indie heart.

Soul of a Beast [2021]: 'Locarno' Review - A Visual Fantasy with Entertainingly Deranged Moments