How often does one go to watch a movie in an almost empty theatre on a Saturday night? That doesn’t really sound like a great plan for the weekend, right? But, that might just be the perfect weekend plan for comfortably lonely introverts or people who appreciate quiet evenings every once in a while. Karwaan is just the movie for such people.

Karwaan is a road movie set against a dark yet comical premise. Avinash, played by Dulquer Salmaan, comes to learn of his father’s death in a road accident. He is not completely shaken by this news though, as he hasn’t been on talking terms with his father for quite some time. He holds a grudge against his father for not being supportive of him pursuing photography and for forcing him into corporate slavery, the monotony of which he clearly doesn’t enjoy. However, things take an interesting turn when he discovers that he has been wrongly delivered the corpse of another lady instead of his father’s.

The air is cleared when he figures out that there has been a mix-up and his father’s corpse is with the lady whose mother’s corpse is with him. Now, the lady called Tahira who runs a hotel in Coimbatore, owing to some circumstances, cannot make it to Bengaluru to exchange the coffins and so Avinash takes it upon himself to go to Coimbatore instead accompanied by his friend Shauqat played by Irrfan.

They also take a detour to pick up Tahira’s daughter Tanya from Ooty. And then, like most road movies, they embark on a whimsical journey of self-discovery. Someone finds love, someone finds direction and someone finds clarity in perspective along the way. But what they all find in common is that all three of them have daddy issues.

Cracking or even laughing at jokes about dead people is something most people wouldn’t be comfortable with. And there’s the ever-persisting risk of crossing that fine line between humor and insensitivity. However, Karwaan manages to pull off the dark comedy aspect without offending anyone. The humor, all throughout the movie, is subtle, and not blown out of proportion. This is a movie that will make you smile and giggle but will never really make your tummy hurt with laughter.

Karwaan has just the right amount of humor, which is a welcome break from the over the top comedies of recent times. However, the dialogues penned by Hussain Dalal lack rhythm and feel a little out of place at times. Somehow, the dialogue writer could’ve done more justice to Bejoy Nambiar’s promising ‘feel good’ story. Karwaan isn’t really an emotionally moving or a thought-provoking cinematic experience that one cries over or thinks about after exiting the theatre. All road movies do not have to be that.

The screenplay by Akarsh Khurana and Adhir Bhat is fresh and light-hearted. This movie doesn’t take itself too seriously and so, it seems just fine as it is. There’s a monologue by Avinash in the end though, that might choke or tear you up a little.

The cinematography by Avinash Arun is breath-taking. The visuals are a feast for the eyes. The greenery all around and the colors overall are very soothing. This movie does a very good job of highlighting the vibrant South Indian culture alongside the narrative as well. Maybe it’s the unexplored nature of South India in Hindi films that makes the entire landscape so endearing and appealing. 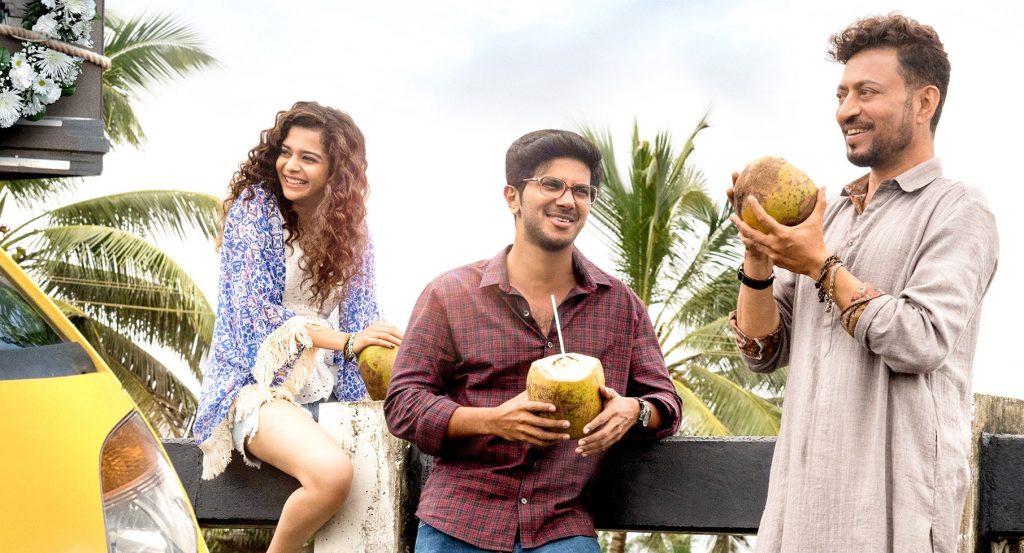 There are two moments or scenes in the movie that really stands out. One is that of Avinash and Shauqat catching a glimpse of a herd of deer, which couldn’t have been scripted. And the other one is that of a calm lake with ripples in the foreground while their vehicle passes by in the background. The makers deserve credit for their presence of mind and creativity while capturing these moments in particular.

The casting in this movie is spot on. The performances feel real and relatable. The characters are layered and all the actors play their parts in an understated manner. What’s refreshing is that the characters don’t come with a lot of emotional baggage and so, they don’t feel intimidating at any point. They might have their own issues but they aren’t utterly miserable either. As leads, Dulquer Salmaan, Irrfan and Mithila Palkar appear to be people one wouldn’t mind hanging out with.

Dulquer’s character is miserable but he doesn’t emanate that in the environment. Irrfan’s character is funny and slightly conservative but he never comes across as an unlikeable bigot. Mithila’s character is that of a rebel teen but not of the annoying kind. The supporting cast too does a great job of complimenting the leads and hardly anyone feels out of sorts.

But the best thing about Karwaan has to be the music. The album composed by Anurag Saikia must have actually attracted a big chunk of the movie’s audience. And in fact, is it even a good road movie if it doesn’t have great music?

The movie both begins and ends with songs by Prateek Kuhad, who knows the perfect recipe for monsoon songs. His song, in the beginning, speaks about stagnation, the feeling of being stuck, becoming irrelevant and getting lost in the crowd. And the one, in the end, speaks about being carefree, courageous and moving forward no matter what. His songs act as the ends of the character arcs for all three leads.

There’s an ideal journey song by Arijit Singh as well that one can listen to while staring out of the car’s window. There’s also a beautiful romantic track sung by Papon, with odd yet amusing lyrics. The rest of the tracks might not be as exceptional but they blend in with the tone of the movie just fine.

In conclusion, one has to admit that Karwaan isn’t great or perfect but it doesn’t feel like a movie that tries to be either. Even if you fail to catch this movie at the theatres, you can watch it later when it is available on digital. Either way, the experience won’t feel any different. Karwaan is food for the soul, not for the brain. It is one of those movies you can enjoy in a quiet and cold environment with something warm to drink.

Karwaan might not be director Akarsh Khurana’s cinematic masterpiece but it is definitely worth your time and money.

[WATCH] Ready Or Not Trailer: Samara Weaving fights for Survival in a Deadly Game