Home»Reviews»Films This Week»Mass (2021) Review: A Terrific Directorial Debut that Doesn’t Capitalise on Pain
Films This Week/Reviews

Directorial debuts are supposed to propose fantastic ideas about what the concerned debutant filmmaker’s works are going to be. It’s especially true with debut films consisting of an expansive scope, rich monologues, and an A-list cast. In such an expansive, expensive world, it’s perhaps reassuring that a debut film like Fran Kranz’s Mass (2021) even exists. Reassuring because this utilizes every involved resource at its most minimal. Although it altogether pans before the Coronavirus, it plays out as a chamber piece in a single location. The scope of the narrative is confined to a single day, free from developments like flashbacks or even quiet movements.

Richard and Linda have lost their only son. So have Jay and Gail. The two couples have decided to confront each other and talk in a rather reserved room of an Episcopal Church. Naturally, one would expect it to be an odyssey of grief, marked by pauses that make perfect sense. However, the closure alone is twisted. The son of the former involved himself in a school shooting and killed the son of the latter among quite a few others. To escape the clutches of hard contact, Hayden, the boy, killed himself in the said school’s library. Thus, there’s nothing but peace in this isolation of words. Most of the words uttered are steeped in formalism. However, this isn’t to say that there aren’t outbursts of confrontation. They ought to be here. The father of the victim is bound to get mad that of the perpetrator. In an affecting way, the mother of the perpetrator naturally empathizes with this son of hers, who “shouldn’t have been born.”

Talk therapy is such a fine solution. It’s spiritually cleansing for the affected. But in a situation like this, where distress arises out of something which is molded from no sense of peace, a back-and-forth is obvious. Fran Kranz takes this obviousness and stitches it into his skilfully woven fabric. He carves the most profound impact in moments that carry no relevance generally. It holds extreme power and it comes out from the most unexpected places. Assumedly simple dialogues morph into grand monologues. For the last ten minutes, I was sobbing copiously. 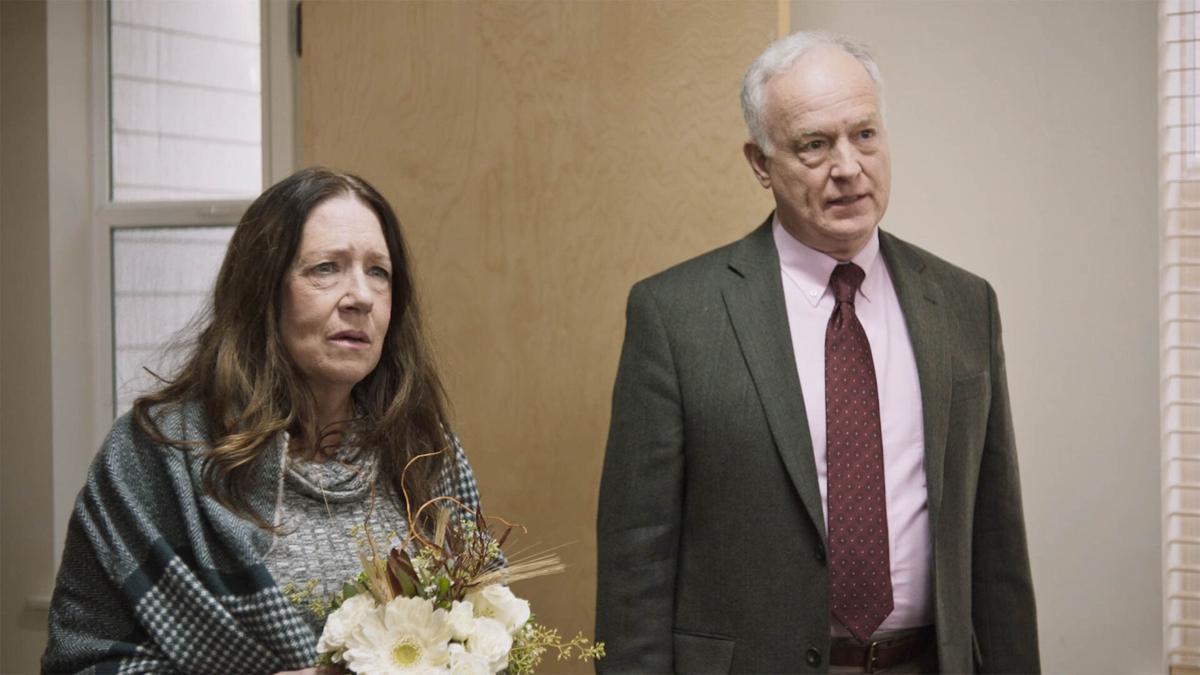 I also realized how compellingly the film captured the subjectivity of loss. The two women, Gail and Linda, have the ability to show their grief through their eyes and glances. But we also see how the two clearly have different coping mechanisms. Both the parents have hardened by time and memory. Their sentiments are all explicit in places and wholly implicit in others. Perhaps that’s why when the true outbursts come, they tend to move you in the most unexpected places. Mass carries exceptionally heavy themes within it. Mental health, consumption of violent online games, the hard truths about harmless bullying, and the bulk of adulthood.

And yet, what stays with you the most are the little, beautiful things it conveys. It, most exceptionally, talks about how dying without meaning something greater for the outer world is completely okay. Also, it talks about how forgiveness can be the greatest source of closure. There’s a comment about how stories can provide endless context, rationality, and reason. The extraordinary writing ensures the non-cinematic nature of the film to thrive with flourishes. The organic visual imagery of the barren fields with fabrics tied on fences strives to invite contemplation. The clothes worn by Jay and Gail are earthy in their color and texture, cleverly subverting the tropes of the victimized parents. However, a clear contrast is seen in the clothes of Richard and Linda, who seem almost ready for a funeral.

However, the writing doesn’t deal with simplistic beats. Jay is outrageous, Gail is quietly critical, Richard is hard as a rock and Linda is deeply sentimental. But these aren’t designed to be character traits. Rather, they are just various ways in which these characters process what has happened to them. It is quite fascinating how we see the incident through the ‘words’ of four people who just sit and talk with each other. At times, the tone reminded me of Noah Baumbach’s Marriage Story. The writing is a masterclass in organic sentimentality.

The acting performances are almost as brilliant. The actors perfectly agree with the fine-tuned rhythm of the writing. Ann Dowd, in particular, is the star of the show. As Linda, her character risks at high melodrama. But her delivery is so mature, hardened, and full of life that it might just be one of the best this year. She is terrific as the mother of Hayden, the perpetrator. Some of her delivery is so heartbreaking that it’s hard to watch this middle-aged breakdown. 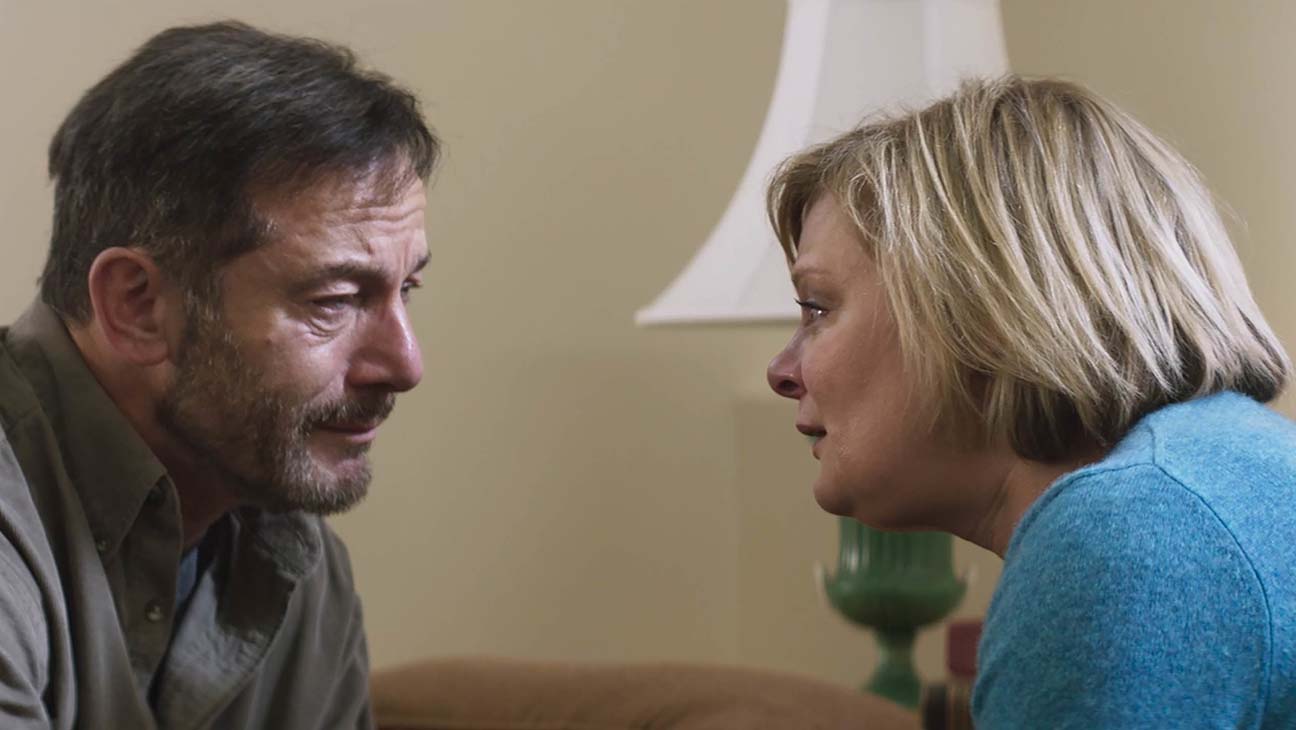 Martha Plimpton as Gail is awesome in reflecting the grief of a mother dealing with this unexpected loss of a child. Her compelling performance seems to crack the code of Kranz’s filmmaking. Jason Isaacs as her husband Jay is just as supremely intense. The turmoil shows in the intermittent glances of Reed Birney, who is supremely effective in his rendition of Richard. The four essential players are complemented by supporting actors as well. But they are probably the weakest shot of the film, weakly acted and sketchily written.

Mass, however, is above its non-cinematic format. It is above its loopholes as well. It marks the arrival of a fantastic directorial voice who truly understands humans and their ability to grieve. In these times of distress, we need that. Most importantly, it doesn’t capitalize on pain.

Mass releases in US theatres on October 8th