‘Melancholic’ is Seiji Tanaka’s debut feature. It is a genuine attempt at combining different genres within its narrative while dealing with the coming-of-age journey of its central character. It brings different elements to the table that try to elevate it, occasionally to a more surreal ground. Sadly, the script can’t sustain the required tension leaving the film with only a few admirable points.

The protagonist of the film, Kazuhiko (Yoji Minagawa), is unemployed despite being graduated from the prestigious Tokyo University. Not having any kind of work experience in his hand, his parents try to find him a job. Dealing with ennui, for the most part, Kazuhiko has to prepare himself to work, for which his parents try to persuade him with their enthusiasm. Meanwhile, he meets his school-mate, Yuri, who finds it hard to believe that he’s unemployed. She invites him to their reunion party while suggesting him a job at the local bathhouse. As a result, Kazuhiko decides to work there.

His boss Azuma offers another person, Matsumoto, a job to work along with him. There’s a sense of intrigue for him to see a nobody like Matsumoto getting selected when he’s much more qualified. On one of his working days, he finds something suspicious in the interaction he has with his boss. Not long does it take for him to realize that the bathhouse was being used as a place for execution and corpse disposal. Being unknowingly a part of such shady activities surely disturb him in the beginning. But knowing the possible outcomes, he gradually evolves to accept certain things. His journey leads him through many personality shifts seeking him to find the simple moments of joy during the process, despite the melancholia enveloping him. 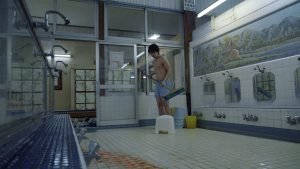 Not giving out any more details from the plot, I’ll definitely claim to be intrigued by its aforementioned premise. But the film drags too much through its coming-of-age arc while having to offer very little substance to back it up. The supposed shifts feel a little too obvious after a point because of the excessive length often removing the required tension for his adventurous journey. Even the final outcome, tying the knots between these two characters is pretty compelling by itself; it hardly feels earned with its unmotivated dragging scenes. Even some of its conflicts feel redundant at times. The film could have easily been a little tighter to flesh out its genuinely better moments.

Not to say that it does not have any admirable elements. The journey of both the characters leads towards trying to escape from their existing life to seek freedom from their individual, mental baggage. Whether it is the mundane reality of Kazuhiko or the conflicting one of Matsumoto, the script tries to find a justifying closure for both, while clinging to the moments where they get a sense of connection.

The characters seem well-grounded in reality. Even when they belonged to the different worlds, both of them were jobless and were trying to have a meaning for their lives. Besides, Yoji Minagawa is more than impressive as Kazuhiko where his calm persona builds into the eventual confidence through many believable points, which could have easily seemed contrived if not for his performance. And still, none of that helps the script to thoroughly engage us, because the film gets unnecessarily stretched at times where one can predict the gradual shifts.

As a result, ‘Melancholic’ ends up being just an admirable attempt where the steam goes off much before any moment actually starts to boil.

What exactly is Under the Silver Lake?