Can you picture how drop-dead gorgeous this city is in the rain? Every city has its own character, at least in Woody Allen’s films. There are countless times when we hear that a good story must hold itself on its own, it doesn’t really matter where it takes place. That is certainly untrue if the city happens to be Paris. ‘Midnight in Paris’ is Woody Allen’s attempt at dealing with everything that is either Parisian or else something that has come to be associated with himself.

New York has been a city that Allen has portrayed a lot in his work. His best works, Annie Hall and Manhattan have a lot of the city itself in them. The hustle-bustle, loneliness, dysfunctional relationships, and the idea of a city busy with itself creep in effortlessly into these films. Midnight in Paris could well be a French arthouse film. It has a lot of elements associated with the ‘cerebral French filmmaker’. It could find itself being discussed in intellectual circles: men with receding hairlines, dark suits, thick-rimmed acetate glasses, cigarettes, and coffee, debating on its relevance. But what pulls the film out of a select audience and a monotonous commentary is Allen’s narrative and direction.

Related to Midnight in Paris: 10 Best Films of Woody Allen

Midnight in Paris is about a couple vacationing in Paris. Gill Pender (Owen Wilson) is a jaded yet successful Hollywood screenwriter who is trying to write his first novel. His fiancée Inez (Rachel McAdams) is the daughter of a rich businessman and wants to live a luxurious and materialistic life in Malibu. Gill is a completely different person, though. A romantic at heart, he wants to settle down in Paris and write real literature instead of writing forgettable scripts to earn a fat paycheque in Hollywood. He has also fallen prey to what is referred to as the ‘Golden Age thinking’.

The idea that the era that has gone by is far better than the times one lives in. Further down the story, he actually gets to time travel to the age he thinks is the golden age: Paris of the 1920s. He meets literally everyone from that era: Hemingway, the Fitzgeralds, Picasso, Matisse, Dali, and so on. He finds love in Adriana (Marion Cotillard), who is also prey to his thinking. For her, the best era is the Belle Époque. The movie starts with a 3 ½ minute montage of Paris with Cole Porter’s ‘Let’s Do It’ in the background. It is easy to see that Paris is indeed a place that attracts dreamers and romantics. The cinematography of the movie is especially brilliant. The way the city is portrayed in warmer colors in all its glory makes it highly palatable. The lights that shine on cobwebbed buildings, the orange glow on the Seine, the ambiance of the 20s Paris draw even the driest viewers into the romantic daydream.

The movie explores a variety of themes: romance, existentialism, modernism, nostalgia. But essentially it is about a man trying to come to terms with a conflict he has been carrying on for a while. The conflict is a celebrated debate, though. Whether what has passed is the golden age or the one we live in? And whether an existential and materialistic life is happier than a fulfilled life following one’s true calling?

Also, Read – Notre Dame in Films: 8 Films That Gave An Ode to the Iconic Cathedral

Gill finds himself conflicted not just in terms of life choices he must make but also in the love of three women. His current fiancé, Inez, a representative of his current existential life, materialistic and morose. Adriana, his passionate dreamy love from the era he longs to visit, Paris of the 20s. And then there is Gabrielle (Léa Seydoux), a fresh respite from the morose existence and the delusional past, who welcomes his idea of staying in Paris and its beauty in the rain. 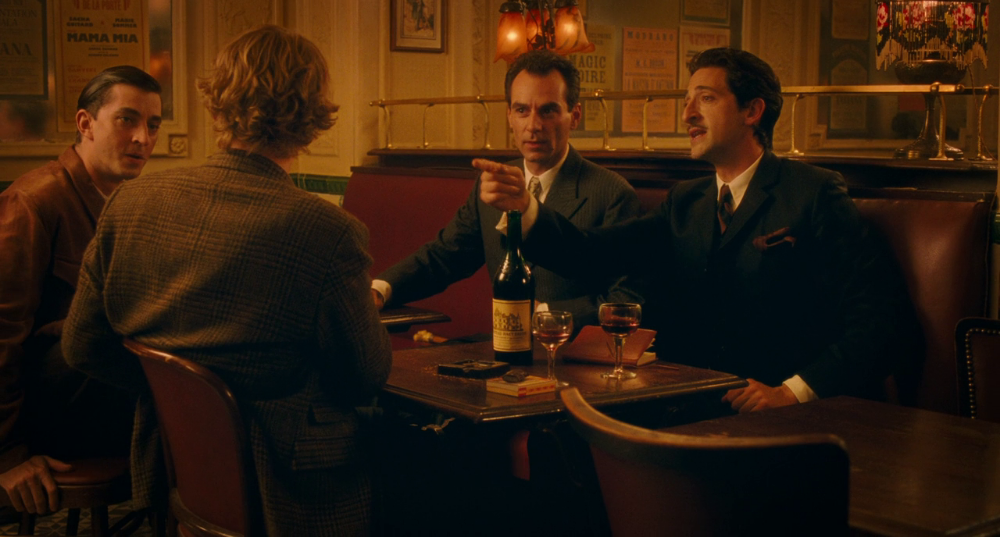 The movie is not free from the clichés that have come to be associated with Woody Allen as a writer and filmmaker. He has survived for far more than his fair share of making films relevant to the times. The fact that some still manage to move audiences speaks volumes about his vision. Gill is the non-conformist protagonist who doesn’t really fit into the scheme of things as it were. Ernest Hemmingway is the feisty man who equates the absence of fear to making true love to a woman. Salvador Dali is a surrealist who would rather focus on his baritone than the problem at hand. There is humor in the chaos, soft sarcasm in difficult situations. As usual, the end is open for a new beginning, only if one believes that it isn’t too late.

Midnight in Paris is a giant merry-go-round in the theme park that happens to be Paris. Everyone can take a ride, though everyone won’t be equally impressed. Allen’s ability to infuse pertinent themes of existence and nostalgia into a narrative around Paris and its history of art is certainly praiseworthy. The present in the film is a bit problematic, yet the glorious past fuses well with the narrative. This is certainly not the best offering from him, his best has long been in the past. But Midnight in Paris is a worthy contender if we consider his recent work.

Gulabo Sitabo (2020): 'Prime Video' Review: A Tale of Landlord and Tenant That Barely Takes Off