In the process of childbirth, it’s not only a baby, an infant, who is born. With the child, a mother is reborn too. Her new experiences, her new quandaries, and a new state of mind altogether. Art hardly depicts this emotional construct with confidence: however, Norwegian filmmaker Yngvild Sve Flikke breaks the ice in her film Ninjababy – a constantly surprising character drama about the mental turmoil inundating pregnancy and childbirth, and how people often review themselves and their choices as they go through this emotionally exhausting stage. It is only right, then, that Yngvild embraces her female perspective to tell the story.

Rakel, 23, lives with her best friend in a flat partying her life away. In crazy episodes following a one-night-stand with her martial arts instructor, she learns that she is 6 months pregnant and that abortion is impossible. Who the real father of her baby is the least of her problems: she wants to determine the adoptive parents of her child. At the same time, the illustration, the idea of Ninjababy that she initially sketched right after her pregnancy, jumps out of her diary and keeps hinting to her about how awful she is.

Through such an assorted narrative, Ninjababy asks a lot of questions: is the health-related dilemma her’s, or is it the baby? Who is the real father- the weird Dick Jesus or the sweet-natured Mos? And above all, is parenthood a choice or is it inevitable? Perhaps the most persuading thing about the film is its unwillingness to answer any of these questions. The film grabs you to care for its protagonist and you want to care for no one but Rakel- you want her to prioritize herself. Because coming-of-age means to put yourself above everything else. The incredibly understated filmmaking keeps Rakel at the centre of the proceedings, seldom deviating the camera from her face.

This works because of the phenomenal leading performance of Kristine Kujath Thorp. Any critical commentary of Ninjababy can’t apprehend it entirely without mentioning how good is Kristine in it. In what might go down as one of the finest leading performances of the entire year, the actress blends her comedic physicality with empathy in her expression. The young actress is a talent to look out for because she almost destroys everyone sharing the screen with her, although the supporting performances brim with lively energy within them. 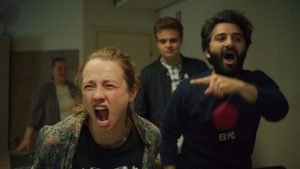 The comedic writing in Ninjababy is razor-sharp: it is enjoyable how crafty its understanding of a congested state of mind is. But the maturity develops even more delicately in the moving sequences. The nuanced screenplay has a clear eye for extorting intricacy from the most improbable places. Also, the scenes where the Ninjababy talks to the pregnant Rakel are devised with absolute brilliance and idiosyncratic compassion. Marianne Bakke’s mesmerizing cinematography serves really well with the film’s well-conceived account of a woman’s coming-of-age. The editing of Karen Gravås is warm-hearted but outstanding in how it moves from a moving sequence to an amusing one.

Also, Ninjababy’s fusion of animation and live-action is excellent: the way the film uses the animation to get into the head of Rakel deserves applause because this develops an intimate intelligence of human nature and a sense of learning to let go: something which reminded me of the out-and-out three dimensions of Pixar. The hormonal shifts have been potently depicted as a series of dots not interconnected with each other. The meticulous humanism in the character of Ninjababy is one of the pleasantest things about the film as well.

Ninjababy is too long in its close to two-hour running time. The last thirty minutes could have used a better tone to work with. However, these are a few trifling issues in a smart, persuasive, and overall entertaining take on a woman’s pregnancy and coming-of-age. And an essential independent film that must be admired for what it propagates. At that, it breaks the fourth wall frequently with simplicity and a consistently charming nucleus.