Vijay Jayapal’s second directorial feature, Nirvana Inn, is centered on the trappings of guilt and remorse that slice through a man’s soul and equilibrium. Its emissions are strong and cascade in multiple ways over a person’s realities and consciousness, semi-permanently blindsiding him until he is compelled into his long-due realizations. Comprehension and acknowledgment of the outcomes of one’s unthinkingly jeopardizing actions are an inexorable truth. Unbidden, the past steadily spills into the present and hangs precariously over one’s fate or destiny, like a Damocles’ sword.

Jogiraj Chakraborty (Adil Hussain), a middle-aged man, has been hired as a manager at Nirvana Inn, a small tourist resort in Manali. He is originally from Majuli, Assam, where he was a Bhaona folk dancer before becoming a boat driver. The life he had behind in Assam trickles into the narrative in the form of stray wordless sequences on his boat and his dance. At the resort, when he lies on his bed, he hears almost-bestial clobbering and animalistic growls.  He stumbles across women who are in the throes of exorcism, men determined to break the malevolent spell that has overtaken and possessed these women. A woman whom he rescues from an assault, Mohini (Rajshri Deshpande), appears at the resort hoping for a job and is employed by the boss, Kumar, who turns out to have nefarious designs of his own.

He recognizes in Mohini remnants of a chucked away memory which she initially rebuffs, not with force but a rather cavalier response, that soon whizzes into sharp focus, shadowing and encircling all events the narrative entails. There is also another woman, Leela (Sandhya Mridul) who lives in a cottage nearby and is keen to familiarize herself with Jogi’s attitudes and ways, perhaps for her documentary filmmaking purposes. He finds himself frequently trailed by a demon masked figure. He is perturbed by an especially kooky tourist family and the kids of the family drive him to his final self-appraisal.

Though I must admit the kookiness, the strangeness of the behavior of the family and in particular that of the kids exhibit feels too designed, and the construction of their comportment strike a note of artifice. A scene in which a boy frightens Jogi by switching on a fan while the latter’s perched on a stool and is trying to fix a lightbulb loses half of its drift, because the child actor’s expression of gleeful, smiling menace comes across as manufactured, a byproduct of a viewer’s expectations built over years of horror film watching practice rather than sticking to the natural and emotional components of the mise en scene. Improved utilization of the kids is a scene during a sightseeing session where the kids almost tear into each other, and slap and beam brightly, while the parents stay decisively remote and aloof, blissfully or more accurately, stoically unconcerned and oblivious. 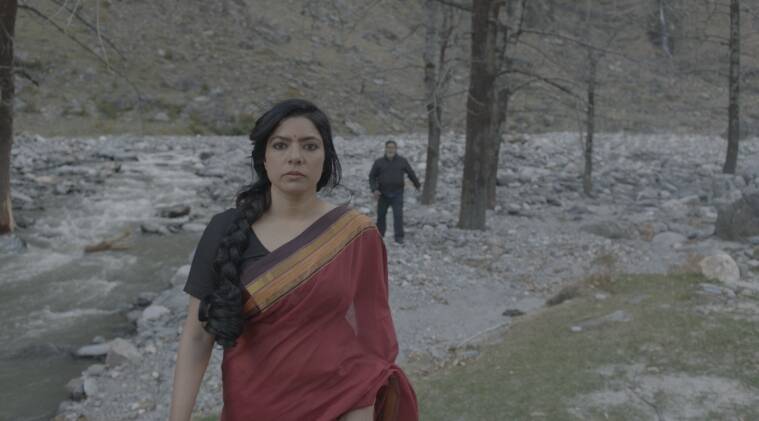 Jogi senses a preternatural ambiance, and Jayapal creates a mood of thickening intrigue which constantly flirts with an inscrutable temper of filmic tenor but remains a step behind the positively tantalizing. Jogi is battling his own compunctions and the haunting is constant and relentless, hounding his every action or the preceding thought that guides it. This is of course a dark night of the soul stretched over an unyielding sweep of time, which must be interceded in a location and geography that forces and imposes an ineluctable reckoning.

The surrounding characters are a conduit for that. The film is most effective in its muted moments. The nonverbal exchange of gestures between Jogi and Mohini is intensely realized but Anantharaman Karthik’s Hindi dialogues are clunky and repeal the power of many a scene where the two fine actors share a moment or two. Both Adil Hussain and Rajshri Deshpande are two terrific actors to be encumbered by lackluster dialogues.

Rajshri is compelling and she locates something unknowable and inaccessible about Mohini. Adil is unsurprisingly excellent. He physicalizes the persistent damage of his deeds in a performance that is both loose-limbed in its execution and in full cognizance of the soberness of the situation. The gravity of the circumstance isn’t translated into convenient overbearing acting flashiness to stress it. Watch him closely in the scene where he breaks down and confesses to his acts, contrite. The camera’s tight on his face and his visage reflect a gradually unfolding plethora of heartbreaking regret, uncertainty that he had once grappled with, and the ultimate grasp of the overarching fatal implications and repercussions of his actions. It is absolutely breathtaking in its naked, unvarnished honesty and easily among the finest acting, I have seen this year. It is unadulterated, wholly transparent and a spectacle of conviction.

Nirvana Inn suffers in places because few characters aren’t written with much flair and intelligence. I was invested in Mohini primarily because Rajshri has a charismatic presence and plays Mohini with a subtly inviting air, but the breadth of the character is far too little to actually make you stay interested. An interesting scene wherein there’s a homoerotic angle between Mohini and Leela, as the former intoxicates the latter, is captivating but a sudden amplification of the score is jarring.

While for the most of it Rajesh Saseendran’s sound design abjures the crutch of ominous thrills, I couldn’t fathom abrupt-looking decisions to heighten and take it to a crescendo in key tensed moments, nor the ungainly zoom-ins on the faces of the actors. These struck me as too uncharacteristic of the particular tonality of the film; they don’t sit well with the other aspects of the visual and auditory aesthetic bent of the film. Editor Dorai Prakash nicely toggles between the crisp flashbacks and the present and endows a viewer-friendly swiftness of rhythm to the unhurried narrative. The pace is leisurely yes, but it doesn’t push you exceedingly or make you impatient. 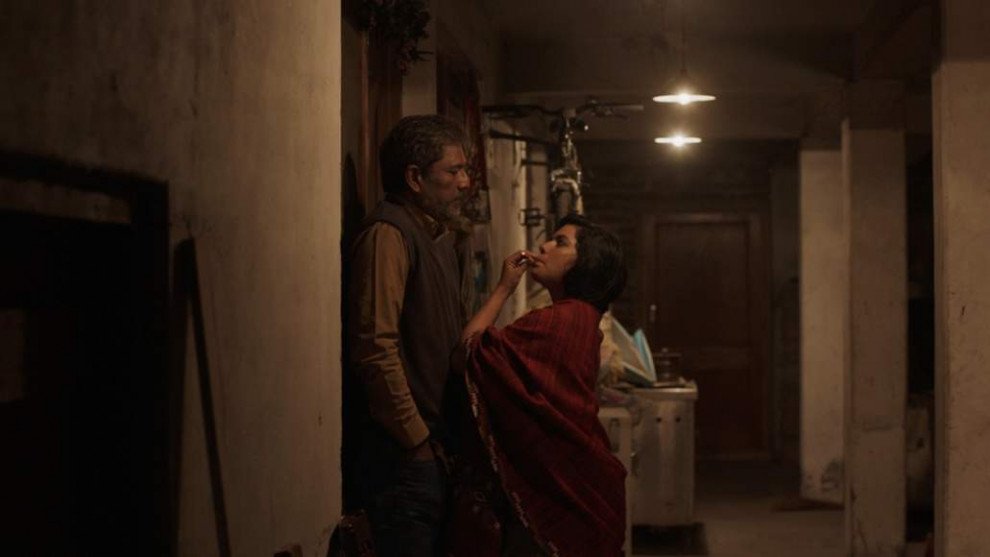 The gaze is on the implicit threat of women who don’t toe in with the set social norm. Women have to be exorcised and physically subdued and chastised. Men make unwanted sexual advances on women and the women resist powerfully with unequivocal clarity. The women in the film are vocal about how they want things to be and what they will not comply with nor meekly agree to endure. They aren’t afraid to challenge the status quo just because of past generosities endowed on them. There is a nice understated sense of agency both Leela and Mohini in the film possess though punishment for any aberrant behavior is always lurking around. Sandhya Mridul is charming but her character’s descent into unsalvageable neurosis should have been etched out with more precise strokes and feels a tad too rushed.

Some things in the film are unnecessarily underlined as well. I was miffed as Jayapal spends a span of a good few minutes explaining away the masked figure and not be trusting of the viewer’s ability to figure things out themselves though I will admit I like his choice of inserting a full-blown action sequence in an indie. The writing is wobbly and the direction uneven but Jayapal has the skill of creating fascinating characters, provoking teasing, perplexing interactions, and his ear and eye for a place and terrain is indubitable. While the first hour sails by, the second reveals the cracks, and the eventual winding into the climax peters out, in terms of engagement and persuasiveness.

I wish its mysteries were achieved with more dexterity on the writing stage, but you can still check into this inn.

The Best Gambling Films on Netflix

Mads Mikkelsen starrer ‘Another Round’ Sweeps the European Film Awards 2020