The Petrified Forest [1936] Review – The Get-Together of Kindred Souls

One of the earliest movie crazes of the 1930s was a rash of gangster films. Most gangster films (particularly the American), from the 30s to now, follow a predictable pattern: a young small-time thug proves himself in his ‘field’; he enjoys wealth and unbridled power eventually taking a big fall. These films had its appeal, since the downfall of a gangster is abrupt, compared to the lengthy, celebrated sequences of his pleasurable lifestyle. Films like Little Caesar (1931), Public Enemy (1931), and Scarface (1932) were pivotal movies of the era when law enforcement was seen as inept and corrupt, public concerns for education escalated, and job opportunities starkly declined (the era of Great Depression). No wonder that these crime films found very receptive audiences, and continue to do so. Taking in the scowling looks of Humphrey Bogart, who looms over in the poster of Archie L Mayo’s 1936 movie The Petrified Forest, one might consider it as another great gangster picture of the era. Even Warner Bros. advertised it as a gangster flick during its release.

But, The Petrified Forest is simply a study of an individual and a nation, caught up among myriad contrasts. The movie evokes an image of a society on the decline but does so without proposing a distorted view of the American dream. The Petrified Forest is based on the famous playwright and Hollywood screenwriter (Rebecca, The Best Years of Our Lives) Robert E. Sherwood’s play. The screenplay was written by Charles Kenyon and director/writer Delmer Daves (Dark Passage, 3:10 to Yuma). 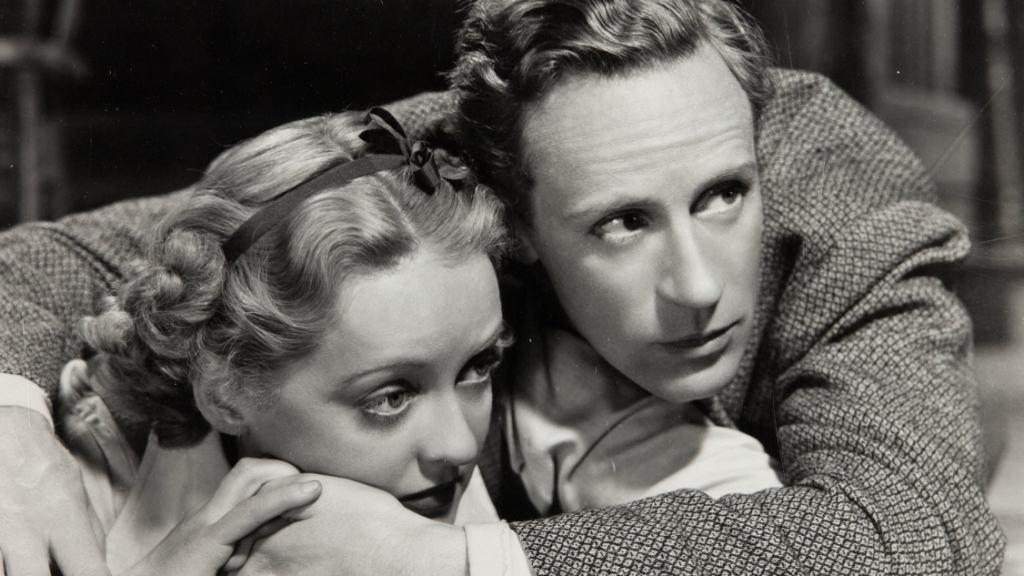 Veteran movie-man Archie L. Mayo helmed the project, who began his career directing slapstick two-reelers in the mid-1910s. Even though the movie prefers philosophical observations than rapid-fire action, and mostly confined to one-room, it is an important one for offering unflattering, naturalistic notions about American attitudes [in 1937, director Archie Mayo made ‘Black Legion’, again starring Humphrey Bogart, which dramatizes the activities of a racist organization in a small town]. The movie is set on the edge of the Arizona desert, close to a petrified forest, where trees have died and turned into stone. Like this odd stony forest, the inhabitants of the desert town to sit around unconcerned of the stagnant life.

Related to The Petrified Forest: My Darling Clementine [1946] – An Iconic Western Lore

Charming young woman Gabrielle (Bette Davis) wants to escape from the deadened spirit of the place. She and her father (Porter Hall) run Black Mesa Café, a remote shack amidst the dustbowls. Father Jason Maple is a World War I veteran and a self-confessed patriot, who goes off to meet with his military pals. Grandpa Maple (Charley Grapewin), an old codger, tells old tales of Wild West to the customers and about the time he was shot at by Billy the Kid. Gabby spends her time serving food to the customers, although she is interested in worldly ideas and compulsively reads the poems of Francois Villon. Her only companion in the caged-in place is Boze (Dick Foran), a former football player and gas pump boy, whose amorous advances Gabby often parries.

Into this climate of frustration and tedium, arrives a bewitching hitchhiker, Alan Squier (Leslie Howard), a failed writer and self-described intellectual whose European attitudes attract Gabby. She opens up to him, confessing about her French mother and dreams of escaping away to vibrant life in France. Alan, in turn, muses about poetry, painting, existentialism, his failed marriage, the current vagabond state, and aspiration to travel around and write something good.

The arrival of the vagabond clearly happens to be the most exciting thing to have happened recently in Gabby’s life. She even wishes to follow him, but Alan although taken up by her beauty and temperament decides to move on with his lonely trip. Gabby asks a pair of rich patrons visiting the café to take Alan in their car. From the earlier point in the narrative, Grandpa Maple and other visitors of the café are preoccupied with the news of mobster Duke Mantee and his henchmen, on the run from murder and robbery rap. Gabby sheds tears after Alan’s departure, but soon Alan returns, only this time with more guests. The ruthless killer Duke Mantee (Humphrey Bogart) and his cohorts hold the cafe’s inhabitants hostage, waiting for the arrival of other members of the gang. The situation boosts Alan’s love for Gabrielle and the ensuing stylized, philosophically-tinged speeches take the narrative deeper, avoiding heightened melodrama.

For the most part, The Petrified Forest is an enchanting piece of cinema that observes the divisions and contradictions of the depression era, or humanity in general. The contrasts occupy the attitudes between staunch conservatives and freewheeling liberals, between the subservient mentality and free will, between nature and human behavior. There are two African-American characters, one the Uncle Tom persona happily serving the rich couples, the other a free-thinking outlaw of Duke’s gang. However, the principal contrast is between Leslie Howard’s intellectual, aesthete and Bogart’s non-commital, delirious nature. 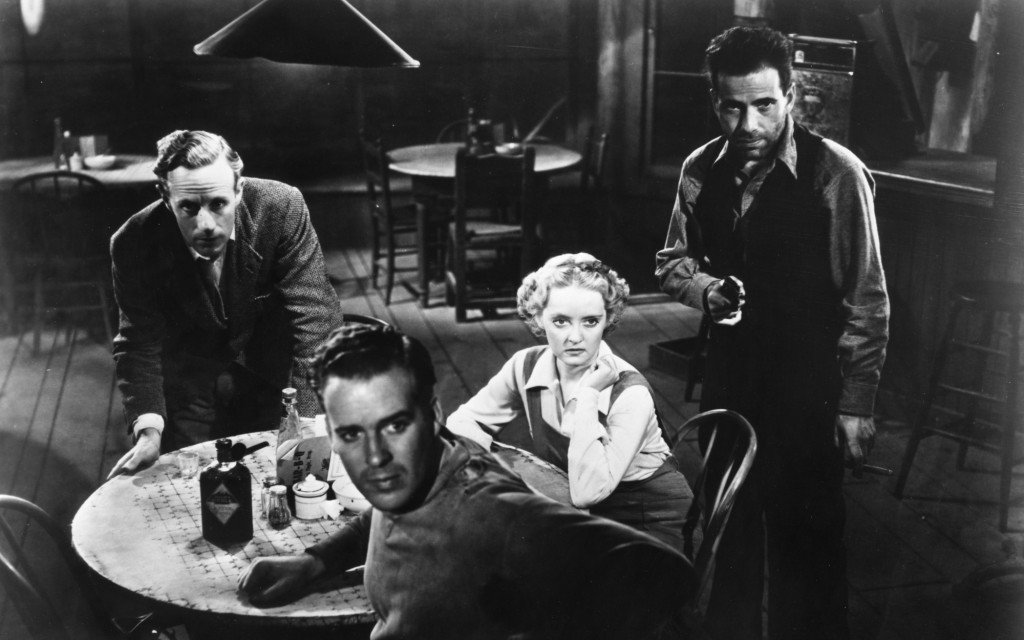 The clever juxtaposition of Howard/Davis’ romance and Bogart’s ruggedness adds another interesting overlap. Archie Mayo may not be an important auteur of the era, but he is a fine craftsman who knows how to get the maximum out of the incredible face-offs. And although the setting is confined to an artificial desert backdrop, the fluid staging and exceptional performative tone keep energizing the atmosphere. It might seem odd when all these ordinary people speak in a stylized manner about abstract ideas, but by adjusting to this heightened reality we come across a lot of spectacular dialogues to chew upon. Alan’s intense, elaborate verbalizations and Duke’s raging, terse statements are more memorable.

Also Read: The 10 Most Iconic American Movies of all Time

Duke Mantee is considered the first iconic ‘Bogartian’ role. Mr. Bogart mostly played second-lead roles during the 30s, before getting promoted in High Sierra and John Huston’s The Maltese Falcon. Duke is one of the actor’s earliest star-making roles, placing it amongst his other immortal cinematic roles. Leslie Howard (already an established matinee idol) was credited for forcing Warner Bros. to include Bogart in its contract to play this role. And, in the movie his character Alan, makes this delightful toast to Bogart’s Duke: “For you’re the last great apostle of rugged individualism.” That taciturn, gruff, wordless gaze, comprising the ‘rugged individualism’ is what makes Bogart’s presence overshadow the other two central performances.

Unlike the glamorous gangsters of the era, Duke is presented as a disillusioned, defective product of America’s economic failure. Bogart robustly inhabits this un-romanticized portrayal, whose toughness doesn’t really cheer up the audience (compared to James Cagney’s gangsters). Howard and Davis make up a highly watchable pair. Davis’ depiction of the character’s blossoming quietude and consciousness is excellent enough to savor. Charley Grapewin’s gramps provides due comic relief with his imaginings of the old west. He’s also a thoughtful character who demonstrates our collective desire for observing violence.

The Petrified Forest (82 minutes) with its fascinating allegorical representations, rich dialogues, and marvelous performances, holds up as a real treat for classic movie-lovers. Even the movie’s stagey, studio-bound sets bring a certain charm to the proceedings.

25 Great Feminist Films That You Should Watch

The Petrified Forest [1936] Review – The Get-Together of Kindred Souls