Bong Joon-ho's Okja (2017) doesn’t make a plea to people to embrace veganism. In fact, the protagonist Mija’s favorite food happens to be chicken stew. The movie’s intention is to once again insist on the disturbing food chain in capitalist society; to revise our inclination towards mindless consumerism. 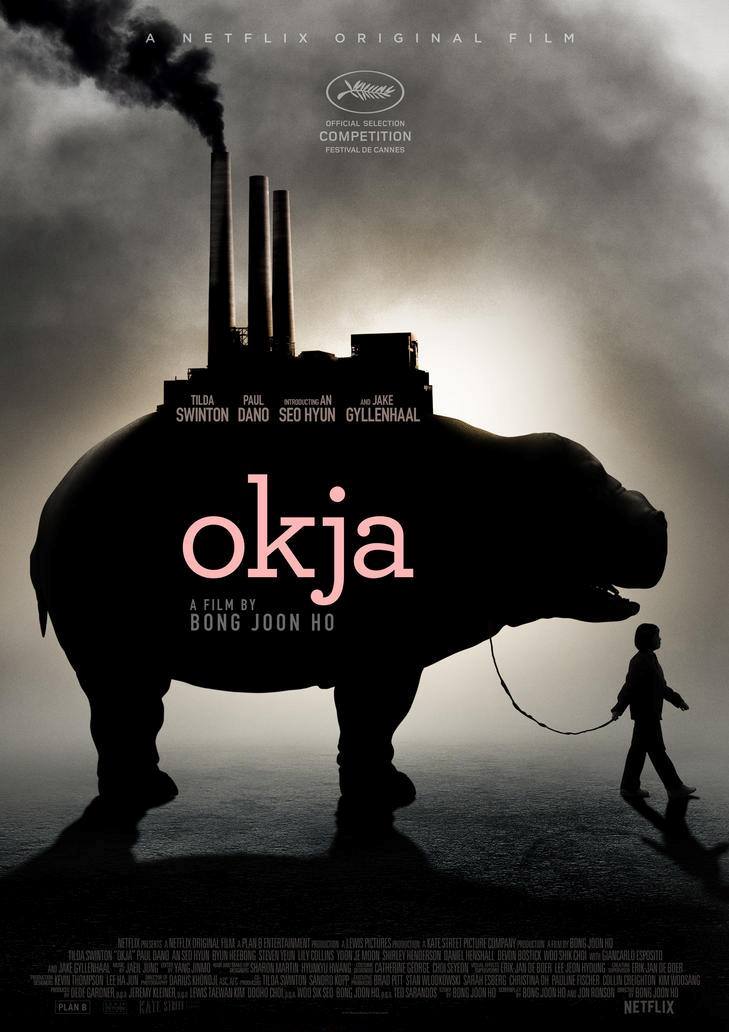 Korean filmmaker Bong Joon-ho is one of the most playful and stylistically unpredictable directors in the contemporary cinematic world. Mr. Joon-ho’s films are based on genre, yet he cleverly overturns certain genre rules to deal with stark socio-political themes. The Host (2006) was more than a monster-on-rampage feature; it employs wry comedy to jab at the government’s cockeyed environmental practices. Snowpiercer (2013) wasn’t just a gung-ho action/adventure set in a high-speed train; it doubles up as an allegory for the rampant social inequalities (the director also made a couple of genre-transcending crime masterpieces – Memories of Murder & Mother). Similarly, Bong Joon-ho’s latest fantastical outing tells the story of a young South Korean girl Mija and her genetically modified super-pig named Okja. Okja, similar to couple other Bong Joon-ho adventures, starts on the Spielbergian or Disney territory. Later, it swirls away from the generic path to touch upon heady topics like corporate greed, genetically engineered cheap foods, animal rights, etc. Formally, Bong Joon-ho’s movies smartly oscillate between soothing lyricism and ghastly satire. Subsequently, his characters are well-defined by their eccentricities. The result is an almost-perfect synthesis of different elements with a profound, humane core.

Tilda Swinton plays Lucy, the new CEO of Mirando Corp. (an Agrochemical company with notorious reputation), who in the opening scene proclaims ‘The Rotten CEOs are Gone’. She weaves a vision of kinder capitalism. With white hair, perfect teeth, and unbelievably chipper exterior, Lucy wants to revise the evil practices of her predecessors (which includes Lucy’s controlling identical twin sister Nancy). But make no mistake: Lucy is also a product of baleful capitalism. She is just concerned with company’s public image so as to design an elaborate, positive marketing campaign. When Lucy is stripped off her chipper posture, she comes off as a desperate woman with daddy issues, doing her best to keep running the gigantic engines of ruthless capitalism. Mirando Corp. publicly gives 26 of their genetically-modified super pigs to 26 farmers around the world. The farmers would raise the pig for ten years, and there’s a hefty reward for the farmer family which raises the biggest and healthiest pig. Jake Gyllenhaal plays the weird, pandering TV host who becomes the public face of Mirando’s super-pig competition. The damage-controlling marketing exercise involving super-pigs raised in a natural environment is the vital ploy to distract the public attention on GM meat products and from purgatorial slaughterhouses.

Ten years later, somewhere in the mountainous village of South Korea, 14-year-old Mija (Ahn Seo-hyun) and her benevolent big pig with sad face Okja are seen frolicking together in the blissful natural environment. The wordless sequences which display the strong bond between Mija and Okja pose a Ghibli-esque feel to it (the shot of little Mija sleeping atop Okja reminds us of Miyazaki’s gentle giant Totoro). Mija lives with her grandfather (Byun Hee-bong) in a modest home, who reassures her that he has bought Okja from Mirando Corp. Next day, Mundo arrives, the company’s Seoul representative. Accompanying him is the famous animal-loving TV host Johnny Wilcox (Gyllenhaal). He is taken aback by Okja’s huge torso and doleful eyes. He selects Okja as the winner of ‘super-pig’ contest. The pig will be paraded in New York to enhance Mirando’s image, before sending it to the slaughterhouse, alongside other thousands of Okja’s genetically-engineered siblings. To her grandfather’s dismay, Mija sets out to rescue Okja. First, she goes to Seoul, where she crosses path with members of Animal Liberation Front (ALF), run by soft-spoken animal activist Jay (Paul Dano). ALF’s intention is to not just rescue Okja, but also to unmask the unethical business practices of Mirando Corp. Caught in the crossfire of diametrically opposed intentions is Mija (she is sent to New York to participate in the ridiculous pageantry) and Okja, wishing to return back to idyllic life. 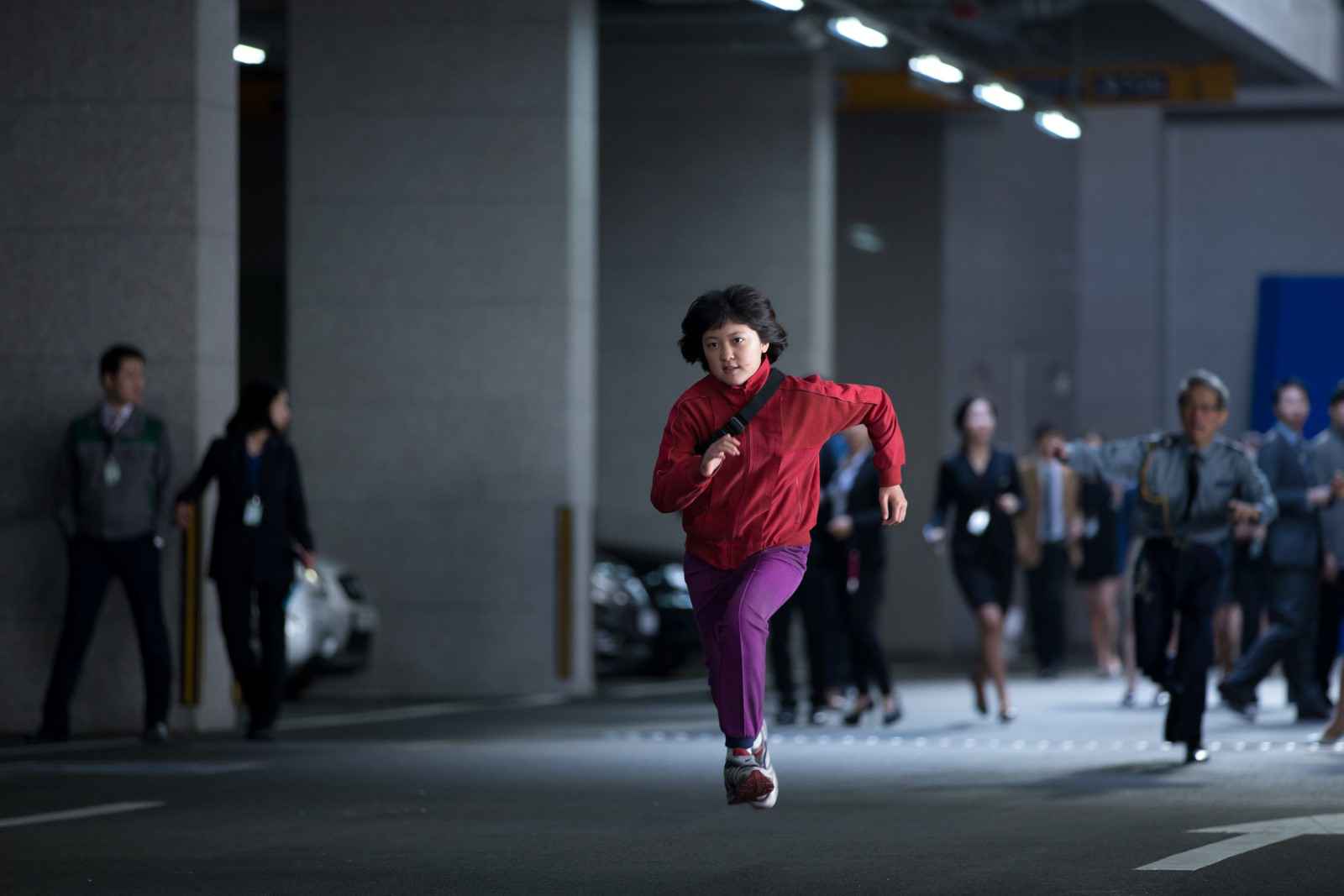 “Films either show animals as soulmates or else we see them in documentaries being butchered. I wanted to merge those worlds. The division makes us comfortable but the reality is that they are the same animal”, stated Mr. Bong Joon-ho (in his interview to Guardian). What starts off as a fun adventure, in the vein of E.T., brilliantly spirals down into unexpected darker territories. Director Joon-ho says he got the idea of Okja after imagining the visual of a big animal with mopey face. The misery and big size of the animal naturally took the director to deal with themes of G.M. (genetic modification). Director Bong Joon-ho realizes super pig Okja from the perspective of a caring family. Then there’s the other perspective: one which simply sees the animal as food. The film may sound like an unnuanced effort to display the ills of meat consumption. Bong’s characters and his design of chaotic social landscapes are more complex for such neatly packaged messages. Okja doesn’t make a plea to people to embrace veganism. In fact, Mija’s favorite food happens to be chicken stew. The movie’s intention is to once again insist on the disturbing food chain in capitalist society; to revise our inclination towards mindless consumerism. Moreover, it doesn’t want to dismiss the atmosphere of blood, excrement, fear, and death that’s behind every glittering package of sumptuous meat.

Although Bong Joon-ho uses the language of genre to deal with hefty social themes, he never turns the narrative into a war between evil vs good or shuns complexity to include few doses of didacticism. Despite the obvious nods to adventure genre, the characters’ morality resides in the grey area. In addition, the narrative events are an amalgamation of optimism and pessimism, which is a reflection of how our society operates. The director’s subtler character shades can be well observed in Lucy’s characterization. It was to Swinton & Joon-ho’s credit that Lucy isn’t turned into a cartoonish villain. The hidden motives and repressed feelings of Lucy gracefully rise to the surface of sweet, smiling face (especially in the ‘trailer’ scene before the starting of Superpig Festival). There’s always more to her than meets the eye. If Lucy represents the hypocrisy of so-called ‘kind capitalism’, her alternative – Nancy – is the more distressing version. She is the embodiment of ruthless corporate practices (‘Everything is edible, except the squeal’, says Nancy in the film’s most chilling moment). Jake Gyllenhaal’s Wilcox might be the film’s weakest character. Maybe due to Gyllenhaal’s overly broad performance or because the character doesn’t do much other than being eccentric. In contrast, even Steven Yeun’s character ‘K’ possesses an interesting moral arc. 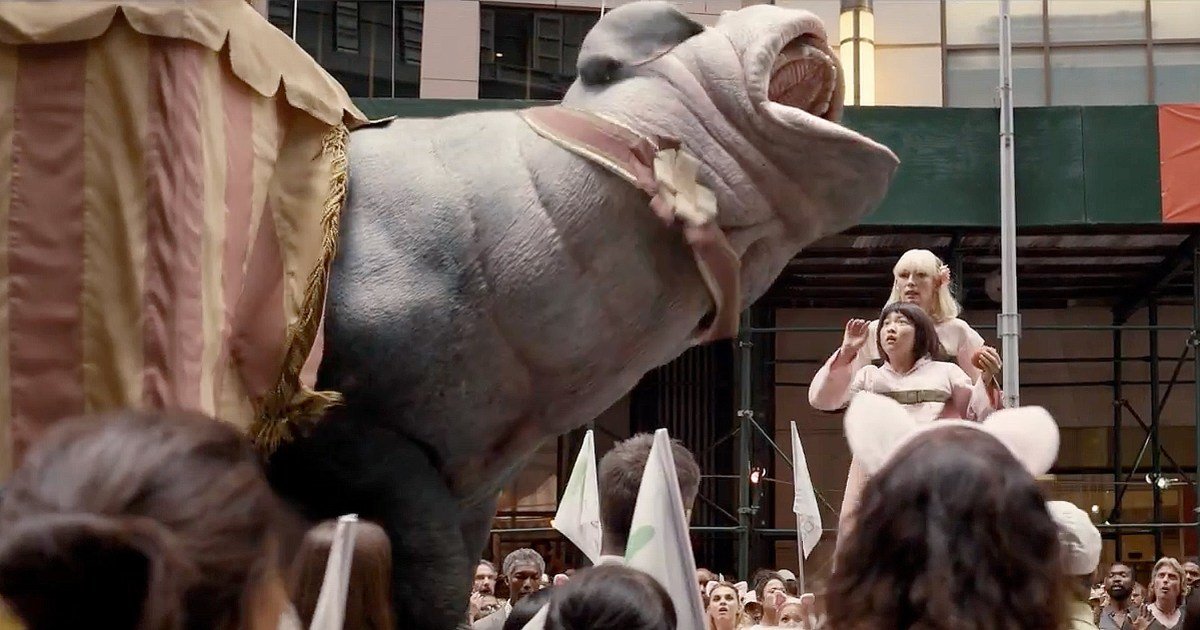 One of Okja’s delights is the director’s agility to move between different pace, tone and styles. Our empathy for the super pig and the girl is never lost amidst the thickness of sociopolitical, environmental concerns. The opening set of gently comic scenes eases us into the narrative, pushing us to buckle up for a wild ride, starting with pig chase in a busy Seoul shopping complex. The chase scene and the confrontation between ALF and company authorities lead to the film’s most exhilarating set-piece. Bong Joon-ho laces brilliant absurdist comedy into the life-or-death pursuit. Darius Khondji’s cinematography elegantly bounces between deep greens of the forest to flashy colors of corporate structures to the gloomy corners of the vast abattoir. The striking cut between the pastoral mountains and the sea of heads in Seoul subway entrance (Mija is distinctly identified by her red overcoat) is one of the examples of spectacular imagery. The ‘slaughterhouse’ scene was distressingly visualized, pushing us take the trip alongside the appalled Mija. Even though the final sweeping shot of crying pigs (a holocaust metaphor) seemed to forcefully drive-in the emotions, it’s so powerful to be imprinted in our memory.

Yet for all the environmental and political allusions, Okja works foremost as a touching tale of a smart girl and her beloved pet. Like every other coming-of-age tale, Mija tries to make sense of a dreadful world where bad things happen to gentle and good creatures. She learns that if money is at the root of this frightening atmosphere, it can also prevent some evils from happening. A film isn’t the perfect tool to change the world. But, films like Okja provides spectacular humane core to see what we already know in a different context. Okja (2017) may not make viewers turn away from the prospect of consuming pork chop. Nevertheless, by deftly blending genres, pathos and humor, the film offer a unique layered vision of a brutal world, driven by unbridled avarice and apathy.

Kotoko [2011]: A Vicarious Study of a Schizophrenic Paranoid Mother