Described by its creator as ‘a comedy without clowns, a tragedy without villains’, Parasite (2019) is a tale of two families, who although couldn’t be further apart from each other in terms of socio-economic status, are somehow a reflection of one another. The story revolves around the Kims, a family of con artists, who lie their way into the home of the rich Park family after their son is offered a job as an English tutor for their elder daughter. He proceeds to get his whole family employed in their home, without the owners getting to know of their familial connection. Everything seems perfect until they discover that they are not the only ones there and then it all goes haywire.

The film sheds light on & is a commentary on the underbelly of the modern capitalist world, where the rich become richer & the poor delve further into poverty with each passing day, all the while highlighting other issues such as climate change. Despite it being obvious, one can’t characterize any character in Parasite (2019) as being simply ‘good’ or ‘bad’, because all of them lie in the grey zone. If the Park family looks down at those beneath them on the social ladder, so does the Kim family; if the Park family is selfish in the most absolute sense of the word, so is the Kim family. In fact, you realize that you don’t empathize with the Kims due to their ‘goodness’ but simply because they are the underdog & because of their place in the power structure. Ki-woo’s wish of becoming rich and buying the Park family house makes you realize that you aren’t rooting for them to break the structure or change the system, but for them to simply ascend upwards and become the next Park family. This is what Bong Joon Ho wishes to highlight through this movie.

1. When he was in college, Bong Joon-ho worked as a tutor for the child of a rich couple in Seoul. This served as inspiration for the spine of the movie’s plot. Bong imagined how things would turn out if a private tutor like him turned out to be devious and tried to trick his friends into that house. He also mentioned how the child he tutored once showed him the sauna in their house & how it left him in awe. This made him include a sauna in the Park family’s home – a symbol of wealth. Funnily enough, Bong mentioned he was fired after two months because he spent most of the time talking rather than teaching.

2. The Landscape stone – an item that appears in the first scene & sets the tone for the rest of the movie, is an enigma. In an interview, Bong said, “No one gives those landscape stones as a gift anymore. Perhaps my mother, or really older generations, but it doesn’t make any sense that young people would exchange that. But I always feel it’s more fun when I try to convince the audience of something that doesn’t make sense.” That rock is assigned a very unique position. It’s a kind of obsession for Ki-woo. Throughout the film, he’s trying to imitate Min, his rich friend who initiated him into this world. Perhaps, it also signifies his hope for a better future for his family. It is a sort of tragic humor when that stone is what almost kills him – making it a paradox.

3. Some scenes & set designs have taken inspiration from ghost stories. For example, the flickering lights which Guense used, to communicate with the child are a classic motif of ghost tales (which Mr. Park always assumed were lit up by motion sensors). Moreover, the Production Designer modeled the Kim’s street off of ‘ghost towns’ in South Korea, which are worn & abandoned towns that are said to be haunted by the traces of people who lived there. The art department also visited abandoned homes that were soon-to-be demolished in order to collect props and materials for the film. Hence, the signboards and the material on the surface was scavenged and not built.

4. One of the most intricate and extraordinary ways used to illustrate the class difference & complex hierarchies in the story is Elevation. The many sets of staircases throughout the movie are a testimony to the socio-economic inequality between the rich and the poor. According to the Production Designer Lee Ha Jun, “the spaces in the film are compartmentalized and connected through a very complicated staircase.” Other subtle nuances of elevation are hidden in scenes where the characters have to descend to reach the poor family’s home and always ascend to reach the rich family’s home. The revelation of the man living in the basement also uses this technique, as the long take doesn’t seem to end while following Mrs. Kim down the stairs, further emphasizing the descent into poverty. Parasite shows how fine distinctions in class status only function to keep the poor at the bottom of the hierarchical structure in all societies & prevent them from ascending upwards.

5. Bong Joon Ho has also used sunlight as a way of highlighting the aforementioned distinctions. The premise is that the poorer you are, the less sunlight you receive. It was, therefore, significant for the movie to open at a fleeting moment of sunlight penetrating the Kim family’s semi-basement home. Interestingly, even though they don’t have direct access to sunlight like the Park’s, they aren’t deprived of it yet, which signifies a minute sense of hope for their success in the future.

6. The scene wherein Guen se appears on the staircase was not planned. Originally, it was supposed to be a reflection of a man in the window. But in the actual set design, the house was too big; the distance was too far—it would have been too awkward to create a reflection. So, the team decided to change their strategy. When Bon Joon Ho had a photo session with that actor and noticed that his eyes were so powerful, he knew he had to feature them in the film. Hence, he made it seem like a pair of binoculars coming up from a submarine. 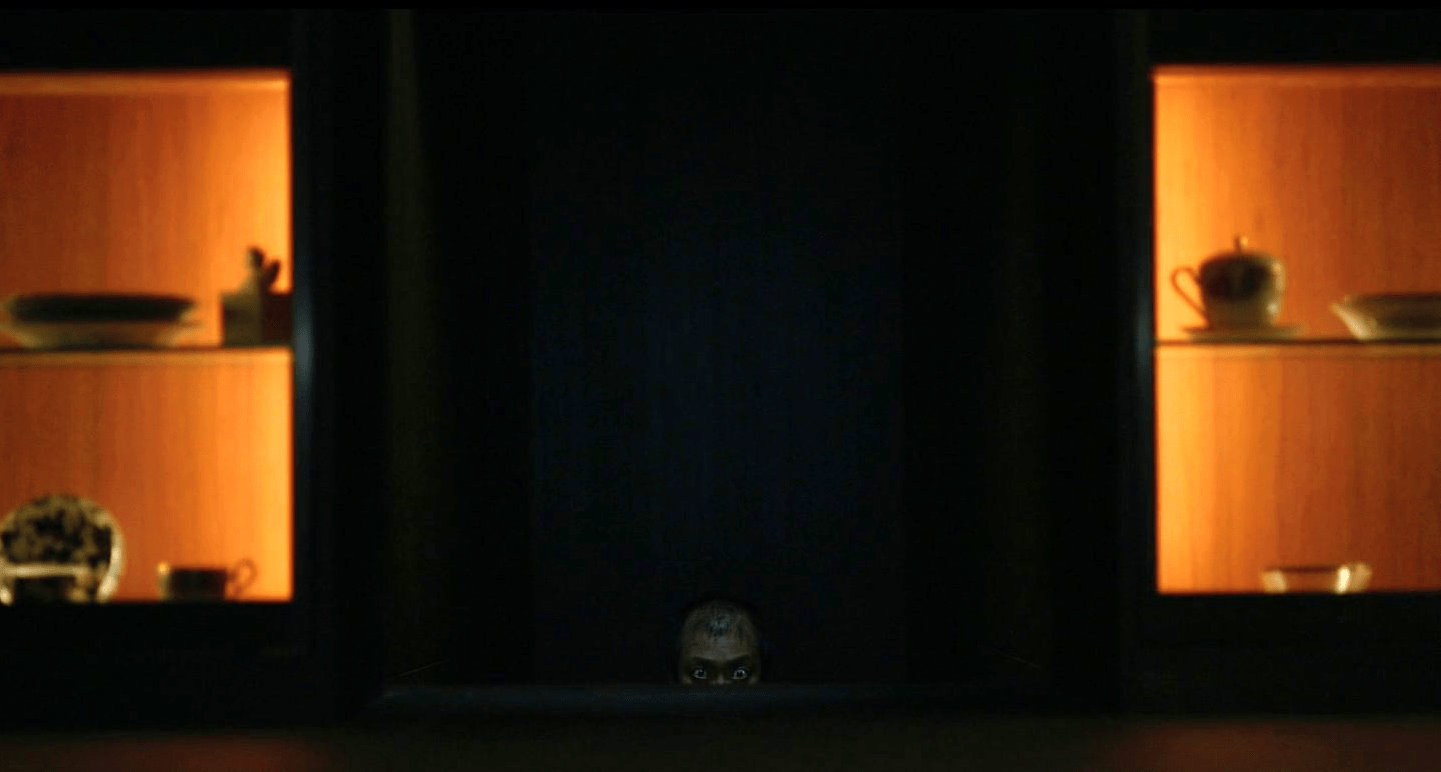 7. The Rain Scene – A little more-than-midway through Parasite (2019), the Kim family finds themselves at one of their most desperate moments when, after escaping the Parks family’s notice upon their early return, they come back to their modest home and discover that the whole complex has been flooded. In order to realize this moment in the film, Bong Joon-ho and his team had decided to build the apartments inside a giant water tank, thus making it easy for them to flood the whole neighborhood when it came time to do so in the film.

8. The movie reaches its climax at the garden party thrown for the Park family’s son’s birthday. This is the scene where all complex & strained relations appear conspicuously. It would be interesting to know that this scene is foreshadowed beforehand when Mrs. Park is modeling the table arrangements for the party. She wanted the birthday table arrangements to mimic Admiral Yi’s crane formation in defeating the Japanese navy–back in the Imjin Wars of 1592, which was Bong Joon Ho’s way of giving us a premonition of the violence to ensue.

9. Bong Joon Ho has remarked that the title would reflect the story better if it was ‘Parasites’ (plural) because, despite the extreme attention to detail and precise nature of the film, it is difficult to establish who actually is the Parasite. The Kim family – who were on their way in after stepping on the backs of another working-class family just like theirs, only to discover that there was already a parasite living in the basement and feeding off his hosts or was it the Park family? Perhaps the biggest parasite of them all is the Park family, since they leech off the labor and desperation of their workers, without giving anything back but the bare minimum for survival.

10. In the last scene of Parasite (2019), the camera tracks down to the semi-basement home the movie began with. Bong describes this scene as one which destroys all hopes that the audience had for better conditions of the Kim family. As the credits roll out, the song ‘A Glass of Soju’ plays in the background, sung by the actor Choi Woo-sik himself, with lyrics by Bong and composed by Jung Jae-Il. In the song, Ki-woo sings about how long he must work to earn enough money to buy the Park house. The song was originally supposed to be titled ‘564 years’, because according to Bong, realistically that’s how much time it would take for Ki-woo to earn enough money to buy that house, making it a dream which neither he nor his children can fulfill.

The Top 3 Online Slots in Canada