Rocketman (2019) is an amazing trip. A beautiful study of character. A lesson in how to do a biography. It is satisfactory in so many ways.

Instead of studying his personality from the outside in, Director Dexter Fletcher does the opposite. This intimate approach to present Elton John creates an instant impact within the first few minutes. To sustain this journey, he is aware of when one can dare with the conduction and composition of scenes. He can walk through the most different shooting styles.

His camera can capture all the feelings of the characters whether it is more fixed or with more conventional closed plans or sequential plans with movements and angulation of the most varied, is a flawless technical-creative work.

Lee Hall’s script mixes personality with extravagance (with a jerk from the director as well) to show all of Elton’s evolution. Even in moments filled with sex, drugs, and lots of music he focuses on how the character reacts to it.

The use of Elton’s career tunes to tell the story could fall into a cheap narrative feature, but it contributes to every aura and immersion of the film. It also develops certain characters that at first glance would seem one-dimensional. But when participating in the musical numbers, reveal a lot of content about themselves.

Hall sins in certain dialogues, which pass an apparent artificiality but overshadowed by the interpretations and edition. Narrative beats follow a formula of films of the genre (like Walk the Line), but within them, there are highlights about the development of characters. 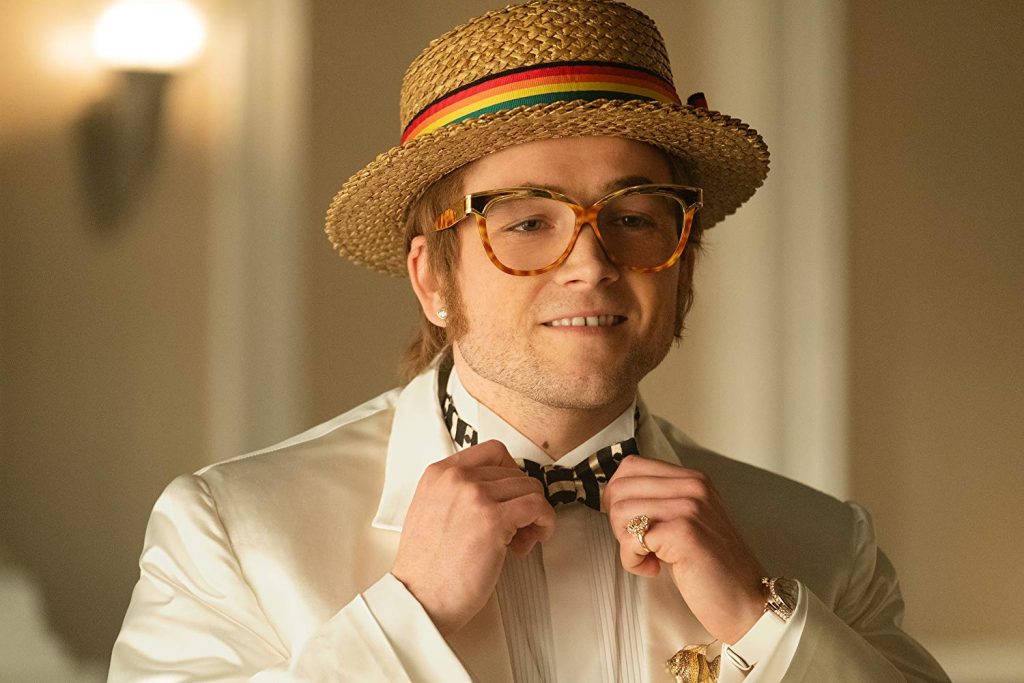 Taron Egerton presents us with a performance that immerses, with, his tricks and voice, the spectator in the work, he passes a very specific honesty of Elton in demonstrating what he feels. The whole cast of support is great (some suffer from the uni-dimensionality of the dialogues), emphasizes Jamie Bell and its maturity.

I have rarely seen a major studio film like Rocketman (2019) that combine photography and art so harmoniously. The use of lights – particularly isolated ones – and filters – for vibrant colors – with extravagant and detailed costumes – and well-distributed settings – create a sometimes dreamy, delicate, and almost wild, but sometimes intimate and simple journey.

Colors encompass these two areas and unite them for different functions, degradation of the human being along with gradual madness, the explosion of feelings and sensations, hope with pessimism, cleansing of the soul, peace with oneself, and more dozens of joint color use which are nothing short of exceptional.

Related Read: Lack Of Musicals At The Golden Globe

In a way, the direction, photography, and artwork resemble La La Land, but in a more stale way, something that would navigate in a more pop Gaspar Noé.

There is a clear and wonderful consensus between direction and editing. The cuts and transitions are a reflection of Elton’s mind, there is agility between the connection of the scenes that unites all the pieces of the composition, and never rushes them. All musical sequences and scenes, in general, are stitched together with the correct team.

Rocketman (2019) is an excellent biography that should be lauded for its originality and courage to show the life of one of the greatest artists in history, but with a creative and technical vision.