‘Saand ki Aankh‘ (Bullseye) is inspired by the real-life stories of the Tomar sisters-in-law i.e. Prakashi Tomar and Chandro Tomar. It focuses on the journey of these sexagenarians as they make a name for themselves in the seniors’ shooting circles and earn the moniker of ‘the shooter dadis.’ They do this whilst battling existing archaic prejudices and amusingly use a few of them to their advantage.

Prakashi Tomar and Sakshi Tomar are played by actresses who are not even half their age. Tapsee Pannu is Prakashi and Bhumi Pednekar is Chandro. They live an insignificant life within a north Indian village. The duo is shown as the ones who work hard in the fields and at their home all while watching their lives pass by. Any attempt of theirs to do something for themselves is looked down upon by the highly traditional archaic patriarchal head of the household Rattan Singh (played by Prakash Jha). There always has to be someone like this in such a movie.

The state in which they live their life gave me a vivid picture of the loincloth clad Egyptian slaves who would haul a huge block whilst a watcher flicked a whip through the air.

When a shooting gallery is built in their village their granddaughters wish to attend sessions, the duo realizes that the only way it will be possible if they chaperone the kids to the location. They face ridicule their entire lives and are the object of mockery. This very mockery is what fuels them as they go and hit bullseye after bullseye. 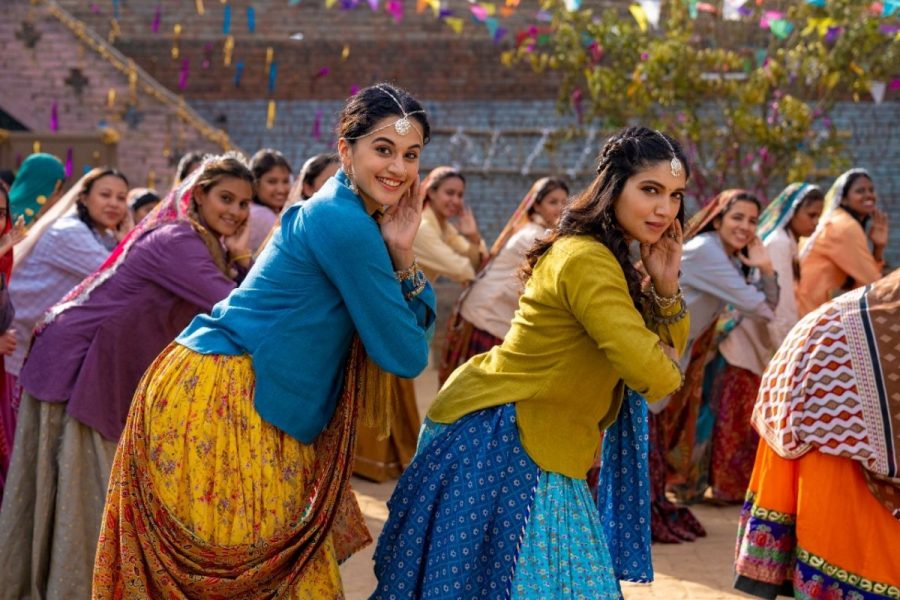 Directed by Tushar Hiranandani, this film seamlessly transports us into a universe where it is shocking to see a woman achieve any semblance of success. The norm for her to exist as the men in her family see fit. “In my house girls will walk the road that leads to their husband’s house” are the words of Rattan Singh Tomar when he is coerced into relenting on his stance prohibiting the young girls to attend shooting sessions at the range. He also has the line, “guns look good in the hands of men” and the highly amusing and as the film progresses, repetitive line of, “ye toh hona hi tha.”

This is a line I said to myself as we go on the expected rise of the protagonists from a subdued life, to their highs and then eventual discovery and the usual ending in Bollywood films. (Can you name sad endings which have released at around festivals?)

What surprised me was that these turns took place way after what was usually expected and just for a few minutes I believed that we finally had a film that ditched the formula. I believed it as this film in its subject matter, choice of protagonist and its casting had already done so. It is rare to see a film with two women protagonists, and a film with two female sexagenarians being the lead characters is quite an anomaly in Bollywood.

The character of Rattan Singh aged well, however, the same can’t be said about the characters of the Tomar sisters-in-law. They only have white hair as they grow older and are a tad plump from their flashback scenes, but there aren’t many wrinkles or things that suggest they are in their 60’s. Their voices, mannerisms, and gait do make up for the deficiencies in the makeup but that faulty makeup continuously brings to our mind that Tapsee and Bhumi are in their late 20s/early30s

The film has its light-hearted moments laced with innocence by the antics of the Tomar sisters. They squeeze a lemon into the washing bowl and proceed to drink the water. They seem a bit too adventurous. Usually, when a person is tentative they watch what the other person does before imitating them. This innocence can be seen by some as an unnecessary mockery to portray a culture gap. But this very nature of theirs helped them rise above their situation and is an apt reflection by the reel characters of these real-life people.

There are scenes where they are struggling to speak and use broken English. It’s curious regarding the fact that the grannies were permitted to learn a foreign language by their rigid husbands. They also seem to learn big words quite fast. In the early part of the film, I was shocked to hear Chandro translate one particularly large English word to Prakashi.

The writers keep the English education an off-screen development which is good for it would’ve bloated the films already long run time.

The excess Bollywoodization makes the narrative compelling to the general entertainment seeking audience. The dialogues and the rebellious (concerning the setting of the film) nature of the dadis, see the film pander to a festive period audience.

The last 45 minutes could have been edited a bit more. A few scenes there are powerful and could have been added somewhere in between. I especially loved the scene where the duo walks before a flaming field. This is a visual representation of their struggle as well as that of their female family members.

Saand ki Aankh’s theatrical release poster has the tagline ‘Tann Buddha Hota Hai, Mann buddha nahi hota’ (the body gets old, the mind doesn’t). In addition to being a film about women empowerment (unfortunately this message is put across through commercially motivated applause and chuckle-inducing lines), it is an ode to old people being able to live their lives and achieve their dreams or help others achieve their dreams.

Largely, ‘Saand Ki Aankh’ hits the bullseye. Despite it being entertaining it does miss the mark in a few departments which is quite a shame.