I have come across cinephiles and critics alike disregarding certain socially conscious films, bellyaching over its technical shortcomings or evaluating its strictly partisan narrative as a mere agitprop. Herbert J. Biberman’s Salt of the Earth (1954) – a cinematic statement of resistance against the powers that be – is one such film, whose progressive sensibilities and eloquent narrative have faced vitriolic criticism over the years. Audaciously made during the middle of HUAC witch-hunt by a blacklisted crew of artists, Salt of the Earth dramatizes the 1951-52 Mexican-American miners’ strike for wage justice and safe working conditions at a New Mexico zinc mine. Apart from the director Herbert Biberman, the film’s screenwriter Michael Wilson, producer Paul Jarrico, and composer Sol Kaplan were all blacklisted by HUAC (House Un-American Activities Committee). They responded by making a radical film that gave voice to the oppressed, marginalized workers.

Lengthy articles have been written on how the whole American establishment came together to stop the film’s production, and eventually its release and distribution. As the Film Inquiry’s column emphasizes, “Salt of the Earth remains the only film in American history where each stage of production and distribution was upturned and impeded by almost every level of government and police enforcement in the country” [1]. From being declared as a subversive film in the Congress to Hollywood Reporter’s scathing hearsay that, “it was made under the direct orders of the Kremlin”, this expression of left-leaning political views has scared the paranoid 1950s white America. 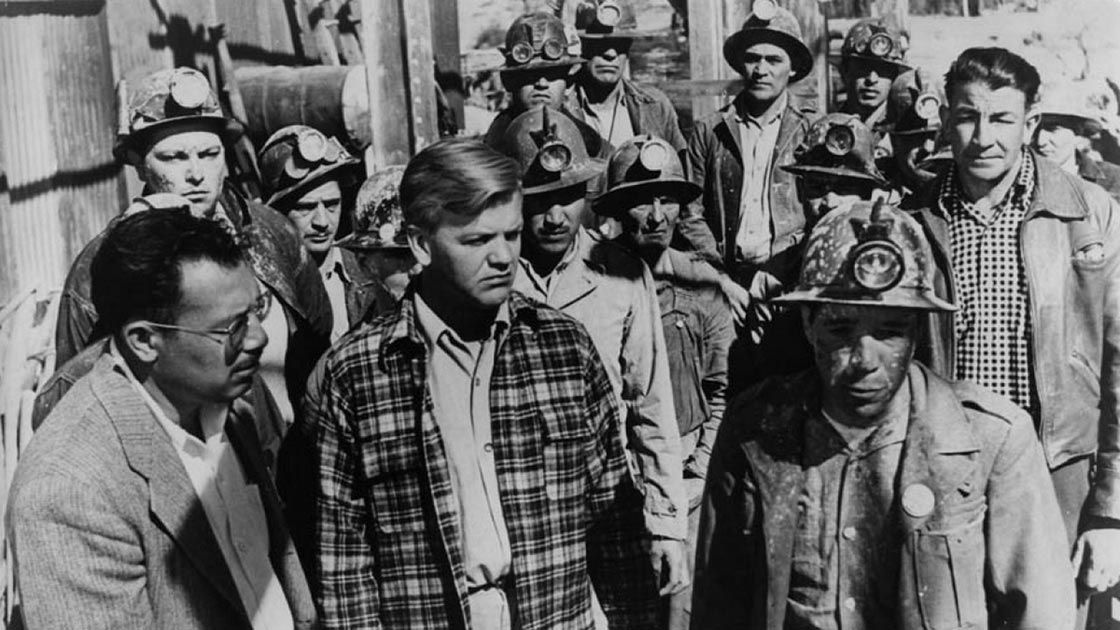 By the mid-1960s and 70s, Salt of the Earth found its audience and gradually gained a cult status. Still the film’s pressing political concerns – from women’s liberation, racism to class inequalities – continued to be reduced as ‘pro-communist’. Andrew Sarris, an influential American critic in his 1963 review of the film wrote, “The fact remains that the film is simply ludicrous… it’s basic ideas are declaimed repeatedly with Sunday school elocution”, and then goes on to declared that it doesn’t have the “intense realism of Stroheim or a Bunuel” [2]. Critics like Mr. Sarris often cry over an artists ‘taking sides’, but when a difference of opinion or beliefs is tramped down by the all-powerful State, cinema naturally ascends to provide voice to the collective will of oppressed people. What’s actually ludicrous are such gatekeepers of cinema.

Related to Salt of the Earth: Matewan [1987] Review – A Powerful Look at Labor Issues in Industrial America

I apologize if all this makes Salt of the Earth sound like a pedantic docudrama that offers no delight to the viewers. The film does explicitly dramatize the different layers of conflicts and struggles within the mining community. However, there’s a powerful lyricism in the narrative that easily outshines the few didactic passages. More than six-and-half decades later, Salt of the Earth still remains very relevant and withholds the emotional force to engage and rouse us. Narratives dealing with poverty and suffering will completely set aside the humor that permeates one’s daily life. We humans do have something to laugh about even during a grim phase. Biberman and writer Wilson’s approach is decidedly humane that they use humor to not only lighten up the proceedings, but also to convey important social concerns; for instance, the ‘women question’ scene adds to the pleasure of watching this film.

Salt of the Earth was made with the support of International Union of Mine, Mill and Smelter Workers. The extras and supporting cast were from the New Mexican chapter (Local 890) of the Union. In fact, Ramon Quintero, who spearheads the strike against ‘Delaware Zinc Inc.’ was played by Juan Chacon. He was the president of the union and other key character ‘Frank Barnes’ was also performed by a union representative. Biberman mentions that he actively collaborated with the local workers (in a book he published in 1965) to get the depiction close to reality, instead of peddling the usual Hispanic stereotypes. The idea of Mexican-Americans being played by a Mexican-American cast itself sounds very radical (in American cinema). The narrative unfolds from the perspective of Esperanza Quintero, played by Rosaura Revueltas, who is a professional actor in Mexico. Salt of the Earth was her only American film. Before the film’s completion, she was arrested by immigration officials on an alleged passport violation and deported to Mexico (one among the many tactics to stop the shooting).

Salt of the Earth opens with the voice-over of Esperanza who is pregnant with her third child and feels dejected in bringing another child of hers into this world. The film’s dominant theme of women emancipation is emphasized in the film’s opening lyrical scene that captures Esperanza toiling amidst the atmospheric New Mexico landscape.  She gives an overview on the current plight of New Mexico Zinc miners (“our roots go deep in this place, deeper than the pines, deeper than the mine shaft”). And further states her own trapped status because of the gender role forced upon her. Esperanza’s husband Ramon Quintero rightly points out the issue of inequality in wages as Anglo miners are paid more than the Mexican-Americans. He calls for solidarity to destabilize the power elite. But sexual equality is a remote concept to him, and the miners’ wives don’t have a say or a place in the union meetings.

Though the desire for liberation boils within Esperanza, when a group of miners’ wives ask her to sign a petition for better living conditions (particularly plumbing), she hesitates signing without her husband’s approval. Soon, an accident occurs in the mine due to inhumane working conditions. This becomes a catalyst for workers uniting together for a strike. The dramatic moment that happens before the declaration of strike is efficiently staged with row of weary workers, silently and stoically facing the dictatorial manager. The striking miners unanimously join the picket line and thwart almost all the attempts to break the strike. But a local Judge in an order favoring the company evokes Taft-Hartley Injunction which gives the state the power to imprison the picketing miners. Ramon admits that it’s a defeat whether they go back to work or continue to strike. Nevertheless, he prefers picketing over surrendering to the company. 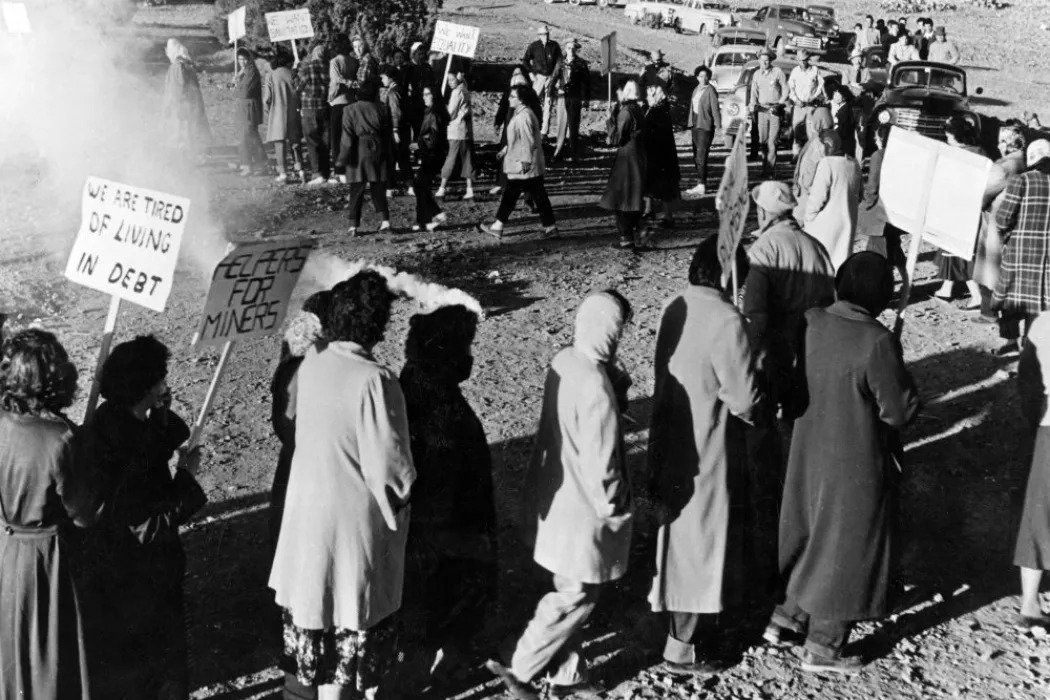 The women, attending the union meeting, however bring to attention that the injunction only prohibits miners from picketing. The miners’ wives offer to take over the picketing duty which naturally becomes a contentious issue among the miners. As Esperanza has gradually gained confidence to assert herself, Ramon only scoffs at the idea of women picketing and facing the company bullies. Nevertheless, the women take up the picketing duties, and the men – both the authorities and skeptical miners – undermine their ability to stand for the cause. The liberated women’s activism not only dismantles the convictions of powers that be, but also brilliantly questions the politics behind domestic chores. Though women stand as an ally to the strikers, some consider it as a threat to their male identity including Ramon.  In one of the film’s most powerful scenes when Ramon angrily confronts Esperanza about this, she poignantly retorts, “Whose neck shall I stand on to make me feel superior? And what will I get out of it? I don’t want anything lower than I am. I am low enough already. I want to rise. And push everything up with me as I go.”

Also Read: The 15 Best Movies About the Working Class

Salt of the Earth is powerful and timeless because it isn’t simply dealing with the hierarchy of marginalized. It goes further to point out the hierarchy existing within the marginalized. Biberman and Wilson insist that social justice and equality should primarily exist in our own domestic space before we sloganeer and march for it in the public.  In fact, that’s not very radical, but only humane although it still remains a scary notion to many.

The first time I heard about Salt of the Earth was while reading Noam Chomsky’s book. From the little I have read of Chomsky, it’s the only time I saw him talking about a film. He says, “I thought that it was one of the really great movies — and of course it was killed.” What’s more intriguing about this passage in the book is how he equates the disapproval Salt of the Earth received with the emphatic success of Elia Kazan’s On the Waterfront:

“Salt of the Earth came out at the same time as On the Waterfront, which is a rotten movie. And On the Waterfront became a huge hit — because it was anti-union. See, On the Waterfront was part of a big campaign to destroy unions….. It’s about somebody standing up for the poor working man against the corrupt union boss. Okay, things like that exist, but that’s not unions — I mean, sure, there are plenty of union bosses who are crooked, but nowhere near as many as C.E.O.s who are crooked, or what have you. But since On the Waterfront combined that anti-union message with “standing up for the poor working man,” it became a huge hit. On the other hand, Salt of the Earth, which was an authentic and I thought very well-done story about a strike and the people involved in it, that was just flat killed” [3].

John Gianvito, an independent American film director, has also made similar comparisons, further citing the infamy of Elia Kazan, who named names in his 1952 HUAC testimony. The ill repute followed him throughout his life, even when Kazan accepted Lifetime Achievement Oscar in 1999. Many A-list Hollywood celebrities refused to stand or clap for the director during the award ceremony. Eliza Kazan is undoubtedly a master filmmaker. On the Waterfront is one of the best in his, and Marlon Brando’s career. Yet its unmistakably corrosive message at that time can’t be easily dismissed.  Just as Salt of the Earth is a film about solidarity and hope, such critiques also give us the same feelings. Now both the eight Oscar-award winning Hollywood product as well as the once-banned film is out there for us to be watched and perceived.