Jim Jarmusch’s sophomore feature Stranger Than Paradise (1984) has sixty-seven shots – mostly long static shots filmed with live sound – punctuated by fade in and fade outs and divided into three distinct parts (although unlike the traditional three-part Hollywood structure Jarmusch’s vision offers idiosyncratic non-narrative cinema dripping with deadpan irony). Shot in black-and-white on a budget of $120,000, the ‘little’ indie film went on to win Camera d’Or award at the Cannes Film Festival and a Special Jury Prize in the inaugural Sundance Film Festival. In 2002, Stranger Than Paradise was selected for inclusion in the Library of Congress National Film Registry. The poetic artfulness with which Jim Jarmusch visualized humdrum existence in the urban wastelands of America not only marked the emergence of a singular film-maker, but also marked the beginning of a new independent film movement in American cinema. Moreover, the film-makers of eighties independents, including Jarmusch, Spike Lee, David Lynch, John Sayles, Joel and Ethan Coen, were fiercely autonomous and striven for complete creative control.

Jim Jarmusch, like his predecessors Yasujiro Ozu, Robert Bresson, John Cassavettes, and his contemporaries Wim Wenders and Aki Kaurismaki crafts poetry out of the mundane and avoids fatalistic action to boost the dramatics. The evocative sparseness or the impressionable spartan quality found in Jarmusch’s works may not appeal to all. But I’m bewitched by his allegedly unambitious oddball characters (adequately exuding bone-dry humor) tackling alienation, loneliness, and the absurdity of life.  Mr. Jarmusch’s first attempt at film-making was Permanent Vacation (1980), a 70 minute film about a young man with zero responsibility or ambitions. It was his thesis film for NYU (where he was classmates with Spike Lee) made on $15,000. 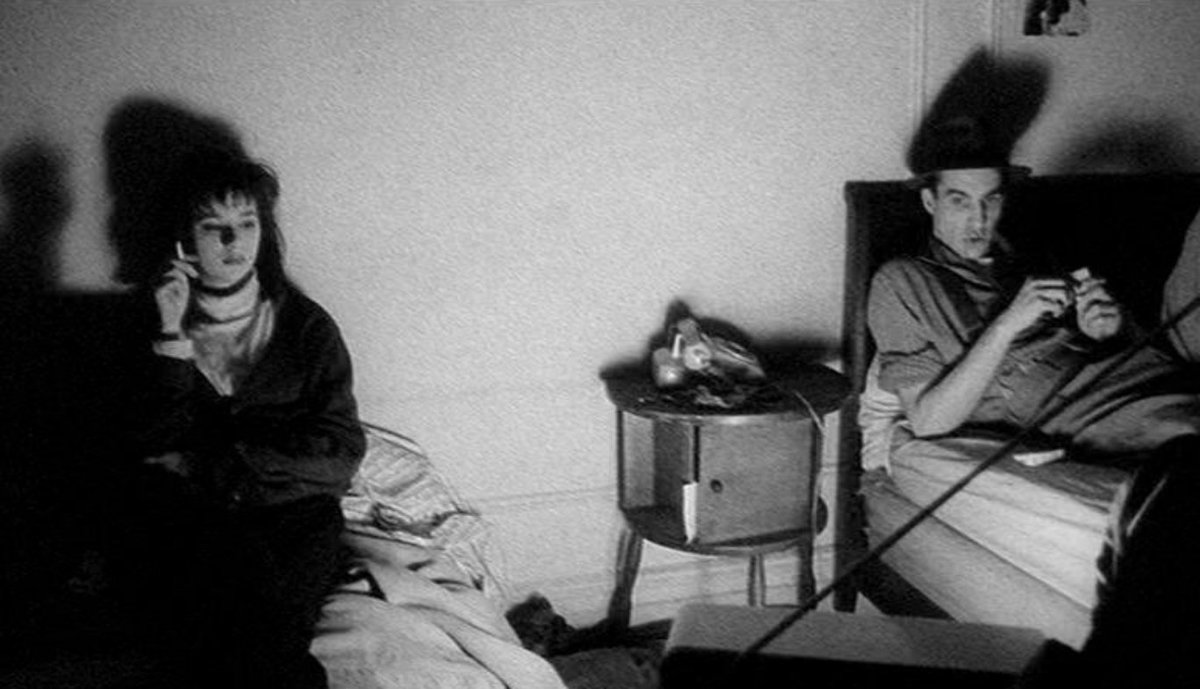 Naturally, Jarmusch’s professors were unhappy, and it didn’t have much exposure in the US. But Permanent Vacation got the attention of Chris Sievernich, executive producer of Wim Wenders who gave Jarmusch raw black-and-white film stock. It pushed the film-maker to team-up with his multi-talented friend John Lurie to make a 30-minute movie in 1982. While editing the short, Jarmusch felt it could be expanded into a feature-film and he also wrote a script. It took another year to raise the funds to make the two additional chapters and attach it to the original 30-minute segment. The stripped-down style of Jim Jarmusch is pretty evident in the simple black title card that spells out the movie’s name and goes on to identify the particular segment as ‘New World’.

In a long shot we see a young woman dressed in black, holding a suitcase in one hand and a bag in the other, standing in a wasteland overlooking the airstrip. The sound of jet noise accompanies this shot. A lanky man wearing a fedora hat living in a broken-down flat answers a telephone call. He is asked to babysit his cousin Eva (Eszter Balint) for 10 days, who is fresh off the plane from Budapest, Hungary. Eva will eventually move to Aunt Lotte’s (Cecillia Stark) house in Cleveland, the aunt who is now recovering from an illness at a hospital. The young man calls himself Willie (John Lurie) and repeatedly requests his aunt to not speak in Hungarian. At one point, he protests, “It’s disrupting my whole life”. But there’s not much happening in Willie’s life apart from going to horse races, playing poker, enjoying TV dinner, and drinking. And although a fish-out-of-water, it doesn’t much time for Eva to settle down. She walks through the grey, depressing urban wastelands of New York, playing a Screamin’ Jay Hawkins song, and taking the sights of a burn-down gas station bearing the sign ‘Quality You Can Trust’, and a graffiti that reads (or screams): “U.S. out of everywhere! Go home!”

Eva spends her days cooped-up in the joyless, cramped apartment smoking Chesterfields, while her aloof, Americanized cousin watches baseball, and hangs out with his sweet yet dim pal, Eddie (Richard Edson). Some kind of platonic affection develops between the two only when Eva steals packaged food and cigarettes from a nearby store. In her punkish, unruly nature, Willie finds a kindred spirit. He gifts her a floral print dress, even though Eva is comfortable wearing her sweater and slacks. Right by the time Eva wins Willie’s awkwardly expressed affection, it’s the time for her leave New York and move to aunt’s house in Cleveland. In the next segment that unfolds a year later, Willie and Eddie scam some guys in a poker game. Flush with petty cash, they both borrow a car and plan to pay Eva a surprise visit. At Cleveland, Eva lives with ailing yet tenacious aunt Lotte and stuck in a job at a hotdog shop.

The trio goes to see the beautiful Lake Erie, which unfortunately is in a frozen state. At one point in the narrative, gazing at the white expanse of nothingness, Eddie comments, “You know, it’s funny….you come to someplace new, and everything looks just the same.” Willie spontaneously suggests to his friend that they go to a warmer place like Florida, and to take Eva with them. Eva jumps at the chance to escape from the routine. In this third and final segment titled “Paradise”, the trio despite possessing the dreams of slacking in the sunny beaches, face the same flatness and mundanity. The sameness of the stores and the drabness of the low-priced motels seem to say how in America if you don’t have lot of money even travel can’t amend one’s existential ennui. Nevertheless, Jarmusch prioritizes the lyrical observation of his characters’ deadpan behavior rather than commit himself to a specific commentary on the ‘American Dream’. 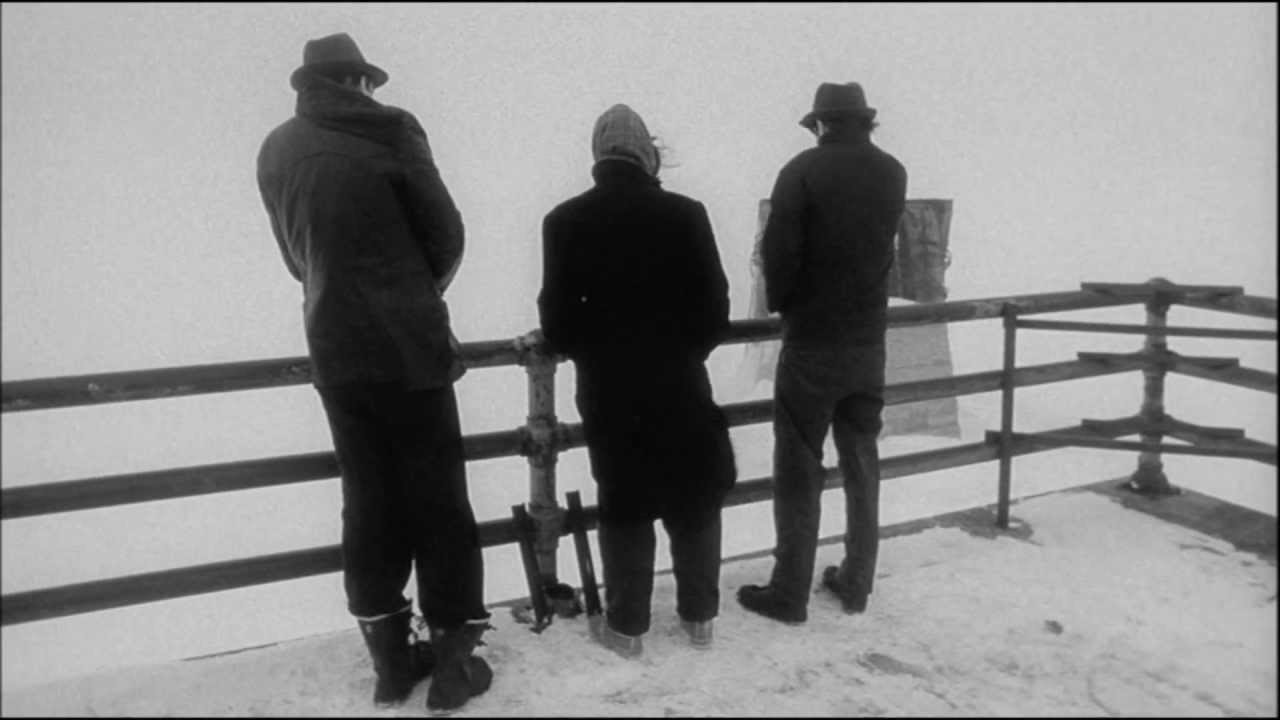 What burns through the film-maker’s collection of images exuding the feeling of homogeneity is his love for his eccentric, alienated characters. Despite the documentary-like mise-en-scene that employs distancing effects, the three central characters in Stranger Than Paradise gradually captivates the viewer. They seem to have the freedom to nothing, but not the opportunity to do something. Or may be, they feel uncomfortable to be trapped in the notions of ambition and paradise (in an interview to filmcomment.com, Jarmusch said, “…I’m not really interested in characters obsessed with some kind of ambition. That kind of American dream thing is just not really interesting”). Willie’s clumsiness to even recount a simple joke, Eddie’s amusing inflection, and Eva’ even-toned dialogue delivery all adds to the narrative’s charm, and further brings us under the umbrella of their shared alienation.

As a film-maker, Jarmusch succeeds (like Ozu or Bresson) in weaving something stylistically unique from the sameness or repetition of the images. Roger Ebert superbly describes this quality of Jarmusch in his 4-star review of Stranger Than Paradise: “It is like no other film you’ve seen, and yet you feel right at home in it. It seems to be going nowhere and knows every step it wants to make. It is a constant, almost kaleidoscopic experience of discovery, and we try to figure out what the film is up to and it just keeps moving steadfastly ahead, fade in, fade out, fade in, fade out, making a mountain out of a molehill.” More than three decades later, Jarmusch’s first mature filmic expression still resonates with us because it makes us feel something that couldn’t be displaced by time.

The crux of this understated indie gem might be a goal-less road trip, but Jim Jarmusch knew what exactly he wanted to do after the critical success of Stranger Than Paradise. From then on, he has made a neo-noir comedy, an atypical western, a crime drama, a road movie, and even a vampire flick. Yet he has never eschewed his idiosyncratic, hipster aesthetics for a place in the American commercial movie-making. To cineastes who don’t tune into the wavelength of Jim Jarmusch, I could only say what Eva says to Willie when she hears his complaint about the music of Screamin’ Jay Hawkins: “He’s a wild man so bug off!”

Ghosts of Mars [2001] Review: Could Have Been Worse