You will not read the name “Bidzina Ivanishvili” in the synopsis for this film – Taming the Garden- on the most popular sites. However, the name reverberates throughout the film. He is the former prime minister of Georgia, from October 2012 to November 2013, and a capitalist, also ranked as the richest person in the country as of 2012. Taming the Garden is an angry film in the most unassuming of ways. It is mundane in the process it exhibits as if a speechless observer is looking at an act of atrocity in a state of paralysis but awareness. It tries to make no attempt at providing a certain narrative to the events as if the truth being witnessed is so obvious and plain that it cannot be interpreted in two ways. It actually is.

You might try to assign a window of understanding citing the existence of nuance to every truth in the world but regardless of the nuanced features of this truth, it all boils down to the shameless display of power by one man over a community. A phenomenon that has a prevalence, and equivalences across the globe. A phenomenon that is cruel, agonizing and offensive to the dignity of not just a person or community but an entire social class.

Bidzina Ivanishvili is building a private garden. Therefore, trees are being bought and transported from the coast of the Republic of Georgia to his property. Salomé Jashi is bearing witness to this display of muscle. He is recording it so that it becomes a rigid chapter in the book of history, for people to be reminded of their futility. A peculiar fact lies in the exquisite nature of the cinematographic work done here.

Also, Read: Borderlands [2021] Review – A Compellingly Observed Documentary About The Edges Of The Country And Its People

For a film that is fiercely political, it is visually magnificent as well. One part of it depends on the beauty of the locations but the compositions are no less meticulous. Numerous frames are divided to accommodate eroding nature against expanding urbanity, which renders them with a degree of tension. Another essential characteristic that I would mention is how the erosion of nature is attached to an uncomfortable silence as against the vexatious noise of violent humanity. It is almost as if every frame is of dual acoustic characteristics. The stillness of trees occupying the same frame as the chaos of machines acting upon them. Yet, the low angle shots with which trees are captured only emphasize their authority in the circle of life. 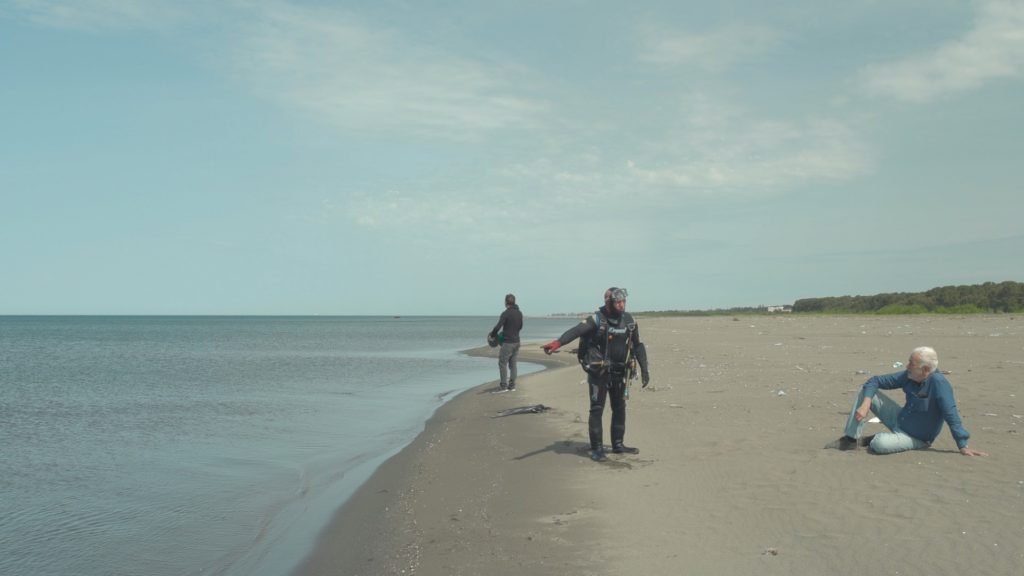 When the machines provide trees with faux mobility, Salomé Jashi captures the environment around from the point of view of the moving object to manifest the sentience of trees into conscious observations as if trees are bidding farewell, leaving their remnants in the form of falling leaves or branches, or calling out for help to not be taken away. Uniquely enough, as the owners of the trees mourn at their deracination and transfer, it is felt that the trees are equally mournful.

In one particular sequence of the nighttime, the transfer is being carried out through a narrow road with trees on both sides. The branches of the uprooted trees are in a tussle with the branches of the trees on either side, clutching onto them as if to resist a change thwarted upon them against their will. The morning is silent and the broken branches are being collected by two men on a cart, perhaps to be sold in one form or another. Men collecting what fell on Earth after a storm, a storm called upon by a man who has appropriated a position above them.

The brazen class divide and the insurmountable wall of separation is not an exclusive thing to perceive or interpret, and it is not a new thing to be commented upon by media, but the reminder of its omnipresence never fails to work as a trigger. Especially when it is being widened by the same people who promise its mitigation. With each passing time period, Marx’s utterance of an eventual truth takes a step closer towards becoming a dream, and power becomes increasingly concentrated.

The film closes to a sequence of the private garden, an artificial paradise with captive trees of diverse origin provided with modern care. They are now the decoration for a capitalist, stripped of their agency. For once they stood in communities that told their stories. Communities of people that planted a few, grew up with few. Trees that once had dignity, reflected through the stories told for/about them. Now they stand where no stories will form. They stand devoid of their individualism, despite their identity markers. We have violated a system that has preserved us, and if Taming the Garden could be treated as a synecdoche for human evolution, you would realize why our present reality is only the least ugly form of the future to come.

Munich - The Edge of War [2022] 'Netflix' Review: Yet another plea to Oppose Fascism before its too Late