The Boys: Diabolical, a spin-off of sorts from the original series, consists of 10-to-12-minute shorts. Some of them are canon and some of them are not. The episodes feature the directorial efforts of Giancarlo Volpe, Steve Ahn, Matthew Bordenave, Crystal Chesney, Madeleine Flores, Naz Ghodrati-Azadi, Jae H. Kim, Parker Simmons, and Derek Lee Thompson. They are written by Garth Ennis himself, Awkwafina, Ben Bayouth, Eliot Glazer, Ilana Glazer, Evan Goldberg, Simon Racioppa, Seth Rogen, Justin Roiland, Andy Samberg, and Aisha Tyler. The voice cast is filled with talented actors that you’re familiar with. But only Antony Starr, Simon Pegg, Elisabeth Shue, Giancarlo Esposito, Chace Crawford, and Colby Minifie are the ones from the original show who reprise their roles. And as mentioned before, since it is anthological, we’ll be going through each short one by one.

The first episode, “Laser Baby’s Day Out” features the baby that shoots lasers with her eyes. The animation style is reminiscent of the 1990-2000s era of Looney Tunes (something that the show explicitly references as well). And the plot is almost like Baby’s Day Out (1994), with one gag ripped straight out of the movie, where the laser-shooting baby escapes Vought International with the help of an employee who works there. But now they’ve to save themselves from being killed since the baby is Vought’s property. It’s kinetic, it looks brilliant, and there’s a certain level of charm to it. Which is oddly enough balanced out beautifully by the cartoonish carnage. As in you don’t feel the weight of the blood, the guts, and the bones flying around everywhere and that’s exactly why it seems funny. 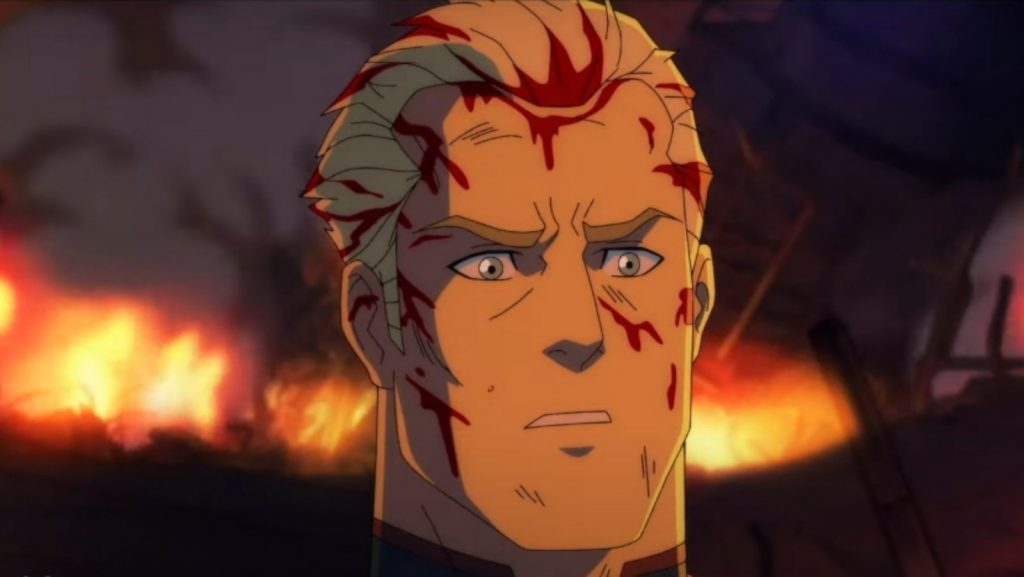 “An Animated Short Where Pissed-Off Supes Kill Their Parents” is quite self-explanatory. So, there’s no need to spell out the plot. It’s co-written by Justin Roiland. So, it’s animated exactly like the show he’s famous for i.e. Rick and Morty (2013-ongoing). And the similarities in terms of animation are so close (as in the eyes, the character designs, and of course Roiland’s now-iconic line deliveries) that you can say that this is an episode that Rick and Morty are watching on the Interdimensional Cable. Apart from the hilarious revenge plot, it’s mind-blowing to see how this show can house the most bizarre superpowers without blinking an eye. There’s a guy in here who can melt anything with his testicles and a guy with breasts as eyes. The most normal character is the protagonist who’s a ghost.

If you’ve never laid eyes upon Darick Robertson’s illustration for The Boys comics, “I’m Your Pusher” will kind of give you an idea of what it looks like. This episode sees Butcher (Jason Isaacs) use the Supes’ trusted dealer to send drugs that are spiked with a little special something to the Great White Wonder (Michael Cera). Because simply killing a Supe is boring. But getting him killed in front of an audience is better. According to Butcher, BTW. That’s not a personal opinion. In addition to the disturbing plot details and visuals, the most awesome thing about this episode is that Simon Pegg gets to play/voice Hughie. Pegg was the inspiration for Hughie in the comics. He was then cast as Hughie’s (Jack Quaid) father in the live-action series. And now, here he is playing Hughie. It feels good when things come full circle, doesn’t it?

“Boyd in 3D” is probably the first episode in this anthology that tries to send a message through its bizarre narrative. The story follows Boyd (Eliot Glazer) who is in love with his neighbour Cherry (Nasim Pedrad) but doesn’t know how to approach her because he’s insecure about his looks. He is “luckily” contacted by Vought to try an experimental facial cream that’ll allow the user to look exactly how they imagine they should look. He manages to woo Cherry. But then Cherry gets her hands on the cream too, thereby sending their relationship into a downward spiral. And through it all, the episode comments about internet culture and defining your relationship and image according to what your online audience expects. Talking about the internet, the furry community is going to love this episode. That said, the animation is gorgeous, and it has a hand-drawn quality to it. It almost feels like a risque Disney-Pixar short until it doesn’t.

Related to The Boys: Diabolical – All Oscar-winning Animated Movies Ranked

“BFFS” is astonishingly disgusting and heart-warmingly adorable at the same time. It’s centred around Sky (Awkwafina) who gets her hands on Compound V while trying to get drugs for her friends. While Sky’s friends aren’t interested in it, she casually ingests it and poops out a sentient turd. Yes, an actual, living, breathing, piece of shit. Of course, they become good friends. But Vought and The Deep (Chace Crawford) get in between them, thereby forcing Sky to harness her true powers. It’s basically a Kodomo style anime that just happens to take place in the world of The Boys. If you’ve seen anything between Beyblade Season 1 (2001) and the original Pokémon animated series (1997-2002), then you have watched a Kodomo style anime. And here you get to see another, more modern take on it. The cherry on top would’ve been the characters being voiced in Japanese instead of some random Japanese phrases being thrown around here and there.

Plot-wise, “Nubian vs Nubian” is probably the flimsiest out of the lot. It sees the daughter of the titular supes try to rekindle the love between her parents by making them fight with their arch-nemesis since that’s what gets them going. However, the short is buoyed by the animation style which is hugely reminiscent of DC’s animated works. Well, that’s because director Matthew Bordenave has been associated with projects like Young Justice (2012-2021), Batman: The Long Halloween duology, Suicide Squad: Hell to Pay (2018), and more. The voice-work by Aisha Tyler, Don Cheadle, Somali Rose, and the legendary John DiMaggio makes the viewing experience incredibly engaging. And if you were interested in knowing more about Nubian Prince after his name was mentioned in the live-action series, then this short is for you.

“John and Sun-Hee” is hands-down the best short in The Boys: Diabolical. It follows an elderly couple trying to escape Vought after John (Randall Duk Kim) injects his wife Sun-Hee (Youn Yuh-Jung) with Compound V to fight her cancer. As you can imagine, it’s absolutely heartbreaking to see these two people who unconditionally love each other go through hell to survive. Steve Ahn, who has previously worked in projects like The Legend of Korra (2012-2014), effectively adapts that animation style to realize this story. He injects every frame, every expression, every bit of movement with a sense of melancholy, which is ever so slightly contrasted by the neon-lit gore. But it’s this idea from the mind of Andy Samberg that the fight against cancer eventually consumes the person suffering from it and there’s no win-win scenario here, is soul-crushing. Samberg and Ahn take things very seriously and that’s commendable. No jokes, no gags. Just straight-up fantasy, action, and drama. And the result is nothing short of a masterpiece.

“One Plus One Equals Two” is probably the only episode that adds to the canon of the live-action series. Because it not only features the voice actors from the original cast but tells a story about Homelander that’ll complement the devolution that he’s about to undergo in Season 3. It shows Homelander’s first mission where he’s tasked with neutralizing a chemical plant with “terrorists”. He’s requested to hold his ground till Black Noir arrives. However, since Madelyn Stillwell has urged him to not be bested by Noir, he doesn’t wait and engages the “terrorists”, thereby creating a lot of chaos. As per usual, the animation is colourful, dynamic, and simply brimming with detail, while Antony Starr proves yet again that he’s the best at portraying Homelander. But more than that, the visuals and the narrative really prioritize fleshing out the character of Homelander and how damaged his psyche actually is. In doing so, the short echoes the original series’ message about not making people who are designed to kill the emblem of justice.

In conclusion, The Boys: Diabolical is as entertaining as the trailers promised it would be, if not more. As mentioned before, science-fiction stories, superhero stories, or anything that’s not particularly grounded in reality, should get the animated treatment. Because it’s the medium that truly allows it to flourish. A lot of work goes into building the live-action version of those stories. There’s no denying that. Animation isn’t cheap and it requires a lot of time and effort as well. But it is the latter that offers so much more freedom than a fully practical set or the most sophisticated visual effects can provide. And that’s what is precisely on display in Diabolical. Now, you are free to have your personal or professional reasons to agree to disagree with that sentiment. However, there’s no reason to miss this anthology series. Also, if you end up liking it, give Star Wars: Visions (2021) ago as well because it also tells self-contained stories that only happen to be set in a galaxy far, far away.

The Boys: Diabolical streams on Prime Video from March 1.