The Father’s Shadow [2019]: ‘Fantasia’ Review – The Horrors of Unresolved Grief

Brazilian film-maker Gabriela Amaral’s second directorial venture, The Father’s Shadow (‘A Sombra do Pai’, 2018) is a strange dysfunctional family drama with elements of horror incorporated in a graceful manner. While Amaral’s debut feature Friendly Beast (2017) was violent and frantically paced, The Father’s Shadow is more restrained and depends on meticulously designed eerie atmospherics. The plot revolves around a nine-year-old girl, Dalva (Nina Medeiros), who has lost her mother a few years earlier and distressed about the fact that she is beginning to forget her features. Daval’s father Jorge (Julio Machado) works at the construction site and remains reticent, having never processed the grief over his wife’s death. The little girl is cared for by her aunt Cristina (Luciana Paes). But she is about to marry and leave the household.

The Father’s Shadow is replete with forebodings. Amaral opens the feature with the shot of Dalva removing the earth that covers the face of a doll buried at the backyard of the house. From resurrecting a baby doll to calling back for the dead mother, things move at a faster rate in Daval’s life. She is suddenly forced to become an adult; burdened to take responsibilities that’s too much for her age. Meanwhile, Aunt Cristina hoping to tie the knot with her boyfriend performs a simple ritual, and when it succeeds she praises her niece’s gift as a medium. Daval begins to believe in her ability to conjure spirits. To add to the narrative’s mysterious elements, Daval’s mother’s grave is opened, the bones shifted to a different place. 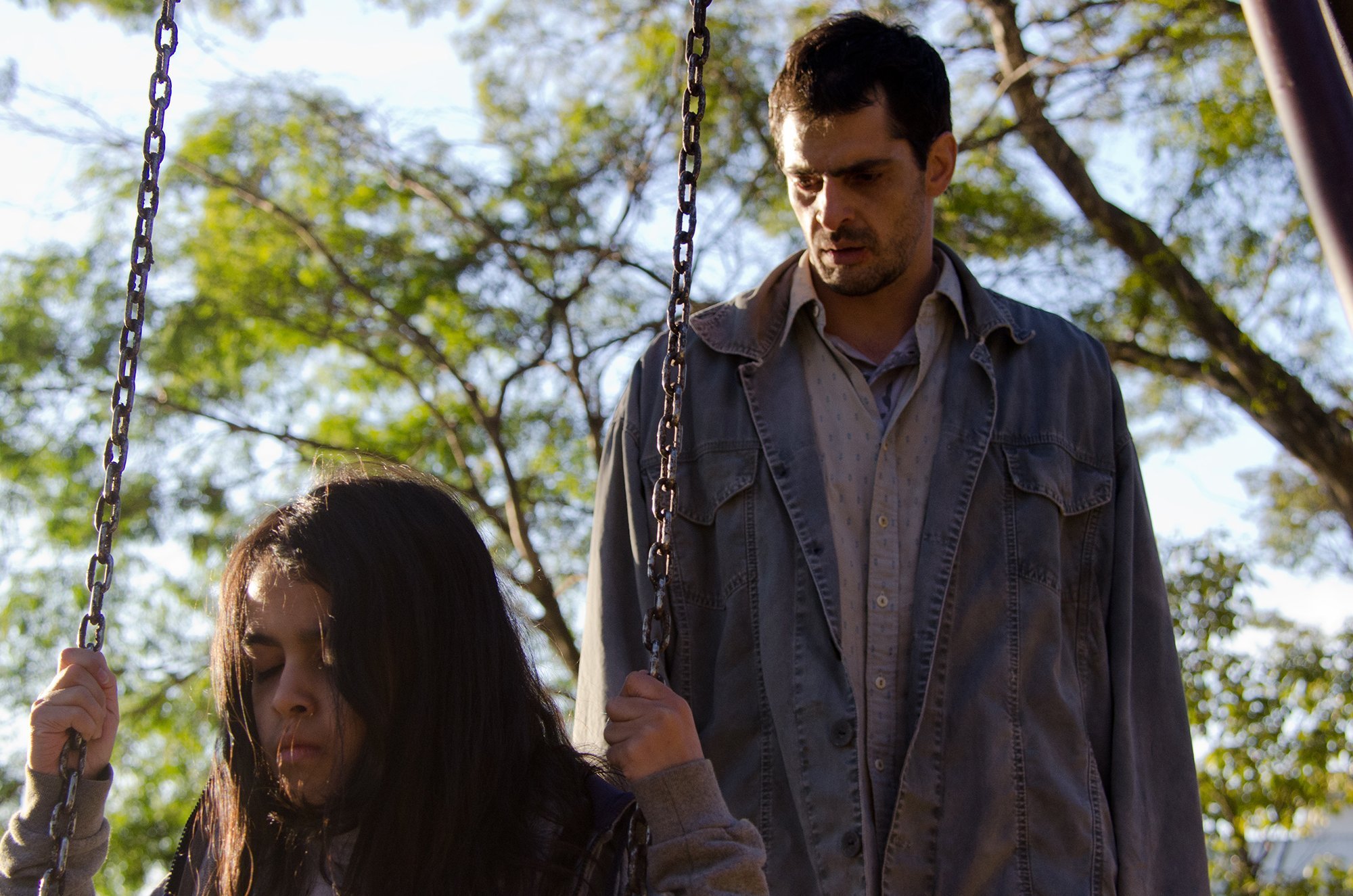 The leftover hair and teeth of the mother are added to Daval’s collection of spooky objects, and maybe this could help the kid bring back her mother. More symbolic and visual references are spread throughout the narrative: a bean plant that won’t sprout; a dark constructing site reflecting Jorge’s unbearable existence. Adding to Jorge’s woes is the suicide of his friend and co-worker, Almir. The fear of unemployment gets mixed with the black pool of grief, reducing him into a shadow of his former self.

Related to The Father’s Shadow — Ma [2018]: ‘NYAFF’ Review — A Sumptuously Visualized Horror with a Weak Narrative

An accident at the workplace leaves a large gash near his shoulder. Daval believes her father is getting turned into a zombie. Through Jorge character, the director attempts to portray how men are generally shunned from showing sadness and pain. And its Jorge’s increasing frailty that makes him dangerous (or as Daval calls, ‘a monster).

Through, The Father’s Shadow starts off as the archetypal awakening-the-dead horror, the complex characterization takes the narrative beyond cliched dimensions. The story perfectly aligns itself to the little girl’s perspective, possessing the quiet, haunting quality of Spanish masterpieces, Spirit of the Beehive (1973) and Cria Cuervos (1976). The classic horror elements add a fine texture to the narrative. However, at its heart, this is about a young girl confronted with death and family disintegration, and how she responds to all these bigger problems.

The Father’s Shadow may not have fully achieved the visual eloquence of Victor Erice’s mesmerizing feature, but director Amaral resists the temptation of traveling down the familiar horror trajectory. Shot by Argentine cinematographer Barbara Alvarez, the intriguing mise-en-scene elegantly carries the weight of the themes. Nina Medeiros has given a very introspective performance as Daval.  She brilliantly emotes her yearning for parental love and Amaral never typifies the girl’s character as a little witch.

Overall, The Father’s Shadow (92 minutes) is an intriguing tale of a dysfunctional family that uses silence and suggestions to create its atmosphere of dread and doom.

Someone in the Clouds [2019] 'NYAFF' Review: A Cheesy Attempt at Humor and Romance

The Father’s Shadow [2019]: ‘Fantasia’ Review – The Horrors of Unresolved Grief