As one settles onto the seat and puts on a pair of 3D glasses, ready for an animated experience, Disney’s The Lion King (2019) stupefies its audience in its first scene itself. In almost a second you are transported to the Pride Lands of Africa and you stand there observing the sun, grass and the animals. The imagery is so real that you can almost feel the wind as you hear the African Savanna rustling.

The 2019 remake of the 1994 classic is a visual spectacle. Jon Favreau’s modern rendition takes you into quite a realistic journey into Simba’s life. With Jeff Nathanson’s screenplay remaining true to its classic version, the film is a scene by scene replica of the original with just a few tweaks here and there.

One for example, this time we see Nala fighting Scar and the hyenas before she escapes to seek help. The humour in the dialogues of Zazu, Pumbaa and Timon are surely hilarious but have somehow lost the touch that they reflected in the classic. That is the thing with the photorealistic CGI that we see.

It gives a very realistic feel, with each of Mufasa’s whiskers feeling real but paradoxically it is too close to real to let us immerse into Simba’s story. Emotions are felt but are not as raw and soul touching as the happy, bouncy, colourful animation of 1994. 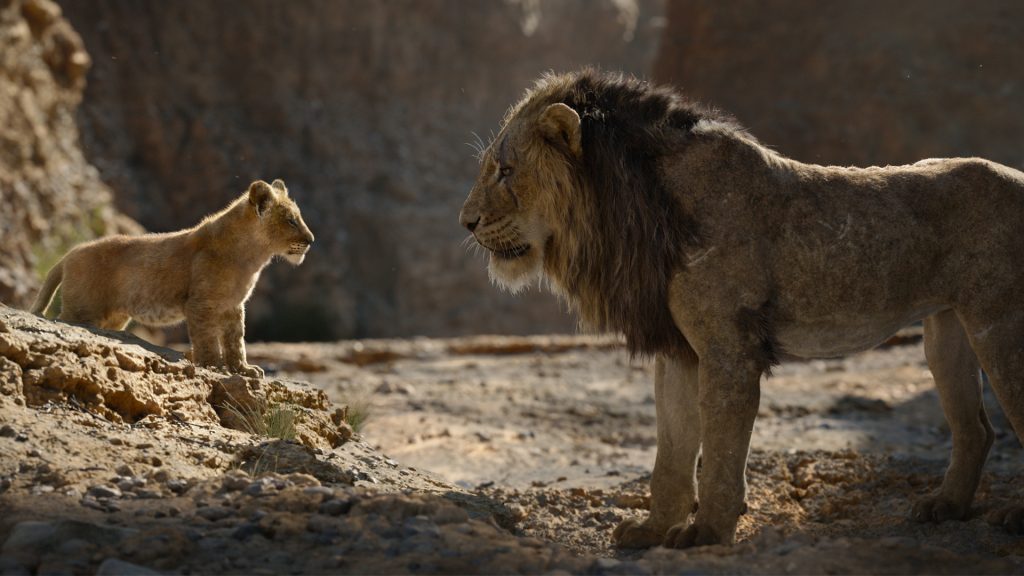 Simba’s predicaments, Mufasa’s death, Zazu’s jokes all hit us harder when we knew we were watching a fictional tale and the animation assured us of the same. In the contemporary version however, the mind is unable to seamlessly sync with what the eyes see. It can be said that it feels like watching Animal Planet knowing that the commentary is a fictional tale.

A part of the reason why the classic Hamlet-inspired narrative does not fascinate us much is because the story is being re-told. Like any other classic that is revised after many years, it needs a change in the way it is narrated. While Favreau has added a few new elements, the major change lies only in the imagery.

A lot of credit to what we feel in the film’s important moments goes to the voices that we hear. Scar (Chiwetel Ejiofor), Zazu (John Oliver), Mufasa (James Earl Jones), JD McCrary (Young Simba), Seth Rogen (Pumbaa), Billy Eichner (Timon) ,Donald Glover (Simba) and Beyonce Knowles-Carter (Nala), all are at their best.

Not to forget, Hans Zimmer’s remake of his Oscar winning music is beautiful and so are the scores ‘Circle of Life’, ‘Hakuna Matata’ by John Elton and Tim Rice. Beyonce’s ‘Spirit’ is also a great addition.

All of Disney’s films that are being re made are not as good as their original versions. Like all stories that are told and re-told down the generations and altered to make them interesting, Disney too needs to do something more to give to the toddlers today what was fun loving, cute and heart wrenching back in the 90s. It is only then that the ‘circle of life’ will be complete.