Aki Kaurismäki’s ‘The Match Factory Girl’, the concluding film in the Proletariat Trilogy, opens with a batch process of match stick manufacture and packaging. A big log sliced into thin sheets, chopped into thousand sticks, stacked together in batches and packed in boxes on an assembly line. The machine does everything, including sticking the labels on it. Except, we see a hand of a youthful girl re-adjusting the labels on matchbox packets, and then the camera glides to reveal her expressionless face. She appears like an extending element of the machine, standing straight, with no emotion on her stoic face. She only moves her hand, like it’s programmed.

As we learn more about her daily routine in the following sequences, we find how she has turned into an object of exploitation by society. She goes home in a tram. At home, she cooks for her mother and step-father while they sit comfortably on the couch, watching the news. We learn about the political situation through the TV. Later, she sleeps on a sofa. Like a clockwork, her bland life continues. She even pays rent and gives the entire salary to her parents. She has nothing but herself.

When she visits a nightclub to seek desperately a bit of affection from men, her cruel fate, once again, disappoints her. She is not only a cog in a factory wheel of the match factory but of her own life too. If she goes missing from her work, they would replace her the very next day, with no one bothering to find her whereabouts. Her destiny would be worse than a bolt in a machine. For a missing bolt, people would try to search it in the proximity until it’s replaced with a new bolt. 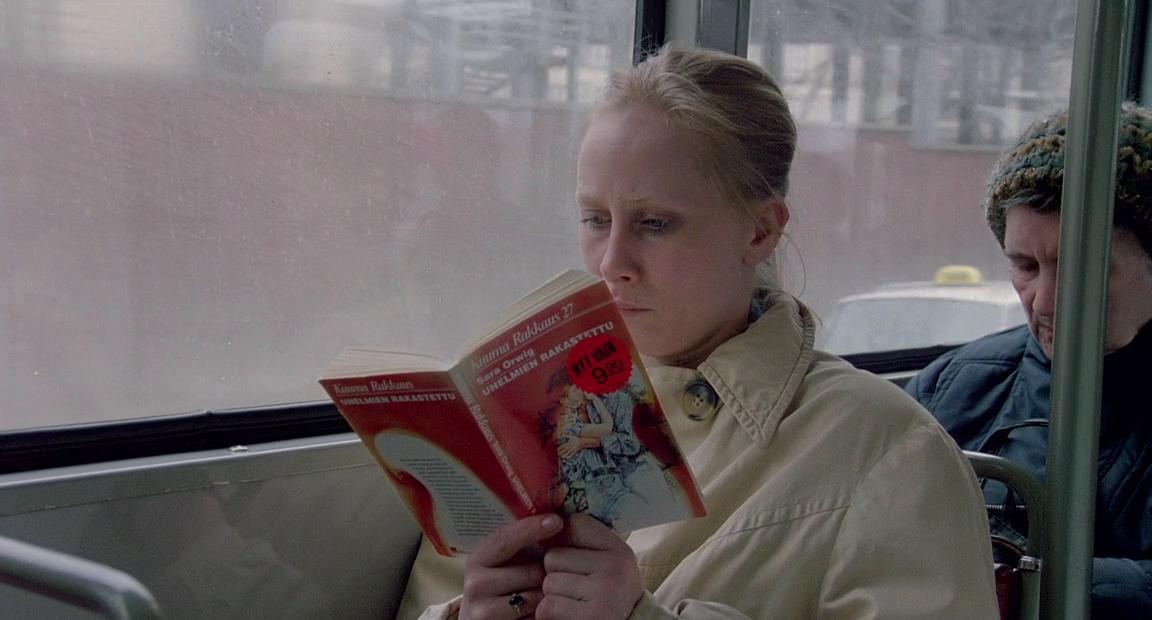 She follows a rigid compartmentalized regime, living like a perpetual-motion machine in a thankless job – at the match factory and home. It seems as if she is born out of wedlock from Jeanne Dielman (Chantal Akerman’s masterpiece Jeanne Dielman, 23 Commerce Quay, 1080 Brussels). The similarity in the narrative structure is uncanny. Both the characters are stuck in their routine, monotonous lives. They are unperturbed by their surrounding until pushed over the edge.

She is Iris. Her existence is so inconsequential & dispensable that Aki Kaurismäki didn’t even name the film after her name, instead settled for addressing her indirectly. What is even worse that we learn her name after she writes it on a piece of paper as no one addresses her until that moment. She is passive, cold and emotionally detached.

She seems to have cut from the same cloth as Marie in Robert Bresson’s ‘Au Hasard Balthazar’. They both are tortured sould and made to suffer. However, the similarity does not end here. The sparse dialogues, the grating ruthlessness of the society, dispassionate performances, and, the most important of all, the elliptical editing – particularly during Iris’s accident scene – has traces of Bresson’s minimalistic filmmaking. Though Kaurismäki’s style is less radical, and his minimalist visual aesthetic has an intertextual tie to the modernist cinema. He bolsters the compelling narrative with visual gags that leverages the crisis of Iris into the comedic episodes without disregarding her suffering. Even when she goes out to take revenge from everyone who wronged her, Kaurismäki resorts to unusual comedy, stripping off Iris from the spectrum of emotions, keeping her anger passive for us.

Kaurismaki dedicates the film “to the memory of Finnish reality” — a look at an encumbered individual of Finnish working class. Overall, “The Match Factory Girl” is a devastating cultural portrait of how the economically weaker section is neglected and cashed in on their desperation.

Slow (2023): ‘Sundance’ Movie Review – A contemplation on love, intimacy, and companionship amplified through a fluid narration

The Playlist (2022) Netflix Miniseries: Recap & Ending Explained – What is the Significance of the Last Shot?