When we hear the word “outlaw”, what are some of the names that come to mind? Jesse James, Billy the Kid, Butch Cassidy, and Robin Hood. Some of the fictional ones are Aladdin, Han Solo, Captain Jack Sparrow, Dominic Toretto, the Winchester brothers, and Zorro. Yes, the verdict is still out on how much of the information on Robin Hood is real or fictional. But you know that these names are synonymous with the act of breaking the legal boundaries that have been set by our capitalist and fascist overlords. That said, have you ever heard of Steve Glew? Probably not. If your country doesn’t have a Pez factory, there’s a chance you don’t know what Pez is. And that’s exactly why The Pez Outlaw [2022] is a must-watch.

Directed by Amy Bandlien Storkel and Bryan Storkel, The Pez Outlaw tells the story of one Steve Glew who gave the North American branch of Pez a run for its money back in the ‘90s. The documentary film intercuts between interviews with Glew, his family members, his fans, his haters, and a fictionalized recounting of Glew’s escapades with Glew playing himself. Pez is an Austrian candy that’s sold in a Pez dispenser. Now, it’s those Pez dispensers that are widely sought after due to their unique designs and overall appeal. As per the movie, back in the ‘90s, Pez USA made its own Pez dispensers instead of importing them from Austria. But Steve felt that the Austrian Pez dispenser designs were artistic and deserved a wider distribution. That’s why he bought them in bulk and sold them in the USA. And the rare nature of those dispensers gave them the status of a collectible classic, thereby allowing Steve to make a lot of money out of it and earning him his namesake.

The Pez Outlaw works so well on so many levels. The most obvious one is the outlandish nature of the story. The most cliched “collectors’ items” are rare jewels, vintage cars, bikes, and planes. Since we are living in an era where owning entertainment-related paraphernalia has become an integral part of pop culture, Funko pops, action figures, art prints, and posters are also classified as collectibles. However, (as someone from India) it is quite surprising to see that there’s not only a whole subculture around Pez dispensers but also a story as bonkers as that of Steve Glew. We are talking about legitimate heists, cross-country imports through war-stricken landscapes, spies, and a fully-formed arch-nemesis nicknamed the President trying to stop Glew from making a profit. Yes, technically what Glew did was illegal. But illegal according to whom? One man didn’t want the designs from his company’s parent branch to come to the USA. And that attitude automatically makes you root for the Pez Outlaw. 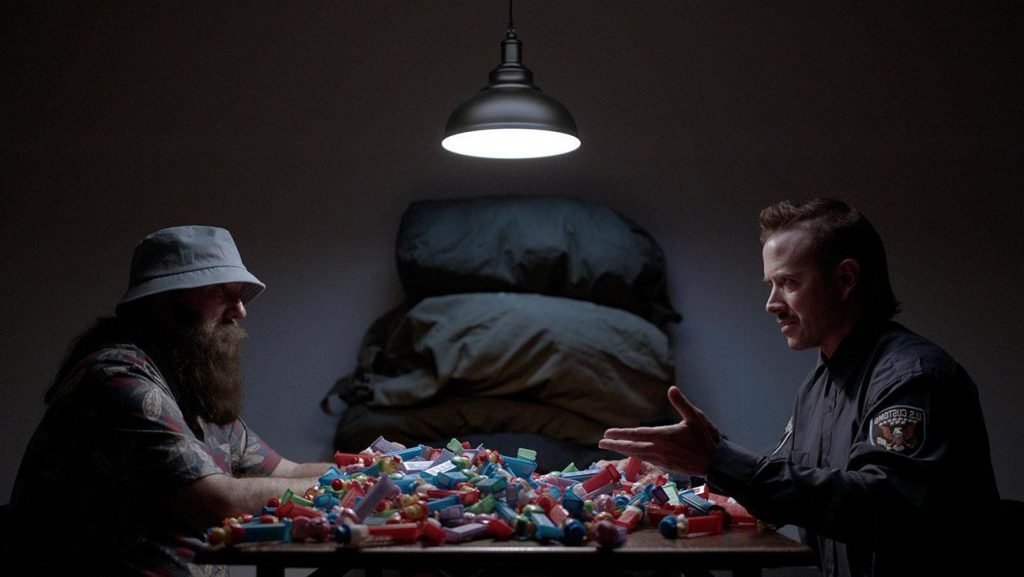 In terms of visual storytelling, The Pez Outlaw is masterful. Production designer David Pink, hair and make-up designer Emily Frew, and costume designer Casey Granada simply knock it out of the park by recreating the ‘90s to the T. The attention-to-detail in every frame as well as the scale and scope of some of the scenes are simply astounding. And it’s cinematographer Britton Foster and editors Evan Vetter and the Storkels (the directors) who make the journey through all of it a wholly subjective experience. They understand that this is Glew’s story and it needs to be told the way he felt it. That’s why standard cinematic footage goes into a noir mode when Glew says that a person uttered “Kolinska” (the location of a Pez factory) just like Charles Foster Kane said “Rosebud” in Citizen Kane (1941). Or you see SWAT teams infiltrating the factory in which Glew worked to show what he imagined while reading a Tom Clancy novel. Or a Pez outlet mimicking Willy Wonka and Chocolate Factory (1971) just to emulate Glew’s euphoria. It is nothing short of a spectacle.

Check out – The City And The City [2022] ‘Berlinale’ Review: The Holocaust Documentary Is Ingenious & Provocative

However, like most modern stories about outlaws, The Pez Outlaw is ultimately a love story. Amidst all the craziness, all the twists and turns, and all the paranoia, it is Steve and Kathy Glew’s romance that forms the beating heart of the movie. It is through the evolution of the relationship that Steve as well as the directors of the movie manage to comment on the definition of masculinity. They show us what a White man can get away with it in this world. They do paint him as an anti-capitalist superhero of sorts. And they tell his saga exactly like that of a classic thriller film. But what makes the movie (for me, at least) is that despite treating Steve and those around him like mythical characters, it eventually grounds them in reality. In that way, even when the credits are done rolling and your tears have dried up, you leave the movie with the idea that responsibility trumps whimsicality. Having quirks sound “fun”. However, when lives are attached to you, you need to prioritize. If that’s done right, it’ll make you a better person and help you beat unimaginable odds.

In conclusion, The Pez Outlaw definitely has the makings of being a big hit on streaming platforms like Netflix or Hulu. But something about the movie screams that it should be experienced on a big screen in a packed theatre. As Steve Glew rightly says, his story is a good one. It is brimming with eye-popping visuals. There are unexpected twists and turns to it. The storytelling has a sense of thrill and excitement. And it concludes on a very humane, heart-felt sentiment about responsibility and love. In a way, it harks back to what’s known as the golden age of cinema which took audiences on a ridiculous roller-coaster ride and bid them goodbye on a somber, optimistic note. Hence, this Amy Bandlien Storkel and Bryan Storkel directed film comes highly recommended. Please check it out. Who knows? It might convert you into a Pez Outlaw fan.

The Pez Outlaw screened at the SXSW Film Festival 2022.