The Lord of the Rings Trilogy (2001-2003) and Game of Thrones (2011-2019) are considered the cornerstones of the fantasy genre. Some might even say that the genre practically peaked with these two IPs and then died. But that’s not true at all. Fantasy is thriving with the help of movies and shows like Maya and the Three (2021), Locke and Key (2020-ongoing), The Witcher (2019-ongoing), His Dark Materials (2019-ongoing), etc. And it has branched out even further with the help of the superhero subgenre, e.g. Loki (2021), Eternals (2021), and Shang-Chi and the Legend of the Ten Rings (2021). The problem only arises when something tries to ape The Lord of the Rings and Game of Thrones and forgets to have a personality of its own. That brings us to Season 1 of the Prime Original The Wheel of Time (2021).

Based on the Robert Jordan novel series of the same name and developed by Rafe Judkins, The Wheel of Time follows Moiraine (Rosamund Pike), a member of the Aes Sedai, a powerful organization of women who can use magic. She is in search of the reincarnation of the Dragon, an individual prophesied to either save the world or destroy it. Simultaneously, someone called the Dark One is also looking for the same in order to seduce the person over to their side and probably take over the world.

Related to The Wheel of Time (Season 1) – In The Mood For Love (2000): Masterful Storytelling Using Colors

Moiraine, aided by her Warder, al’Lan Mandragoran (Daniel Henney), and the Dark One’s forces collide at the village of Emond’s Field, the place where the Dragon Reborn is supposed to be. Since Moiraine is unable to concretely identify the chosen one, she escapes with four possible candidates, Rand al’Thor (Josha Stradowski), Perrin Aybara (Marcus Rutherford), Mat Cauthon (Barney Harris), and Egwene al’Vere (Madeleine Madden), with a fifth one hot on their trail i.e. Nynaeve al’Meara (Zoë Robins). 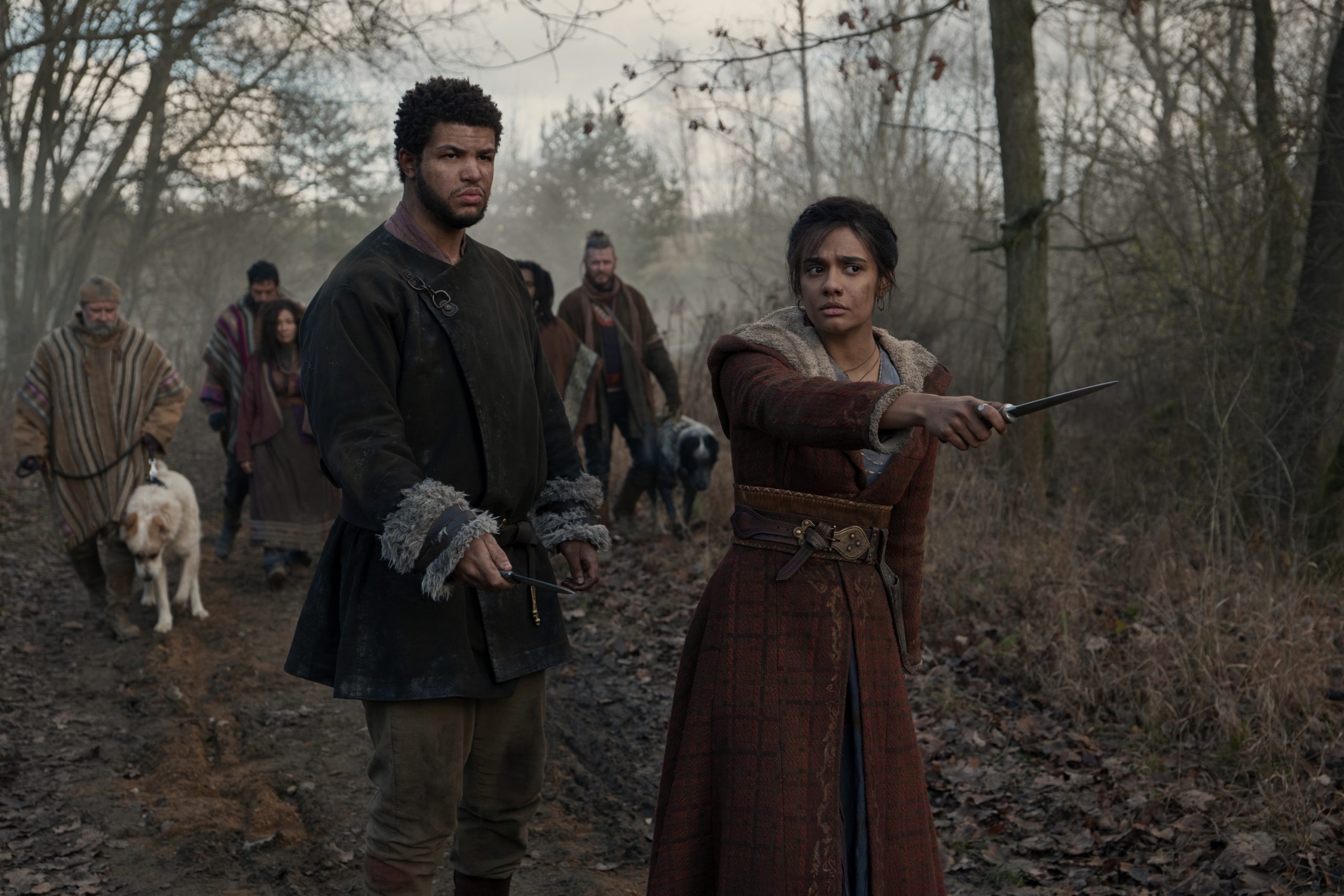 The art direction, costume design, and overall production design in The Wheel of Time is truly astounding. The narrative swiftly moves from one location to another and every single one of those places are geographically unique. They are influenced by the rivers, the rocky caverns, lush forests, or even the lack of something specific. And these influences are aptly reflected in the costumes, the hair and make-up, the furniture, the vehicles, the weapons, and the houses very beautifully.

The VFX and SFX are seamless during their limited screen-time. The character design of the Trollocs, the attention-to-detail, the way they move, feel incredibly visceral and hence, fearsome. When they walk or run at a steady pace, the switch between the real and the CGI double goes unnoticed. But when it has to match up with the camera’s brisk movement, things get a little wonky. Lorne Balfe’s score is easily the biggest highlight of the show, with each musical note twisting and turning in interesting ways, much like the Channeling powers of the Aes Sedai. In doing so he proves that no genre is difficult enough for him to master.

Everything apart from that in The Wheel of Time is plain boring.

Also, Read – Wheel of Fortune and Fantasy [2021]: ‘Berlinale’ Review – A Gorgeous Trifecta About the Conversations that Bind Us

The writing by Judkins and his team is not at all concerned with making the characters relatable or familiarising the viewer with the world of the show in an organic way. That’s why you never feel like you are on this epic and perilous journey along with Moiraine and her posse. It always seems like you are watching everything unfold from a distance. Hence, you don’t get to experience a lot of the emotional moments as fiercely as the characters experience them.

Well, actually they don’t even feel like characters after a point because they turn into the expository machines or devices that initiate exposition. Because The Wheel of Time thinks that “show, don’t tell” is a very old concept of storytelling. So, they flip it and keep throwing fictional facts after fictional facts, as if the series is an audiobook, with no need to do anything visually. Therefore, while watching any of its one-hour-long episodes, if you feel your eyelids losing their strength, don’t blame yourself. It’s not your fault. 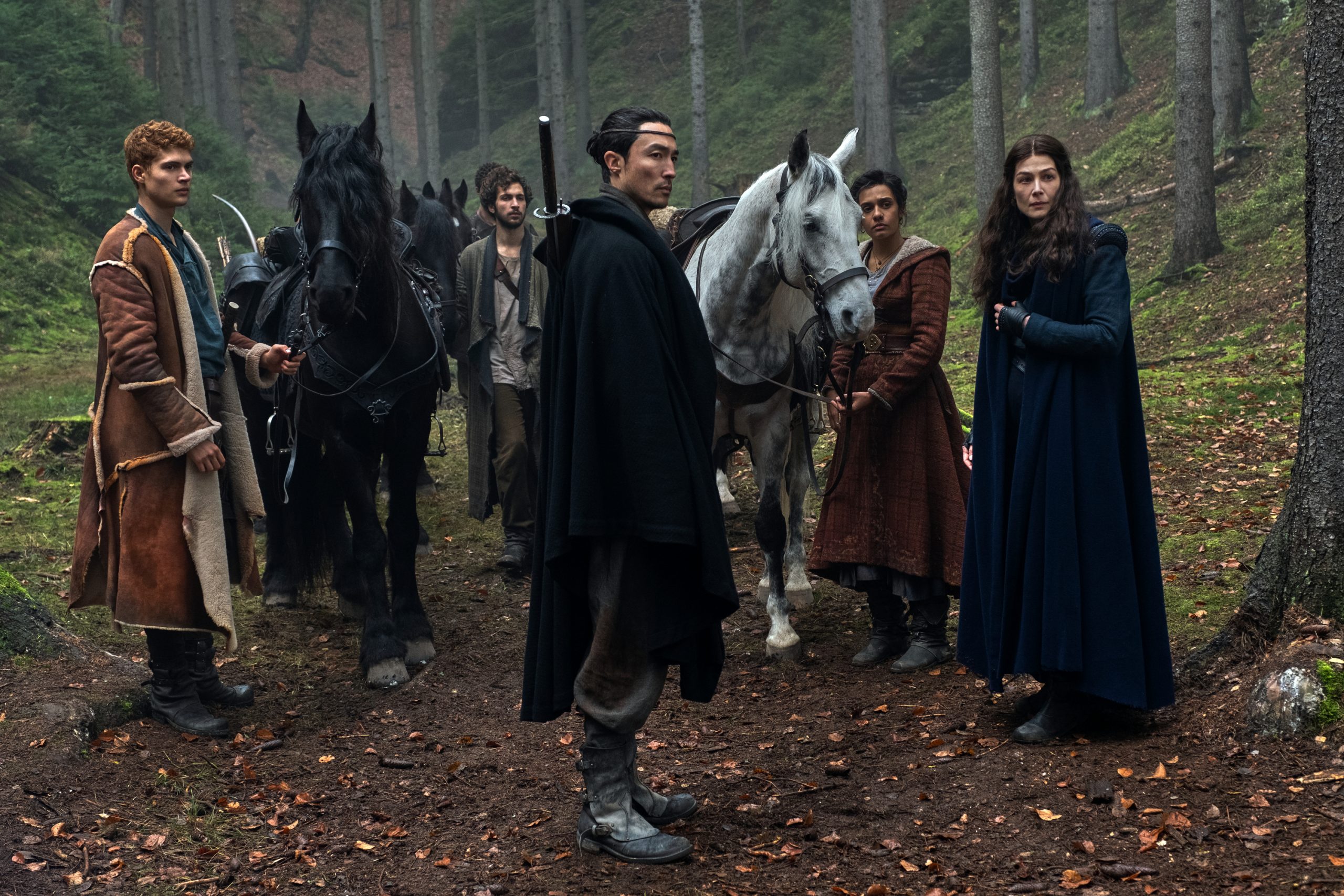 Actually, there’s one shot that is uncannily dynamic. Eamon Valda (Abdul Salis), a Whitecloak, watches an Aes Sadai burn and both Eamon and the burning Aes Sadai are put in the same frame via a reflective goblet which is stained by the blood on Eamon’s hands. That’s it! You don’t get anything as interesting as that again. And it’s not like the show didn’t have an opportunity to do something engaging with its cinematography.

There are several action sequences littered throughout its exhaustive run-time. They alternate between hand-to-hand combat, sword fights, axe fights (Is that what they are called?), bow-and-arrow shooting, and of course, moving and bursting objects with magic. However, the weight of these pieces are either undermined by shaky-cam or by the awkward shot compositions. The extreme wide shots and wide shots are used to establish the location of a place. But would it have killed them to employ a few wide shots, instead of the usual close-ups and medium shots, to make the action a little more comprehensive? Well, at this point, your guess is as good as mine.

Related to The Wheel of Time (Season 1) – Soul of a Beast [2021]: ‘Locarno’ Review – A Visual Fantasy with Entertainingly Deranged Moments

That said, the overall direction is The Wheel of Time’s weakest link. It’s difficult to say for sure if the directors along with Judkins were limited by the budget or by their imagination. But they surely bungled a brilliant opportunity to extract the most out of Rosamund Pike and Álvaro Morte. Pike is currently on a hot streak with great performances in A Private War (2018), Watership Down (2018), State of the Union (2019), The Informer (2019), Radioactive (2019), and I Care a Lot (2020). And we all know about Morte’s stellar work in Money Heist (2017-2021). Yet in this show, they find themselves stilted, misguided, and weirdly enough, off-screen with not much to speak or emote. 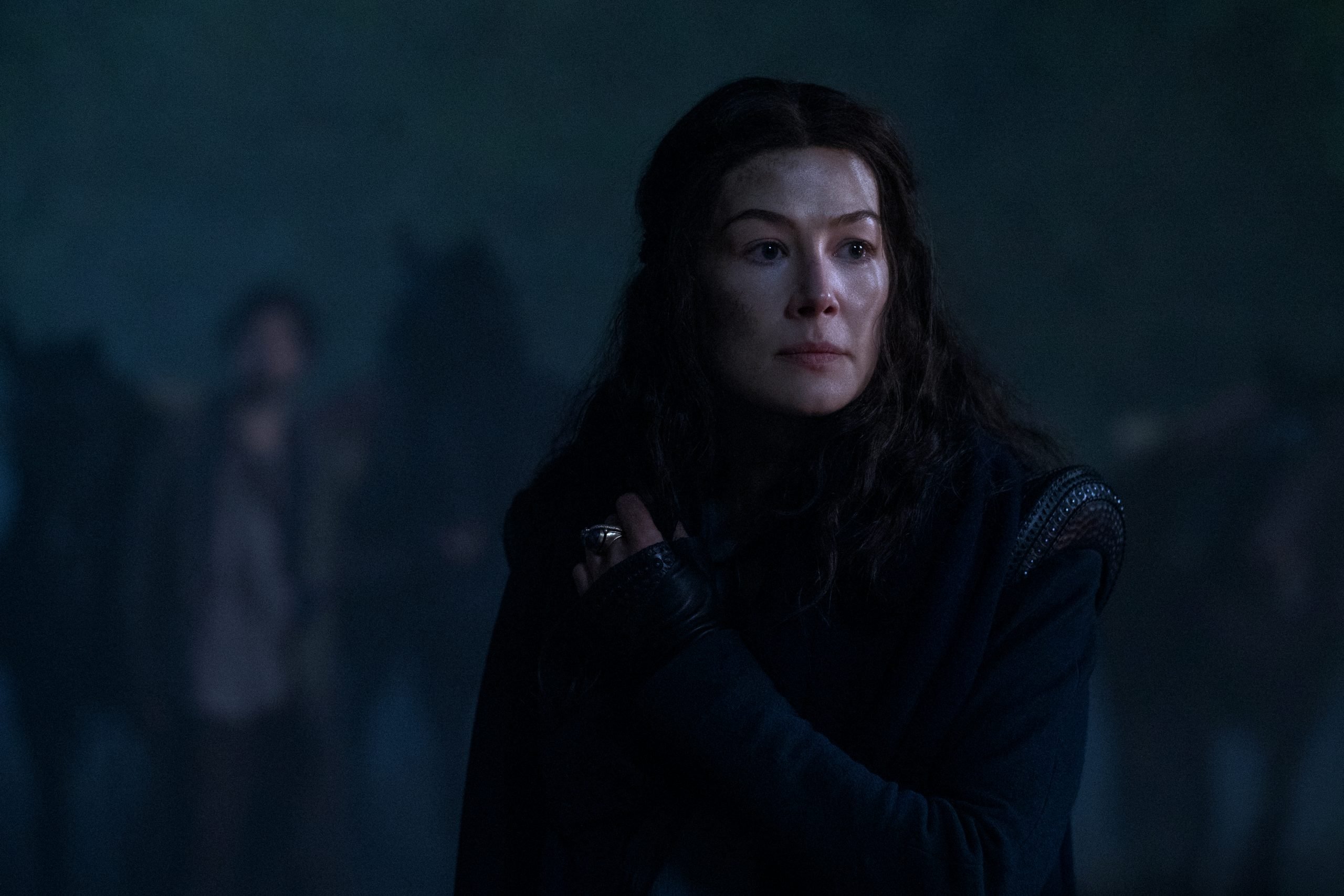 You’re probably not even going to remember that the great Michael McElhatton is even in this show. Henney gets a lot to do but the end result is mostly one-note because the primary goal assigned to him is to “look cool”. The actors portraying the Aes Sadai suffer hugely as they are made to shift between expository dumps and self-serious hand gestures. So, with the adult cast in the dust,  you’re left with fresh faces to entertain you. And they aimlessly bounce around all over the place, and for no fault of their own. Stradowski in particular seems like he can’t act at all. Harris looks like he has walked off the set of a Kingsman movie and straight into this show. Rutherford looks confused most of the time. Madden comes off as helpless. Robins is the one who appears three-dimensional. However, the writing around her is a letdown, thereby bringing things back to square one.

Season 1 of The Wheel of Time clearly has a lot riding on it, with Prime Video planning to stretch it to a couple of seasons. If that’s the case, maybe they should have polished the script some more before green-lighting it. Or maybe they should have turned the source material into a movie because everything doesn’t need to be a show. Now, if you want to give The Wheel of Time brownie points for trying to stand out in the fantasy genre, please, go ahead and watch it. If you don’t want to, then maybe give one of the above-mentioned titles a try. At least they will be worth your time.

Here’s the Best Way to Watch The Office US