In The Mood For Love (2000): Masterful Storytelling Using Colors: The romantic drama by Wong Kar Wai is a fluid narrative of an unlikely romance and unexpected emotions. The story starts fast-paced but the pace slows down as we go further into the movie. The change of pace was an indication of how both the protagonist were living in an illusion of a loving partner. They were too busy to see the truth of their spouses cheating on them.

Once they get to know about the truth their life slows down as they cannot seem to be able to think about anything else. The thought of their spouses cheating on them consumes them so much, that it has slowed down every other aspect of their lives.

The story is has a voyeuristic narrative with its sly camera angles and frames that indicates the audience as an intrusive spectator. The story develops as an inevitable blooming of a flower when a bond is created between the two protagonists. This bond is a result of their suspicions about the extramarital activities of their spouses, and it deepens and the mood changes from a platonic friendship of that of a mood of love.

Throughout the movie, we can see a lot of pan shots and it consistently holds a rose-colored light over the shots to heighten the romanticism of the aesthetics. Wong Kar Wai has paid close attention to details. When Mrs. Chan unconsciously replies with her husband’s name upon being asked for her name, it implied her dedication as a wife. Also signifying how much power does her husband hold over her life. 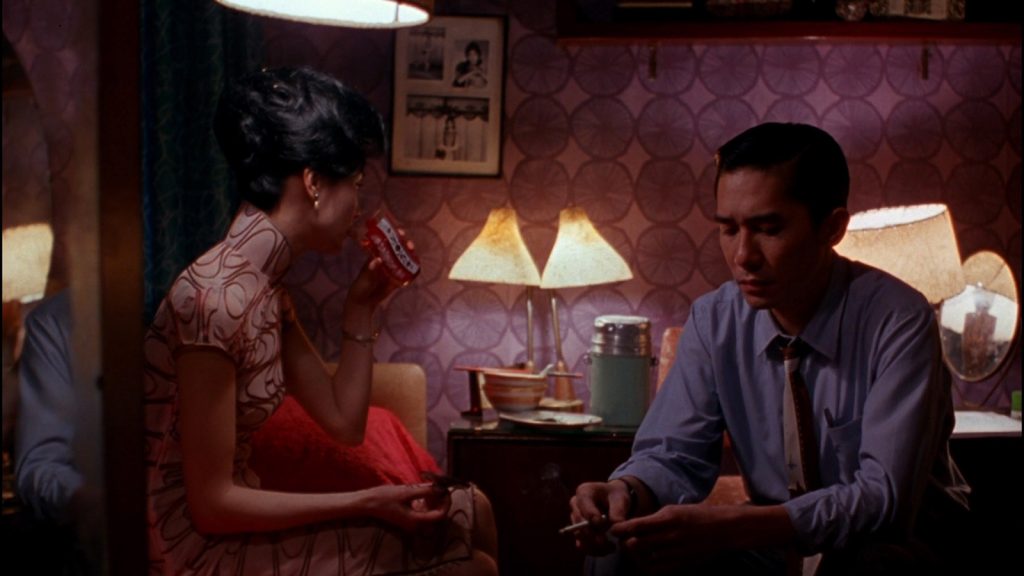 There are a lot of over the shoulder shots used where the back of the protagonists is visible implying that they both are turning their backs, first to the truth of their significant other being involved in infidelity, and later about their feelings for each other.

While the red color in the light design is used for Mrs. Chan, we also see the color blue creep in whenever Mr. Chow comes into frame and when it is established that they are meeting regularly and might be developing feelings we see a mild wash of purple color- a mixture of red and blue; a great symbolism for their developing friendship. Towards the end, Mrs. Chan starts wearing shades of blue and green giving a sense of separation.

Many shots in the film are in slow motion pointing out the slow pace of both of their lives which is filled with loneliness, while Mrs. Chan fills her loneliness with her typewriter Mr. Chow smokes and tries to release the stress in the smoke.

While Red is used to give that romantic feel of looking at the world through a rose-colored glass or a rose-colored window as seen in many of the frames. Blue and green are used in their workplace showing the contrast between their boring work life and for when they are together, even with a wall between them. 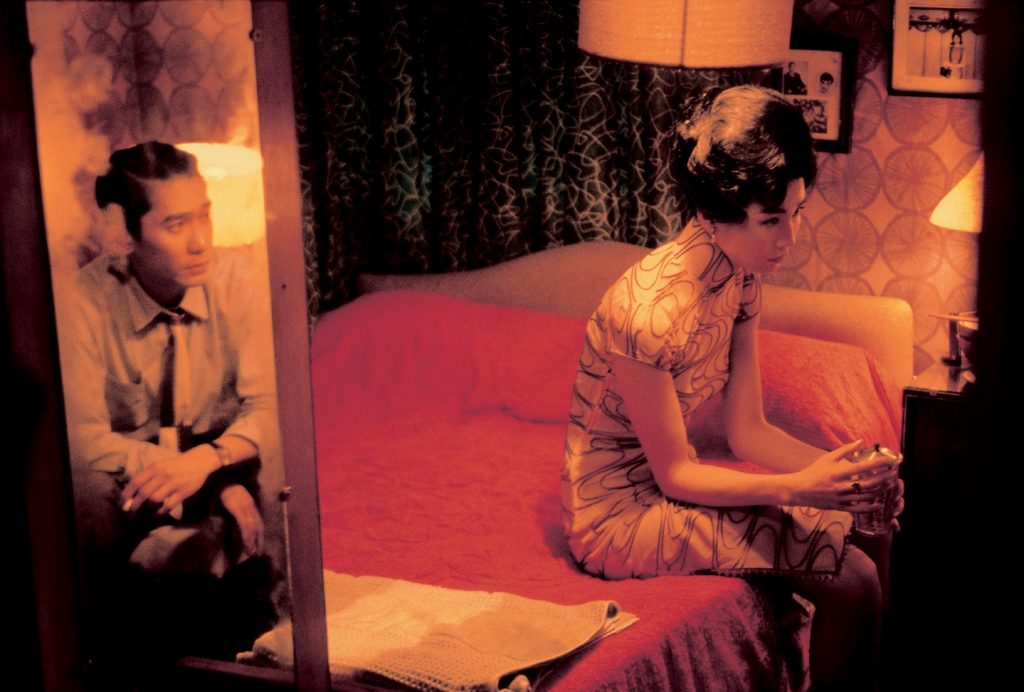 The setting throughout the film was cluttered and gave sense claustrophobia implying the chaotic state of the lives of the protagonists. The lighting was always dingy with usually an overhead light or lamp as the source of light a great metaphor for the dark life of the protagonists and they being the only source of light for each other in the dark and gloomy life of theirs.

Also Read: In The Mood For Love (2000) When Love Was Merely A Possibility

Wong Kar Wai leaves a sense of mystery in the film as throughout the film it is not established through any direct visual scene that they got sexually involved with each other or of they met again or if the kid shown at the end belongs to tony or if their spouses were even cheating on them. Even the faces of their spouses were not shown in the film.

The music although sometimes gets too repetitive holds the story well with its melancholic and heart-breaking melodies. In the mood for love presents an ironic romance with secrets and mystery that only the tree that Mr. Chow whispered into will ever know.