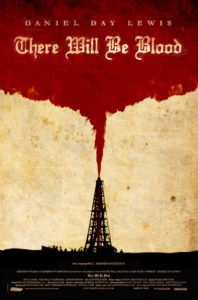 What more is there to say about one of the most widely and enthusiastically acclaimed films this side of the millennium? Named the best film of the 21st century so far by the New York Times, number 8 on They Shoot Pictures, Don’t They?’s Best of the 21st Century, number 3 on the BBC’s 100 Greatest Films of the 21st Century, and appearing on critics’ best of the ‘00s list more than any other film, There Will Be Blood is a towering piece of work that deserves any praise it gets.

Hopes were high for a new Paul Thomas Anderson film, the early blooming writer-director who made two masterpieces before he was 30 with Boogie Nights (1997) and Magnolia (1999), and the five year gap between There Will Be Blood and his incredible Adam Sandler off-beat rom-com Punch-Drunk Love (2002) just appetised all the PTA fanatics even more. But there wasn’t much that could’ve prepared anyone for the behemoth that was his fifth film, his most insular film, focusing intensively on the one character and his one goal, rather than a motley crew of characters like in Boogie Nights and Magnolia or the burgeoning relationships of Punch-Drunk Love or his impressive debut Hard Eight (1995).

There Will Be Blood was quite dissimilar to his previous masterworks in tone. Each of his films all really delved into the muck of human existence, but they all ended on a more or less optimistic and hopeful note. There Will Be Blood turned out to be a much crueller affair, a film with humour as dark as the crude oil it depicts, and a film that gets funnier with each viewing. Although PTA seems to have an understanding of each character he writes, he certainly doesn’t have as much love for the central character and his plights as he did in his previous films.

There Will Be Blood marks the turning point in PTA’s career. From this point on, into The Master (2012) and Inherent Vice (2014), he wears less of his heart on his sleeve in favour of being more critical of the modes that humans, particularly the ambitious creatures, can find themselves in. Whether it’s the competitiveness of capitalism or the mechanism of cult-like structures, PTA certainly started to tackle some hefty (and very American) subject matters, and with aplomb. He doesn’t convey human interactions as much as he analyses them, making them less immediate and true-to-life than before, but now they are more alien, insect-like, bizarre, maybe unpredictable, yet utterly compelling and fascinating and scribed in a way that no other screenwriter can muster (I’ve yet to see Phantom Thread, which looks like a warmer film, but I could be completely wrong).

Released at the very end of 2007 to cap off what was evidently a fantastic year for films, I saw There Will Be Blood, which was luckily playing in a multiplex, in March 2008. I’ll always remember walking into the cinema and thinking to myself “this better not just be good, it better be fucking good. It better be a masterpiece. I’ve just seen No Country for Old Men, I Am Legend, Sweeney Todd, and American Gangster recently and they all blew my mind, so on top of all the incredible praise I’ve heard, my expectations can’t help but be a little high”.

Even before the title came up and my expectations had already been exceeded, all thanks to the haunting, 2001-esque music, comprised of uneasily tuned strings, the music of which was a film debut from composer and Radiohead member Jonny Greenwood, whose worked with PTA ever since and has had success working his talents on a number of other films. He is just one of many, many talented motherfuckers that put this majestic film together and provided me with my most memorable and likely my absolute favourite cinema experience ever.

Everything fell into place. The dialogue-less opening, Daniel Day-Lewis’ immense award-winning performance that was rightfully praised to death even hours after the film’s release, Paul Dano’s excellent counter performance that should’ve been more recognised by critics and awards ceremonies, the stunning imagery of every single shot that would stay in any viewer’s brain permanently, and of course the essential musical score from Greenwood (it’s so good, I had to praise it twice).

Dano in particular seemed to be surprisingly instrumental in my mind-blowing cinema experience. When I saw his exorcism scene in the first church, I was ecstatic. When I saw his other church exorcism scene, sparring with Day-Lewis, I thought to myself “it’s not over yet, but this is the best film I’ve ever seen”. Once it came to its end, I felt my body had been melted and I was just a pair of eyeballs left on the cinema seat. I was glued there for the duration of the credits, stunned at the kind of cinema experience that I’d never quite had before (and sort of haven’t had since).

Ten years on and about ten rewatches later, There Will Be Blood has dropped from the number one spot on my all-time list to about maybe 10 or 11 or 12. Suffice to say, I still regard it as one of 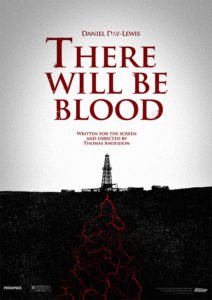 the key films in all of this art-form’s history. As entertaining and as captivating as it is, it is quite a disturbing and rather hopeless reflection of Western civilisation’s capitalist system, but its mirror is so simple, yet potent that it rings so incredibly close to the bone no matter who’s the United States president.

So here we are, with this final film (but not TV series) in this A Decade Series, on this last day of 2017, ten years from this fantastic year of movies (and 2017 wasn’t so bad itself). It seems entirely fitting to end this series with this film in particularly, this extraordinary king of films in this immeasurably brilliant year for films. If there hasn’t already, there’ll be libraries of content written about There Will Be Blood for decades and hopefully centuries to come – what else is there to say? Why don’t you watch it (again) right now.