The word and the act of being ‘meta’ are really close to losing their meaning and novelty. Almost every other movie and TV show has become so self-referential that it doesn’t feel smart to be meta anymore. Instead, it feels like a crutch to cover up lazy writing which viewers won’t be able to notice due to the blinding power of the serotonin hit that comes from a pop-culture reference. Yet, there are some rare exceptions that still manage to surprise us. One great example is AK vs AK (2020), where Anurag Kashyap and Anil Kapoor, under Vikramaditya Motwane’s direction, blurred the line between reel and real to talk about celebrity culture. Almost one year later, it looks like Kevin Hart and Wesley Snipes have done something similar in the limited series called True Story (2021).

True Story is directed by Stephen Williams and Hanelle M. Culpepper and written by Eric Newman, Gladys Rodriguez, Glenda L. Richardson, Matthew Kellard, Devon Shepard, Cameron Litvack, JaNeika James, JaSheika James, and Devon Shepherd. It follows the life of Kid (Kevin Hart), a superstar who does stand-up comedy, features in superhero movies that earn a billion dollars at the box office, is a philanthropist, and has reached that status after struggling for years. If that sounds familiar, that’s because it is.

The Kid is an exaggerated, morphed reflection of Hart himself. That said, the real begins to differ from the reel when Carlton (Wesley Snipes), Kid’s elder brother comes into the picture for a night of celebration. Although Herschel (William Catlett) i.e. Kid’s bodyguard, Todd (Paul Adelstein) i.e. Kid’s manager, and Billie (Tawny Newsome) i.e. Kid’s writer warn him to not do so due to Carlton’s problematic past, Kid goes to a party with his brother. And the night of revelry ends with a dead girl in Kid’s bed, thereby igniting the fire that’ll possibly burn his life down. 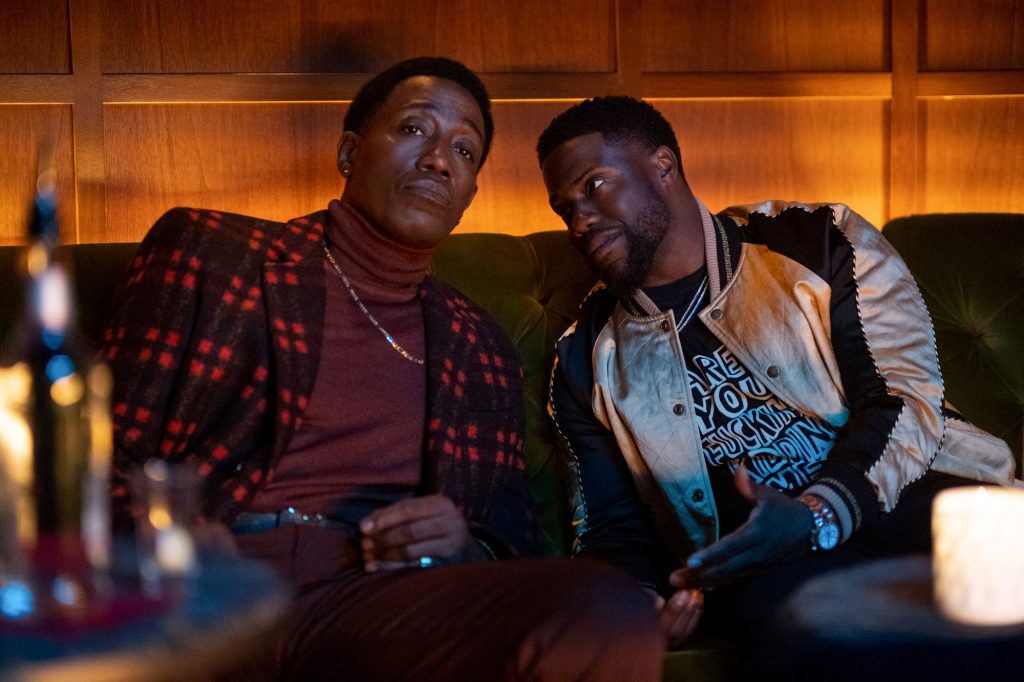 The limited series functions on a number of levels. Through Kid and Carlton’s relationship, True Story talks about carrying a dysfunctional member of your family who is attached to you like a parasite because of your unconditional love for them. Through Kid’s dynamic with Herschel, Todd, and Billie, it talks about how show business forces stars to have a family outside of their family, and how they can be taken for granted due to the lack of blood ties. Through Kid and Gene’s (Theo Rossi) association, the series delves into the age-old question about who’s more powerful: the star or the fan? Can one exist without the other?

Additionally, at the end of the day, is the star going to be more loyal to their fandom or the fandom to their hero? But the most important topic that it tackles is the weight that comes with stardom. Is it really a privilege? Because once a person has everything, they have more to lose when things go south. And the path back to said stardom is going to be much more arduous than it was the first time since every single step wasn’t being scrutinized by, well, everyone.

Williams and Culpepper are insanely efficient when it comes to visualizing the writing, which by the way doesn’t waver from its point of dealing with the aforementioned questions and topics even for a second. Every single shot framed by Tobia Datum and every single scene edited by Geofrey Hildrew, Iain Erskine, and Tamar Feder is there to intricately portray Kid’s devolving life. It’s predictable but in a good way. For example, if you think that disposing of the body in Kid’s room in a certain way will give birth to a plethora of other problems, that’s exactly what happens.

If you think that Kid or Carlton or Herschel or Todd or even Billie should react to a certain situation (which is being kept purposefully vague in this review to keep it spoiler-free), that’s exactly what happens. Not only that, the actors express the anxiety, happiness, and every emotion that exists in between, just like you would expect them to. And this creates a level of engagement with the show that surpasses the need for unnecessary pop-culture references (which there is a lot of, with the biggest one being a Chris Hemsworth cameo) and sets the right standard for being meta.

There’s one problem though with the writing and the direction. As an Indian, it’s unfair to talk about it but it needs to be said. Despite the attention-to-detail, there are times when it feels like True Story pulls back while showing what an African-American star will face when they are having one of the worst phases of their life. The show aptly illustrates the struggle to get to the stage of luxury that Kid is enjoying. Through Will (Eric Nenninger), an obnoxious co-passenger in Kid’s flight, we see how easily racism can be normalized when stars are treated as objects rather than human beings. But apart from a couple of moments (especially one involving cops) like this, it seems like Kid’s race is sidelined to not complicate the story. Which is fine. However, the knowledge that someone of Kid’s stature and race won’t get off as easily in real life as they do in the show feels like a missed opportunity in terms of concretely critiquing racism in the USA. And the reason behind that can be the writers’ inability to differentiate between a White star’s privilege versus a Black star’s privilege as they were too busy dehumanizing Kid with his criminal undertones.

With that out of the way, let’s talk about the acting in True Story. Kevin Hart absolutely owns the role of Kid. If you have seen Hart’s interviews, his performances, and his stand-up acts, he is always Kevin Hart. That is fine when he is giving interviews and doing stand-up. But it becomes a little one-note when you see no variations in his performance. And that’s probably not at all his fault. It’s highly likely that that’s what he is asked to do. Hence, that’s what he delivers.

However, upon watching Hart in this show, you’ll realize he is capable of so much more nuance and that he can command the frame as well as command a live audience’s attention. For the lack of a better word, this is a career-defining act by Hart. Wesley Snipes is equally dynamic. Everything from his body language to his speech is exaggerated. At the same time, there is a stiffness to it all to show Carlton’s inferiority complex. Also, his casting here is an inspired choice since he was on the other side of the fence of stardom in Tony Scott’s Fan (1996), dealing with a troubled baseball fan played by Robert De Niro.

Theo Rossi actually channels a lot of De Niro’s Curly in his portrayal of Gene. But he adds a lot of immature innocence to it so that you can truly empathise with his predicament. And Rossi is so good that there are moments where he outshines everyone else who is sharing the screen with him. Billy Zane as a Greek gangster called Ari is perfect. It is an extended cameo, yes. However, it’s a very memorable cameo.

Tawny, Catlett, and Adelstein are so flawless as Kid’s entourage that there are times where it seems like they aren’t even acting. They play their conversations and reactions to some specific revelations so organically that it is fascinating to watch. John Ales as Nikos and Chris Diamantopoulos as Savvas, Ari’s gangster brothers, are equal parts scary and equal parts funny (in a dry way). In addition to them, every single member of the supporting cast are fantastic and do play their parts effectively in order to make True Story an immersive experience.

If you have watched a lot of movies and shows from the crime genre, there is a fair chance that True Story will feel a little too formulaic. But it’s the sickeningly realistic way in which it unfolds is that makes the limited series an interesting watch. Apart from the diluted race angle, nothing feels overly convenient. You are constantly made to think how Kid could’ve prevented any of this from happening. You are made to ponder how much of what you’re seeing about your favourite stars in real life is actually true. And if you want to know the truth about them, can you stomach it?

On top of all that, True Story features some amazing performances, with Kevin Hart and Wesley Snipes stealing the spotlight. It’s dripping with tension and atmosphere. So, if you are in the mood for all that or even one of them, give True Story a try. In fact, you know what? Give it a try for Kevin Hart. The man has done something special here.