In the popular sitcom ‘Seinfeld’, the notoriously beloved George Costanza has once said “It is like puberty that never stops.” George’s source of disgust was at ear hairs, which in turn was a symbol of the slow but constant process of aging. Pixar’s scarlet and vibrant offering, “Turning Red” channels some of that dismay of George, of course without the not-so-kid-friendly zany pessimism of the sitcom.

Like many animation works by Pixar, the story of “Turning Red” also takes the audience to the fantasy realm of the glorious make-believe, as well as touches upon some of life’s deeper learnings. The format has been highly successful for Pixar, through which the studio has been able to have viewers of all ages flock to their releases. In “Turning Red”, there is more than one layer of underlying commentary on life and the concept of change.

The environment showed and the culture depicted in the film is based on the writer (co-written with Julia Cho) and director Domee Shi’s own experience as a growing teenager in Canada. Disney has been setting many of its success stories on culture and environment that were previously alien to most western viewers. The likes of “Moana”, “Coco” and “Encanto” are glowing examples of that. “Turning Red” focuses on the Asian immigrant demographic of Canada, with the central character being a just-turned-teen girl of Chinese descent. This immediately brings a different eye to the film, even if it is structurally, and conflict-wise, similar to most of the other animated offerings of Disney.

Related to Turning Red – The Last Letter from Your Lover [2021]: ‘Netflix’ Review – Beautifully Shot, Yet Leaves Little to Desire

Mei Lee (Rosalie Chiang) is bold and determined and as vibrant as the colors around her in each frame. Her mother, Ming (Sandra Oh), a strict disciplinarian, does not have time for any frivolities. One quick montage was enough to establish the fact that Mei is quite deft at most of her set objectives, including being the perfect doting daughter to her overbearing mother. However, like any other girl of her age, like her group of friends, Mei also loves the frivolities that her mother might find too distracting or inappropriate for her. 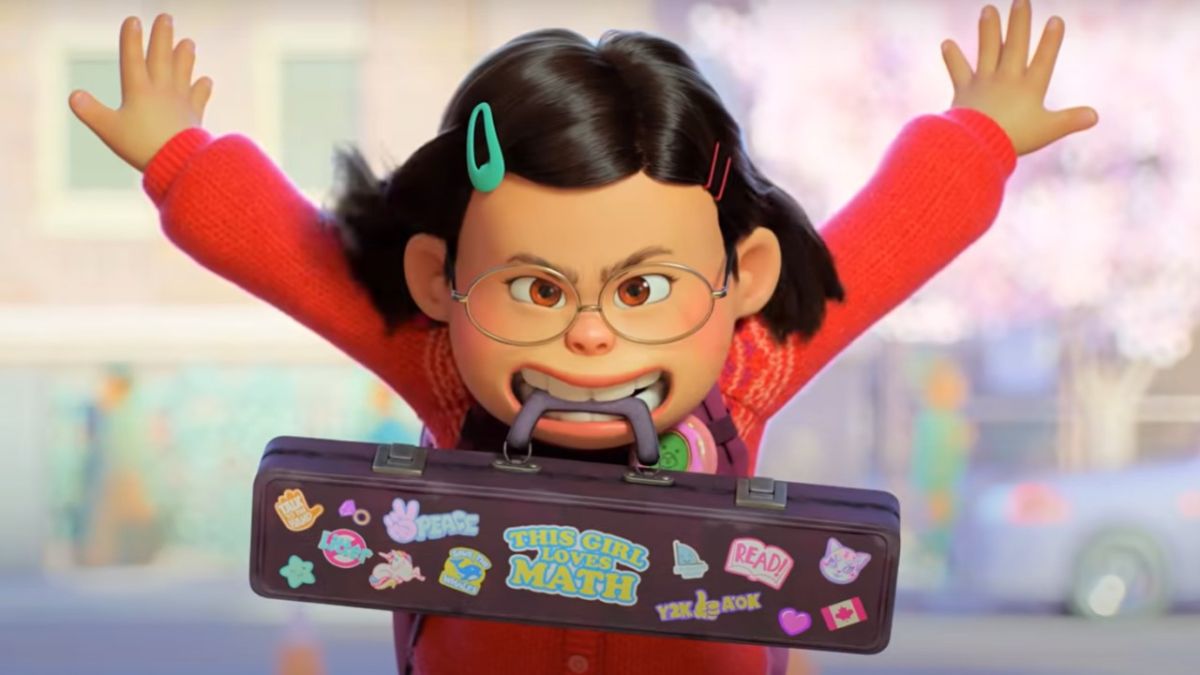 The constant tension between the longing of your own and the fearful respect you have for your parent is quite the Asian cultural trait that Shi has been able to infuse in her story. Especially the parental ability to completely disregard the space and comfort zone of their child is unabashedly, but humorously, at display here; as Mei finds out after her mother’s outburst at her crush at the local mart. Utterly embarrassed and dreading the morning, Mei goes to sleep with nightmares.

But, the next morning, she finds herself transformed into a giant red panda. Quite like a certain Gregor Samsa in Kafka’s “Metamorphosis”. But unlike Kafka’s story, this metamorphosis is not a reflection of the central character’s helpless decaying in front of socio-economic drudgery. This metamorphosis is a symbol of change which could be daunting and messy, but also a harbinger of newer experiences. And of course, “Turning Red” has a world-view reflected in its story that is as far opposite as possible from that of the bleak outlook that was seeped into the pages of Kafka’s story.

Another difference from Kafka’s story is that Mei’s transformation into the adorable red panda is not unexplained. There is a fantasy element to the story that enters the fray. There are certain elements of “Finding Nemo” and “Coco” to be found here. Mei overcoming her trademark obedience towards her mother to go towards her passion is similar to Coco’s struggle; coincidentally in both cases the passion being musical affinity. Also, Ming’s oblivious attitude towards the fact that her child is growing and capable of making decisions on her own would remind one of Marlin’s similar struggles with Nemo.

The voice cast, led by Sandra Oh and Rosalie Chiang brings the necessary chemistry and emotions, paramount for the relationship depicted between Mei and Ming. The animation is beautiful to look at, as always with Pixar. To be heavily critical, one would see the basic structural regularity in the story; however, there is always a certain leeway for an animated fare that is aimed mostly towards children. And there is no denying that “Turning Red” reflects the hopeful possibilities of change, which is not only limited to a teen girl’s bodily transformation. Like aforementioned George Costanza exclaimed in frustration, these changes would continue to pop up in our life. Our only hope is to embrace the metamorphosis.