Ultrainocencia [2022]: ‘Slamdance’ Review – A Quirky and Imperfect Mix of Performance Arts and Cinema

When Orión and Adán begin conducting their experiments in isolation, I momentarily forgot that I was watching a film. Otherwise, when one of them is seen trying to connect with a higher power using a web of strings and the other one taking pictures of the same, it could be symbolically read as man’s bondage in nature opposing Rousseau’s theory that men are free and independent in the state of nature. Unfortunately, this is not performance arts. As soon as it occurs to me that these actions are supposed to be part of slapstick comedy, I am forced to retreat my thoughts. That is where lies the problem with Ultrainocencia – a ninety-minutes long film directed by the Spanish auteur, Manuel Arija, that goes so far with its experiments, literally and screenplay-wise, that it becomes difficult for it to redeem itself as a cinematic experience.

The idea behind the film is rather simple. We have a religious institute that aims to fuse science with religion and our protagonists, played by David Climent and Pablo Molinero, have come to believe that they can connect with a higher source of power, up in the universe. To make this connection, however, they need to be able to connect to a radio frequency that matches the power course.

Unfortunately, neither they nor we know how these frequencies can be matched. So, our protagonists become guinea pigs stuck in the cog of a bigger experiment. Do they ultimately succeed? The answer is far more convoluted than you’d have the patience to sit through this absurd satirical drama till its very end. Towards the end, the director plants a few cuts into scenes from their life at home, making me sit up straight in my seat to wonder if I missed something out or were they completely unnecessary.

The film looks like it has been shot in a science lab – wires, metals, and instruments galore. Religious stereotypes from around the world abide in this space and seamlessly fuse into this lab-like surroundings. The production design is, therefore, one of the few aspects of the film that shines through. The budget constraints of the film started showing through when towards the end it dived deeper into sci-fi, almost trying to imitate Kubrick but on a trip. From time to time, a cosmic image is displayed on the screen, which looks like a Windows screensaver from the 90s. It helped catch a few seconds-long breaks between scenes of utter confusion and profound commentary. 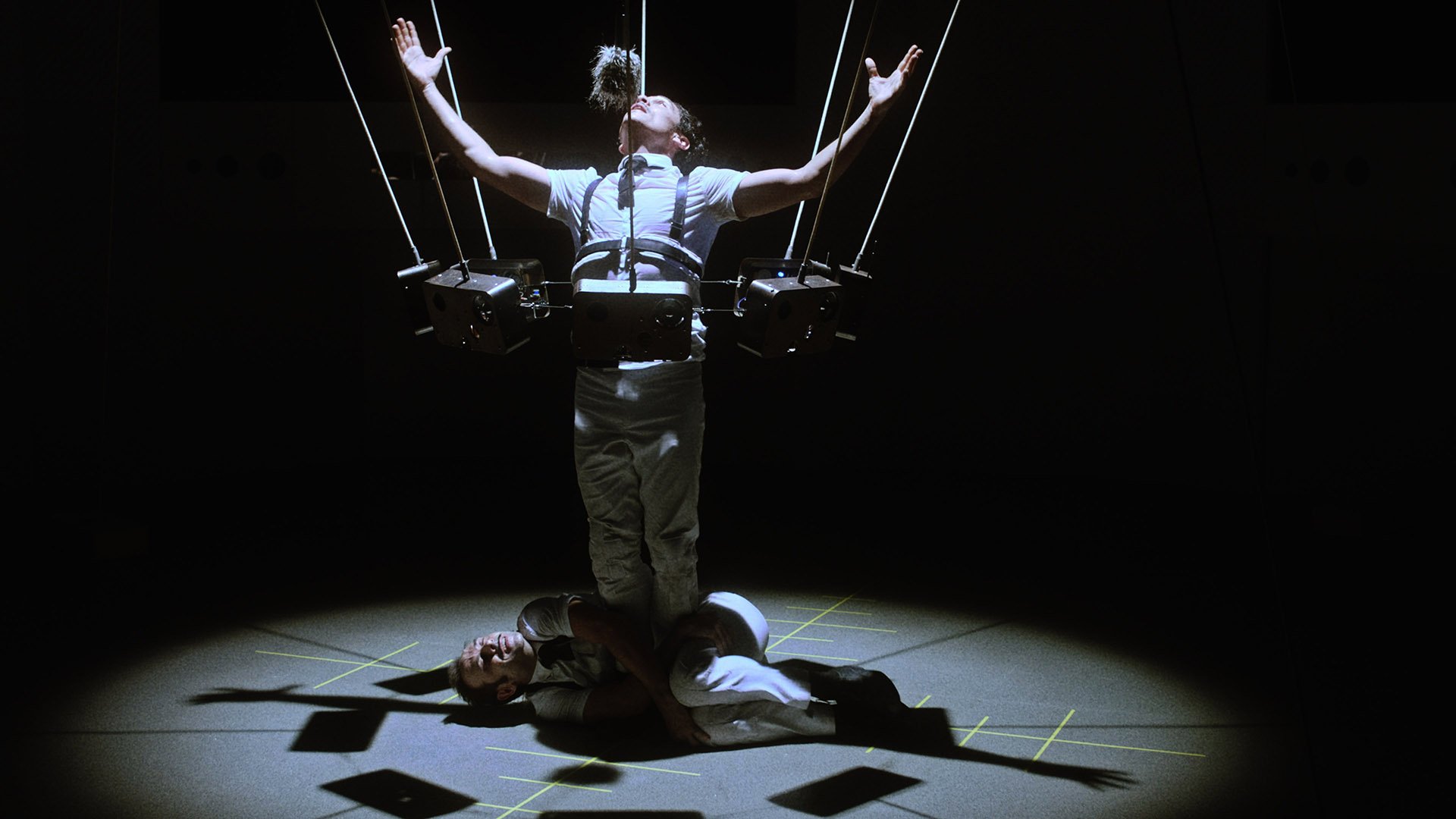 I almost started looking forward to them at a point in time. Arija is an award-winning director with a noted history of making short films and bagging awards for these curious little masterpieces. Although this one’s the first feature-long film he directs, it starts feeling like a short that has been doubly extended and triply convoluted. His works are mostly an acquired taste, and before you decide to watch this film, I’d highly recommend familiarizing yourself with their peculiarities.

David and Pablo are fantastic actors, bringing alive their characters with just enough eccentricity to tickle us from time to time. In a conversation where they discuss the message that could come through from a series of recorded dreams, I enjoyed how they acted upon the confusion of the coded message with more singing, more pondering, and more confessing that they have no ‘idea’ at all. They only work on faith and overthinking, which, I have to confess, starts getting at your nerves after the first hour. I loved their uniforms, especially the one-third tie they wore with their suits. The few feathers it sported on the back almost made them look like fallen angels with chopped-off wings. Their madness, by the end of the film, gets quite spine-chilling in a Chaplin-like-commentary way. Therein lies its minimal brilliance. Every other character is a stereotype, seemingly evil (especially the Father-figure), and mostly puppets in this drama, that is only and only concerned about the science and the motley fool characters.

In one of the first scenes, when the audience before whom the protagonists perform are laughing and then realize that they are crying tears of blood, I found the maximum resonance with as part of the audience for this film. Ultrainocencia is unsettling, not always in the best way. It sacrifices narrative coherence at the alter of filmmaking techniques and peculiarities, making it an interesting and boring watch simultaneously. It does uphold the director’s finesse in handling oddball scenarios but fails to make us see through his art. I am still not sure if I wanted to watch a film on this topic. However, if you are talking performance arts in a cosmic-themed gallery with these protagonists? I would not have to think twice.

Ultrainocencia SCREENED AT THE 2022 SLAMDANCE FESTIVAL

The Severing [2022]: 'Slamdance' Review - Calisthenics that careen into tedium

Ultrainocencia [2022]: ‘Slamdance’ Review – A Quirky and Imperfect Mix of Performance Arts and Cinema