Home»Reviews»Films This Week»West Side Story (2021) Review: Spielberg’s adaptation features an underwhelming love story that fails to capture the magic
Films This Week/Reviews

Musicals are an extravagant event on both stage and the screen. It is a genre that makes you experience magic and fall in love with the astonishing choreography, songs, and lyrics. West Side Story has been popular since its inception on the stage in 1957. Even its adaptation on the silver screen in 1961 won everyone’s praise and heart. So when the master filmmaker Steven Spielberg announced that he’s going to remake West Side Story (2021), it is obvious to keep your expectations over the roof. But you also need to be careful because sometimes those expectations become your enemy and leave you underwhelmed.

Inspired by the Shakespearian tale of Romeo and Juliet. West Side Story is a tale set in the 1950’s New York where teenagers Tony and María, despite having affiliations with rival street gangs, the Jets and Sharks, fall in love. The opening sequence of the movie where the camera pans from the torn-down buildings to the introduction of characters is quite a mesmerizing way to start and set the tone for what is to come. You’re immediately in the world, atone with the story but steadily the suspension of disbelief starts to break when the love story is introduced.

Related to West Side Story (2021) – First Look; Steven Spielberg is Remaking the Classic With Ansel Elgort

The concept of star-crossed lovers has been in trend since Romeo and Juliet. It is about love at first sight. And it is quite an enchanting experience to witness if done right. But in the case of West Side Story, Spielberg fails to capture that magic with Tony and Maria. It is the weakest part of this adaptation and quite disappointing since it is their love that sets the game afoot. The issue with Tony and Maria is the little to no chemistry between Elgort and Zegler. Whenever they’re together the scene falls flat and takes out of the flow of the movie. 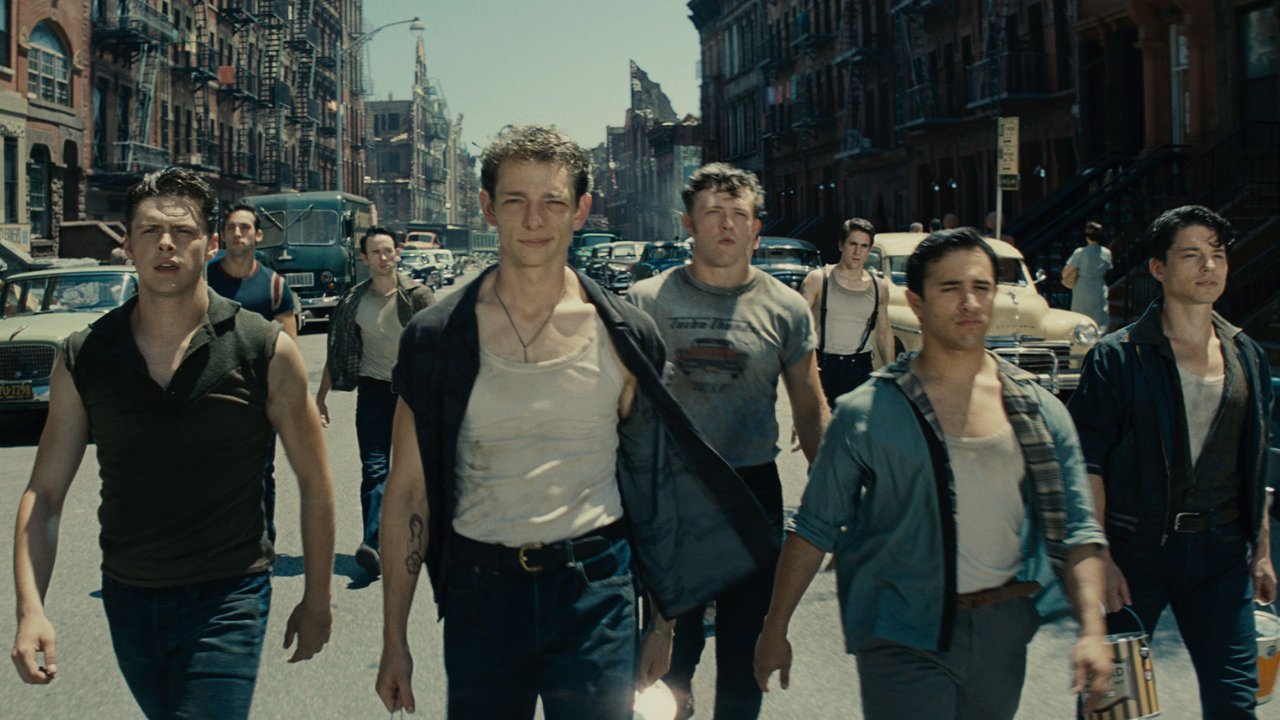 But when it comes to individual scenes Zegler is phenomenal as Maria. Her voice is beautiful to hear and you can see the charm and fight she brings in her character. But it is the opposite for Elgort. He plays Tony very ordinarily like you can replace him with any actor in the world. At no point do you feel for his character or the change he has brought in himself after spending a year in jail. And there is one scene where he has to break down after hearing the most devastating news, and the only reaction you can give there is to laugh out loud. Spielberg tries to give the reaction a minimal screen time but it’s just so funny to watch.

West Side Story stands tall with its astonishing musical sequences that are stunning to witness. You can see the hard work put in by the cast in every beat and frame. Adriana DeBose who plays Anita steals the show whenever she is in the frame. Even David Alvarez who plays Bernardo and Mike Faist who plays Riff are exceptional in their characters. The rivalry between the gangs, especially the concept of angry young men, brought in a bad world is the story Speilberg should’ve gone on with rather than the parallel love story or should’ve cast someone better than Elgort to lead with Zegler.

Also, Read – Spielberg (2017): A Modest Storyteller vs The Spectacle

Spielberg presents the broken and cruel world that moves on and leaves behind the minority and the poor like they’re not even human. The city is progressing, the Jets and Shark are rumbling for territory which is soon to be taken away no matter how hard they fight. And their division is not helping anyone, especially the people they love. The story desperately wants to prove that love and being together is the way forward but Spielberg and screenwriter Tony Kushner fail to capture that. Spielberg relies on the grandeur of nostalgia of the original adaptation and tries to hide behind the extravagant musical sequences. But when the movie arrives in its final act, it just falls apart in every direction. Everything seems maddening, especially the reaction and decision taken by Maria.

West Side Story is a spectacular event that sweeps you off your feet with its musical sequences, aesthetic, production design, and cinematography. It is a tale where you might fall in love at first sight with the melody that flows with lyrics from the great Stephen Sondheim. But as you spend time with it you start to find the cracks within and realize how underwhelming the story is. The ensemble cast is incredible except for Elgort. If you love musicals West Side Story is a treat but if you aren’t, then it is better to skip it.

Back to the Outback [2021] Review: A Generic Road-Trip Celebrating the Misunderstood Creepy Crawlies of Australia