I am still a tad bit dazed after watching Houman Seyyedi’s Jang-Jahani Sevom, AKA World War III. Mostly because it excelled at subverting the expectations game that most audiences play. The English title “World War III” is eye-grabbing, without question, with your instincts raring for a movie delving into a fictionalized future war, a science fiction parable to be exact. But as you browse through the synopsis of World War III, you as a viewer are led to believe that you would see a day laborer working on production for a World War II movie while simultaneously sheltering his secret lover. That should kindle your interest, especially if your interests align with mine regarding filmmaking dealing with meta-narrative or Russian doll methodologies of storytelling.

I am inclined to believe that director Houssan Seyyedi played with our expectation of watching a meta film, because “World War III” is decidedly not just about that. World War III follows Shakib, a day laborer who lost his wife and child in an earthquake a few years ago and is still wracked with grief. Within the next few years, he strikes up a relationship with Ladan, a deaf and mute sex worker. He works and sweats at a construction site when one day he is forced to act as one of the prisoners in a concentration camp. It finally dawns on him that he is working in a production of a World War II movie (a badly made and inaccurate one, which the movie doesn’t hesitate to point out).

Things start to improve when the producer of the movie notices him after Shakib saves him from an accident. The producer wants him to help around the production temporarily, which slowly crystallizes into close permanency when he is selected for the role of Adolf Hitler by the director (after a hilarious sequence where the previous actor suffers a heart attack while in character, walking towards the caged prisoners, the prisoners looking at him and wondering whether this is part of the act).

However, as tidings start relatively looking up for Shakib, his lover Ladan asks for shelter from her pimp, due to which Shakib hides her beneath the foundations of the “Red House”, where he sleeps at night. He is unable to escape the wrath of Ladan’s pimp, after being manhandled and beaten and threatened to pay 150 million dollars in remuneration. Shakib manages to procure 20 million dollars from the film producer but tarnishes the goodwill he had built up in the process. While returning, tragedy strikes when he sees the red house being blown apart by the film crew as part of a sequence. The fiery inferno of the house also signified the burning embers of the last traces of happiness Shakib had, and what occurs after is a significant unraveling of his character.

The expectation of a meta-narrative about the film production or filmmaking of the World War II movie is met judiciously by this film. There are hints, jokes, and even a semblance of black comedy, most notably signified by Shakib being screen tested for Adolf Hitler with a hangdog face, unable to discern what is happening, but choosing to go with the flow nonetheless. We see a sequence where the director tries to ease Shakib in to understand the “mindset” of Hitler so that the scene could be effective. We hear hushed whispers among the crew stating that the movie is inaccurate and that the director doesn’t know what he is doing. 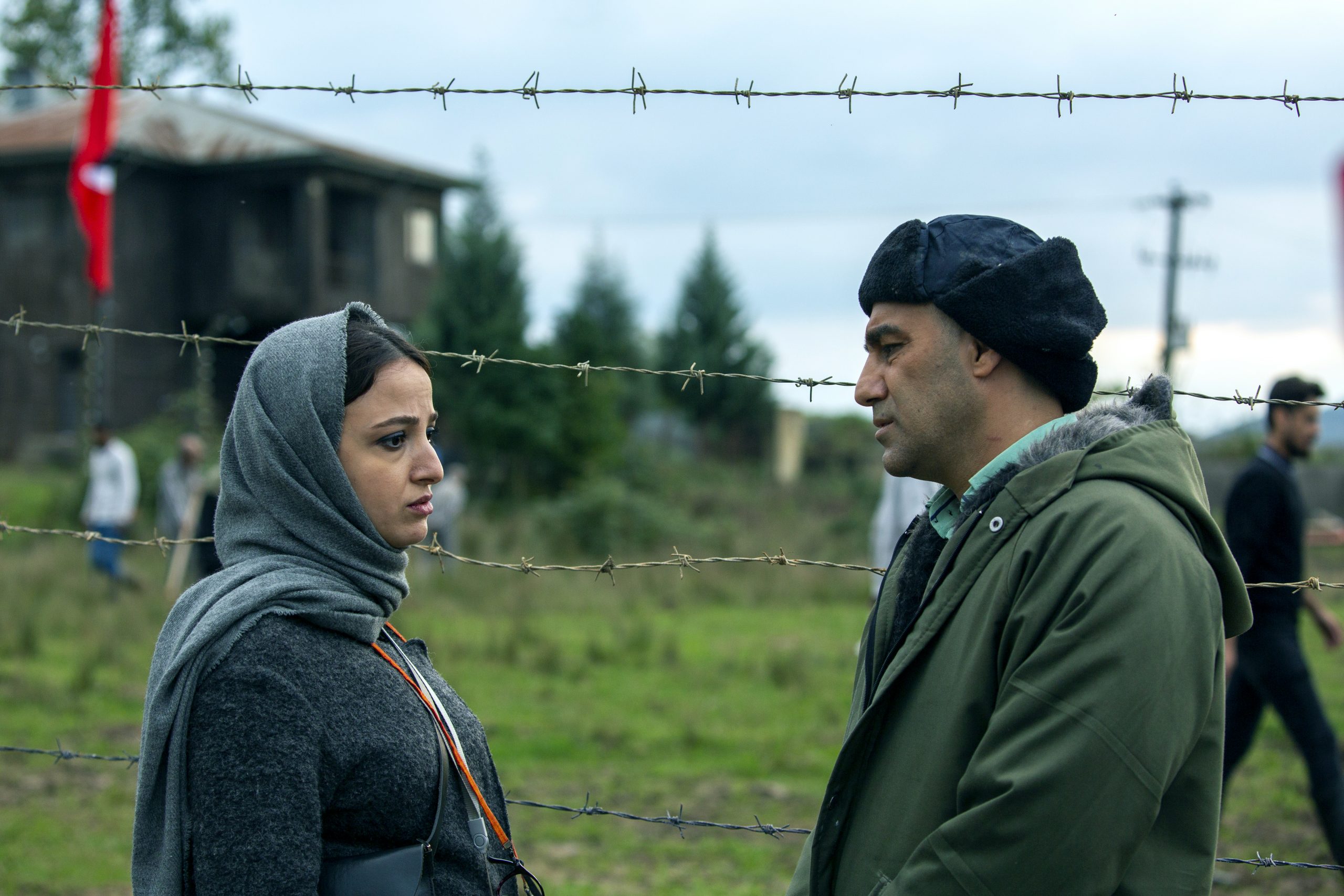 These touches are fascinating flourishes in setting up this world of high budgets, make-believe, and exploitation disguised as artistic integrity. The conflicts that Shakib faces are real-world issues breaking through this constructed World War II reality, which completely bursts wide open as tragedy strikes. Seyyedi and writers Arian Vazirdaftari and Azad Jafarian are also interested in the mini hierarchial skirmishes among the laborers. Shakib gets drawn into a subtle fight for dominance between him and production assistant Hassan, who is already at loggerheads with Shakib because Shakib takes the job meant for Hassan’s cousin.

As time passes and Shakib becomes part of the crew, he feels “on top of the world”, able to vault over Hassan’s superiority, until the conflicts and later the film crew’s anger and general attitude at brushing the accident off make him realize how the world would never allow him to progress. When asked, “Where was the corpse?” Shakib shouts, “She had a name.” It becomes a battle of fighting for his and Ladan’s rights and retaining their humanity, even as circumstances try to make him question Ladan’s veracity and character. Temptation and people at higher-ups threatening to seize away “his opportunity of a lifetime” fails when Shakib boldly proclaims that he has nothing to lose, only for a reality check to come crashing down on him when contractual obligations come into the picture. This is not even me considering what happens in the end, which might feel like a sudden turnabout, but it also entirely tracks Shakib’s character reaching his absolute breaking point.

“World War III” as a movie wouldn’t be remotely compelling if not for the multidimensional and fantastic performance of Mohsen Tanabadeh as Shakib. Eagle-eyed fans would recognize Tanabadeh in Asgar Farhadi’s “A Hero” as Bahram, one of the primary “antagonists,” but here Tanabadeh is essentially a one-man show. From the opening of the movie, where Tanabadeh’s Shakib is interacting with Ladan in ASL, to the final frame, where he walks back in his Hitler garb to the lunch table, he is mesmerizing in the film. There is a hidden vulnerability and sadness in his eyes, which slowly bubbles over and completely boils over as tragedy strikes. It is perhaps symbolic that Shakib is chosen as Hitler or that the director’s instructions become far too embedded in Shakib’s psyche because as his character reaches his breaking point, the choice he makes is eerily terrifying. And Tanabadeh sells it completely.

The conviction in his performance is only matched by the sound design, which manages to heighten the chaos of the film set or the abject terror of the prisoners within the film’s narrative. The movie, however, slacks a bit during the second act, when it feels like the story is delving more into the adventure and romance aspect of Shakib and Ladan. It finally righted its course and returns to its compelling structure as it reaches the hour mark and tragedy strikes in Shakib’s life.

“World War III” works as a story of the rise of an anarchist in a small fascistic regime. The film production evokes the feeling of a failed totalitarian regime, where the producers and the directors are seated atop their pedestals and choose which of their desired “underlings” they want to promote, with the caveat that they can push them back down at the drop of a hat if it suits their narrative. This is not even considering extenuating circumstances which don’t affect the people in charge beyond a minuscule amount. But as the movie ends, we see or hear the fall of this regime, in an implied and horrifying fashion. In an era of filmmaking where even ambiguous endings have become predictable, the choice to at least let the audience be cognizant of the finality of the story is an appreciable and impactful move.

WORLD WAR III WAS SCREENED AT THE 2022 VENICE FILM FESTIVAL